Sacha Archer : A B C D E, by Charlotte Jung 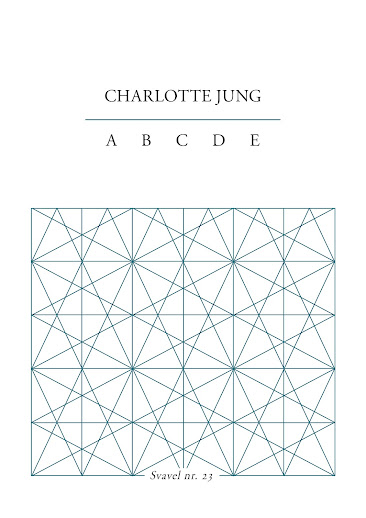 Charlotte Jung’s strongest work is narrative. Actually, by the very nature of her concrete poems’ construction all of Jung’s work is narrative, even in the case where a poem is an individual event. It is the suites which I am referring to when I say narrative, a distinction which must be made due to the performative mode of her style. Much of Jung’s work which I’ve read focuses on a single word (occasionally letter) as poem and it is by the arrangement of the letters on the page, whether it be a choice of spacing, font size or rearrangement of letters that the performative occurs, the word blooming from its constituent parts and becoming both the word for and a depiction of the signified. In other words, Jung is working in a classic mode of concrete, returning to the very beginning of modern concrete poetry. But I mentioned suites, so I must amend what I’ve just written and return to my first sentence. Jung’s poems, individual words, are often used as building blocks to create a narrative. Well, yes, this sounds rather familiar, using words in sequence to create a narrative, but of course we are dealing with individual concrete poems, rather than traditional verse or prose.

Jung’s recent chapbook, A B C D E, published by Trombone, is a work of halted narratives which focus on the journey of conceiving a child, a child’s eventual birth and development. Each word/poem which makes up the suite enlarges one letter of each word used. For instance, the initial poem is a large capital A in the counter of which is placed the word void. The suite can be understood as essentially five sections, each focusing on the letters which are presented in the title of the work, hence, section one is A, section two is B, etc.

The title of the work suggests the realm of the child with the simple building blocks of language while also pointing at the notion of a smooth and effortless progression, as in, as easy as ABC, but we soon find that the narrative progression is anything but easy or smooth. The initial section, which focuses on and enlarges the letter A/a depicts/narrates the process of impregnation to the terminus of abortion. The first poem, as I mentioned above, consists of a large capital A in the counter of which the word void is placed. It is either the word Avoid or the phrase A void. Depending on one’s interpretation it is either a warning to avoid (presumably insemination,) or, which seems more likely, a depiction of a feeling of emptiness, or, a void, and the more literal emptiness of the womb without child. On the next page we find the word penetrate. Importantly, it is not penetration which would communicate the act, but rather we are met with what seems to be a command. Again, the letter A (though, this time lowercase) is much larger than the rest of the letters of the word and like all the poems in the A section the A’s counter is used to represent the womb. The remaining letters in the word penetrate suggest a penis entering a woman. The following poem is problematic in that it is the word infant, the fragment infnt placed within the counter of the large A, which we’ve established represents the womb. Of course, an infant is not found within the womb, but rather outside of it, while the baby in the womb is referred to as a fetus. What are we to make of this? Is the counter of the A in fact not the womb? But it must be, as the following poem is the stark Abortion, in which the counter of the capital A of the initial letter of Abortion again represents the womb, bortion having been placed at the bottom center of the A leaving the counter (womb) empty, and the stroke and stem of the A signifying the splayed legs of the mother, while bortion, itself clipped, is the terminated fetus. 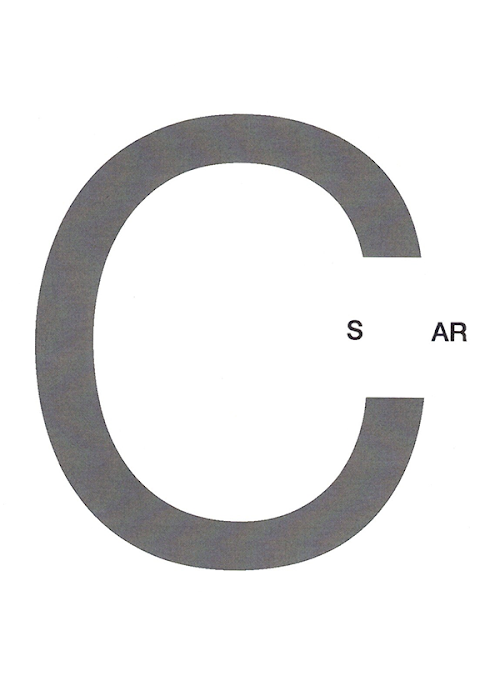 The extreme brevity and minimalism of section A (and this will prove true for much of the book) renders the narrative stark, cold, removed from emotion, almost medical—except for that initial A void which can be read as an emotional emptiness tied to the physical. Without the infusion of any subjective experience, we as readers have to ask from what perspective are we witnessing this process?

Much like section A, section C finds the reader faced with an equally removed perspective, a statement of facts. This section begins with C-section. The large capital C dominates the page as it does for the remainder of the section. Within the aperture of the C, Jung has placed -section performing/depicting the incision. The next poem is the word Cavity, avity being placed within the again empty womb of the C’s counter. Turn the page and the same large capital C meets us and the body has healed: we find the word scar. The aperture of the C flanked by s and ar highlights and defines the white band of empty space which ingeniously is rendered instead as the white, wholly present scar. Concluding this section is simply the word child in a rather large font size, but otherwise unaltered. The baby has been born. This might be a wonderful event, but oddly, because of the recuring state of remove that these poems embody, there is no emotional quality to the event. Also, the reader is not given much opportunity to have an opinion. We witness events which occur to the body as if perusing images in a medical textbook. Assuming, as we must, that this removed, or objective, perspective is intentional, the crux of the entire suite seems to lie in the question of why we are regarding these events from this angle (the ironically invisible narrative of this work).

The remaining two sections of the suite, D and E, shift to focus on the life of the child and how the poems perform also alters. These poems take on more of a subjective, emotional tone as, save for two of the E poems, we are not witnessing events, but rather impressions. Take the second poem of section D. The word we encounter is Daddy, the capital D dominating the page while addy lies small beneath it. The large D is not performing an event, nor is it (just) an image of the body. Yes, it can be the size of the father, his figure, and if we regard it from this perspective, it is, unlike that uncertainty of perspective previously encountered, through the eyes of the child that we are witnessing. But, this daddy, much like the apple in Magritte’s La Chambre d'Écoute (1952) takes up far too much space, is suffocating, and larger than life—and it is these tones of the subjective in the latter half of the book which take us by surprise, suggesting a plethora of possible narratives.

In the same vein, the final poem invincible uses the very same technique as Daddy but it is instead either or both the image of the child who has grown and/or the feeling of confidence and invincibility which we read. With invincible, Jung has placed the fragment vincible sitting above the enormous concluding E and that E is strength and power (however hyperbolic). It is a fitting final poem as it suggests a circular reading: from the arrogant invincibility of youth that has yet to realize mortality right back to the initial poem of the book, A void, where emptiness has crept in, and mortality is about to rear its head.

COUNTER: The open space in a fully or partly closed area within a letter.
APERTURE: The opening between the counter and the outside of the letter.
STROKE: The main diagonal portion of a letterform such as in N, M, or Y is the stroke. The stroke is secondary to the main stem(s). Some letterforms with two diagonals, such as A or V have a STEM (the primary vertical or near-vertical stroke) and a stroke (the main diagonal). 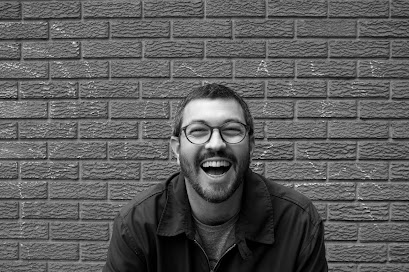 Sacha Archer lives in Burlington, Ontario with his wife and two daughters. Recent publications include Mother’s Milk (Timglaset), Hydes (nOIR:Z) and Jung Origami (Enneract Editions). His work has recently been included in the anthologies Mouth of a Lion (steel incisors, 2021) and Watch Your Head (Coach House Books, 2020). He has two chapbooks forthcoming, Immortality (Viktlösheten) and KIM (knife fork book). Archer’s concrete poetry has been exhibited internationally. Find him on Facebook and Instagram @sachaarcher, or on twitter @sachaarchermeat