from Report from the McCarthy Society, Vol. 1 No. 1

I walked into Pattie McCarthy’s Introduction to Creative Writing classroom on a warm day during my earliest months as a new immigrant in this country. I was 18. She was teaching at Towson University the year the Twin Towers fell, the year I was beginning (I now realize) to confront an inheritance I had never asked for - a pulsating thing of felt and fur, pyrite and plume—that I would first learn to live with safely (I now realize) in her classroom. All the mineral facts of American poetry[i]. Pattie was my first teacher of USAmerican poetry, and also the first poet who saw me as a poet. Someone, as she said, she would read. I took her at her word. And she took me at mine.

When I write, there is always a part of me still in that classroom, which she shared with Kevin Varrone. They both taught with astonishing seriousness, utter preparedness, and laconic mischievousness. As the weather cooled, Pattie wore memorable, sturdy fabrics—surfaces that appeared knitted and arranged by hand, scarves that seemed to extend the voice from the page through the neck like Erté’s sublime alphabet. Her hair was more than an aesthetic. It was a whole custom. She shared her cigarettes. She taught me how to stir a gin and tonic with a knife. She was a staunch reader of effort and of good intention even where it got caught in the crosshairs of trend or ornament. She was serious about what I could do and serious too about what I probably ought not to.  She was right about both.

Kevin and Pattie made poetry into a home for me by welcoming me into their house in Baltimore, which they were building while teaching at Towson. The analogy between composing a poem and building a room is not merely stanzaic, for me; it is the architecture of my introduction to contemporary American letters, after a lifetime of being steeped in the British canon in Singapore and India. There, in Pattie and Kevin’s half-built living room with a big (?) red (?) couch (?), there would be room for me. And kumquats! And pasta made with the meat of Dungeness crabs! And there would be poetry to gorge on. There, I could “act so that there is no use in a center”[ii]. I was so hungry and they both fed me. And—importantly—they returned my workshop drafts with feedback, wrote me notes that said: “You would probably love X,” and slid silky copies of Beautiful Swimmer Press chapbooks into my messenger bag[iii].

And then, there was all the rest Pattie brought, in her sharply composed syllabus, her poised feedback, and her own arresting, important poetry, which all arrived to me the way color, shape, and sound arrived for Nabokov, in knotted whorls, on wharves where symbols are loaded and unloaded[iv]. I will try to unravel them the best I can, two decades later:

I remember reading Myung Mi Kim’s The Bounty in cool, rainy weather for Pattie’s seminar, where I discovered that sound and sense have a non-arbitrary relationship. Years later, I heard this lesson echoed in Pattie’s attentiveness to sound as a signifying wholeness, as a sturdy, trusty relation with signification, in her consonants that are both velvet muffle and loud daylight. In her poems, her ear is so alert, her eyes follow what story a shadow of a word can tell: “a weather eye out & ears on the barn/ so that we all remain well within sound / the shadow of a bird in the grass over/ a sparrow in the grass tricks the weather eye / like Sunday in its doubled movement”[v]

I remember reading Susan Howe’s The Nonconformists Memorial in her seminar, where I learned the pleasures of etymological discovery. Years later, I found it again in her astonishing devotion to the history of lexicons and grammars, in prose assemblages where I return to re-learn the use of language for pleasure beyond purpose.  I share her love of “the daylight meaning of words” (as Reznikoff said), the way children love marbles for the history of sand they enshrine in glass. In her poems, one nests within the luminous architecture, head tilted up to each word. I will always admire her long commitment to holding and spinning a word with tongue turned into spool: “your own great vowel / shift, the nucleus of a syllable – your tongue has spent the night in its dim sack”[vi]. My admiration has also become a method: a compositional diligence, and a posture of enquiry at my own desk.

I remember reading Lyn Hejinian’s My Life in Pattie’s workshop, where my life changed forever and I became one of those who love to be astonished, incurable in my need for serial forms. The scenes in Pattie’s work are so often electric with the particularities of weather or sculpted to suggest the tone of a season—“all we can really share with people is a taste for the same kinds of weather”[vii]. Equally, I become astonished by the many splendid, unforgettable bodies and personae across her oeuvre. They linger as unforgettable kith in albums that are never allowed to gather dust but are examined with studious and generous attention. They are painted with an eye that is tender and comic—“hands like two balloons, fitfully/ sleep comfort-close”[viii]— or severe, knowing, and frank— “your bitten fingernails, your sermon-crooked mouth, your iodized preservative”—or deliberately stoking the narrative drama— “& so your eyes are painted the color of a dark coat at night, frantic with absence & struck by return”[ix]— or just so damn audacious— “& I’ve never seen / anyone so casual about apples// pouring forth”[x].

I remember when, in her class, I suddenly learned of the pert gesture of the ampersand, and then, more slowly, its inescapable elegance (“difference between high/ & low & sea & sky & light [extraordinary tides, np]); I remember when I learned the open assertiveness of the colon, like a palm arriving near the face: to do what?

I remember that when she read her own poems (I first heard her read at the Kelly Writers House—maybe near CAConrad), hearing her voice was like walking into a cave which had turned inexplicably bright. Perhaps because of an opening that had raised an ancient oak at its heart, each ring showing the year of rain, the year of draught, the year of light, the year of fire in which the throat grew by rubbing breath and silence around something carving itself—“this creature means it with her whole mouth / & by definition one cannot get / any closer to the offing”[xi] The same year I read (because of Pattie) Anselm Berrigan and Barbara Cole. And then, of course, my head came right off and I carried it in my satchel full of rolled up Poetry Project newsletters that she had given me.

And I remember learning in her work the importance of the well-plucked objects, how they make persons more particular, how they invent a prepositional or emotional or causal relationship or proffer a story—“a bird killed in the yard—feathers (white, / unusual) hither & thither”[xii]. This mattered to me so much, as a newly unparticularized, newly troped, newly immigrated creature, still soaked from the swim across. It mattered to me, and still very much does, that there are particulars to any life that must be documented—in objects that live as and in the flesh. In my years as her student, I remember reading Oppen, Berrigan, Stevens, and Williams, and paying attention, as she taught us, to the sad marvels[xiii], to the Pepsi[xiv], to the concupiscent curds in kitchen cups and the horny feet[xv], to the eye of the blackbird[xvi], to the purple blemish[xvii], to the whole damn unmanageable pantheon[xviii], of which we poets, terrible managers of almost all else, become the custodians. Pattie writes: “I held tightly in the rain / to the railing, & that’s how my hands smelled all day after.[xix]”I have held tightly to these lessons & that’s how my hands smelled a lifetime after.

Twenty years after that first semester as Pattie’s student, a part of me is still in that first classroom. That part pays attention to diction as an alchemical substance, to persona as an earned mask and a wagered shibboleth, to music as the voice’s vehicle, to the beams of a poetics being built with dogged conviction—as the first and final thing. Her lessons were the sapwood that eventually turned to heartwood—the spine of my work now. The ease and confidence in my self-image as a reader and writer of “American poems” I owe to my earliest readers in the United States—my teachers Pattie McCarthy, Rachel Blau DuPlessis, Jena Osman, and my peer, the Canadian poet Sarah Dowling—who, within four years of my time in the United States, had read me into my own sense of self because they were generous and undisciplining disciplinary masters who were more invested in what I could invent than in what I could mimic. Since that first workshop with Pattie, I took several more classes with her in Linthicum Hall and wrote several (OK-ish, sometimes maudlin, sometimes smart) poems in my 4th floor apartment overlooking a parking lot, where I smoked Gauloises and tried (and failed) to look the part for a part that had not yet been (I now realize) written for me in American poetry.  Her greatest gift to me, as my teacher, was not deciding it for me.

The footnotes refer to texts that I read while in Pattie’s courses, either because she assigned them were assigned or made it necessary for work she had asked us to accomplish. My thanks to rob mclennan for this gift of an occasion to recall and for his nimble scouting for a few evasive citations. 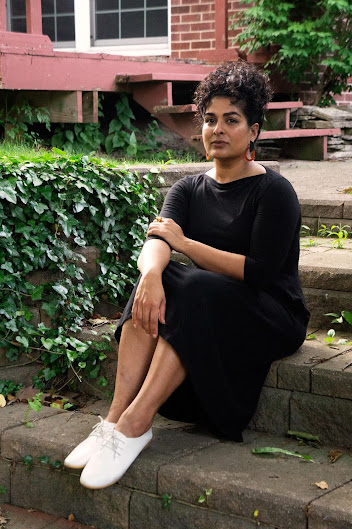 Her work has been translated into French, German, Spanish, and Czech. She has been a Mark Diamond Research Fellow at the U.S Holocaust Memorial Museum, a Riverrun Fellow at the Archive for New Poetry at University of California San Diego, and a Writer in Residence at the Los Angeles Contemporary Exhibit (L.A.C.E.). Her work has been performed and installed at Museum of Contemporary Art (MoCA) Los Angeles, The National Gallery of Singapore, the Los Angeles Contemporary Exhibition (L.A.C.E.) and the Museum of Modern Art (MoMA).

She has been an editor at Jacket2 (United States), Ethos Books (Singapore), Invisible Publishing (Canada) and Book*hug Press (Canada).

She is currently an Associate Professor of English at Michigan State University.