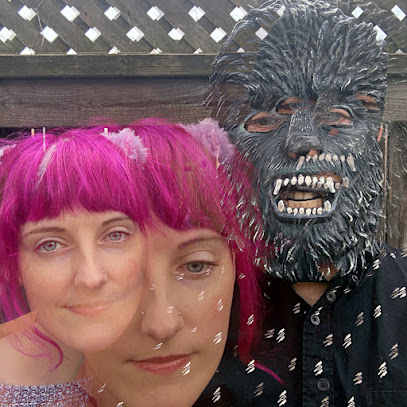 MA|DE is a collaborative writing entity that was co-founded in 2018 by artist/designer/poet Mark Laliberte and writer Jade Wallace. MA|DE's work has appeared in dozens of journals including Vallum, Poetry is Dead and PRISM International, and has been collected in three chapbooks. With the support of the Canada Council for the Arts, MA|DE is currently at work developing their Collusion Books chapbook A Trip to the ZZOO into a full-length poetry manuscript, to be titled ZZOO. Visit us at: ma-de.ca

A Trip to the ZZOO is the second of three published collaborative chapbooks. How did the project begin, and how did the form of the poems emerge? How were the poems formed?

A Trip to the ZZOO was born out of our earliest writing together as MA|DE. That was a time when we wrote quickly, exuberantly and without much of a plan, other than to explicitly frame everything we produced under a blended moniker that represented our joint authorship.

We worked on several poems at one time: one of us would write a line or two to begin, the other would add to take it further along, and then it would be returned, an oscillation; we broke our patterns as often as we adhered to them, interjecting lines wherever they fit or forcing them in to complicate things, to avoid a sense of strict pattern. Basically, it was a kind of chaotic, back-and-forth building. When we had nothing else to say, we would stop and move on to new poems.

Many of these early poems were picked up by literary journals, and we dimly thought we might one day try to make a book, but with no specific plan to do so. It wasn’t until Collusion Books came into being, with its collaboration-focused mandate, that we first thought seriously about how we might turn our growing pile of disparate works into a cohesive chapbook. Reading through the dozens of poems we had written to that point, we noticed a certain creaturely motif in high concentration (perhaps one of every four works in the archive) that we hadn’t been aware of as we were writing. We brought all of those animal-adjacent poems together and found we had enough for a small collection, A Trip to the ZZOO, and thankfully Collusion took it on.

I know you’re working towards a full-length manuscript, but do you approach each chapbook as a self-contained work, or are you excerpting from your manuscript-in-process to create chapbook-length manuscripts? What is your unit of composition?

We feel there are two reasons to publish a chapbook: to capture something self-contained — Test Centre (ZED Press, 2019) falls into this category — and to concretize a moment along the path to a larger work. A Barely Concealed Design (Puddles of Sky, 2020) and A Trip to the ZZOO both represent this latter kind of thinking.

In the case of the animal poems, once they had been accepted for publication as a chapbook, we thought, well, why not a book? We realized we wanted this chapbook to be a gate that would lead somewhere bigger, so we titled it in a way that hinted at a larger whole. The full ZZOO manuscript is still in progress at the moment, and we were deeply fortunate (and surprised!) to receive a grant from the Canada Council for the Arts a few months ago to complete the project. Currently, we are collecting articles & ephemera related to animals to give us some jumping-off points into new poems … the writing is more territorially defined now, and so we’re trying to wander a bit less. As we work to complete the book, we feel we know where we’re going.

We have never envisioned the poems as animal-gazing spectacles. The odd spelling of ZZOO is a signal to the reader that this is not your traditional zoo; instead, what we are trying to do is find new ways of looking at animals. Our gaze might always be human, but that doesn’t mean it has to be voyeuristic or exploitative. Instead, these are poems about perceiving humans & animals as integrated parts of the same world. We are all living in the ZZOO.

How does this collaborative project interplay, if at all, with your individual works?

Our individual works take us to completely different places most times. Mark makes experimental comics, visual poetry; he’s recently been exploring haiku. Jade just wrote a novel! While the ZZOO project may overlap thematically with some abiding concerns in our individual works — Jade, for instance, explores ecocriticism and ecopoetics in fiction as part of their solo practice — it really is a body of work that decisively belongs to MA|DE. We have always seen MA|DE as an entity unto itself. If you read the poems, we suspect you will be hard-pressed to identify which lines were written by Mark and which were written by Jade; sometimes we can’t even look back and identify our own paths through the writing accurately. Our poems are not a dialogue between two voices; MA|DE has a voice of its own. And this is not a one-off collaboration between two solo practitioners, but an organism we intend to sustain long-term.

Having said that, the pandemic has opened up some surprising individual/collective overlaps here at our home base. We’ve had a lot of time on our hands to contemplate, rationalize, explore; and ironically, even though ZZOO remains a pressing work-in-progress, at the start of 2021 we also began to develop our next major body of writing.

Waste Not the Marrow is a hybrid manuscript that fuses visual & textual elements and blurs the lines between our solo & collaborative work. The visual side of things focuses on presenting complicated, vertically stacked collage-sculptures, some of which Mark was working on long before MA|DE existed; these artworks were accumulating in the studio, but never really had a raison d’etre (for whatever reason, he’s never felt comfortable showing these particular works in gallery scenarios) until we decided MA|DE could/should/would write to them. So they function both as his solo works and as our starting point: strange objects that we are exploring & animating through language, kind of an exercise in self-ekphrasis but also a real push into hybrid territory.

Have you any models for the kinds of work you’ve been attempting?

Collaborative writing, while being a time-honoured practice (consider, for example, the Japanese collaborative form renga, which likely dates back to the sixth century), remains a rapidly-expanding field, which is thrilling both to watch and to be a part of.

In terms of what we’re attempting with MA|DE, we sometimes feel positioned at a somewhat odd angle when comparing ourselves to other writers interested in literary collaboration. We love what someone like Gary Barwin is doing for the scene; he seems eager to collaborate with multiple writers within his circle — recent projects have popped up with derek beaulieu, Gregory Betts, Penn Kemp, Tom Prime — and the publications he produces through these collaborations have a playful, inventive streak that always excites. There is an element of jazz/improv to what he pursues, the literary equivalent of getting a few talented people into a studio, pressing record and then seeing what happens (at least that’s our take on the writing). This seems representative of the most common approach to collaboration at the moment, which is to compose as a duet where the individual voices are left clear, willingly exposed. We understand the joy in that approach.

By contrast, however, we are most crucially looking to establish a singular voice for MA|DE, to seek what William S. Burroughs called (in relation to his collaborations with Brion Gysin) a third mind — “the complete fusion in a praxis of two subjectivities, two subjectivities that metamorphose into a third”. This is something that’s hard to manifest, and it can only be nurtured over time.

From that vantage point, many of the models that we most admire seem to exist outside of the field of literature, long-form collaborations that seem to be more common in the art world. For some excellent Canadian examples, we look to the bodies of work developed by General Idea (active from 1967 to 1994, comprised of AA Bronson, Felix Partz & Jorge Zontal), Public Studio (the multidisciplinary, collaborative practice of filmmaker Elle Flanders & architect Tamira Sawatzky) and FASTWÜRMS (the cultural project, trademark and shared authorship of Kim Kozzi & Dai Skuse — who, incidentally and influentially, were Mark’s MFA thesis advisors at the University of Guelph).