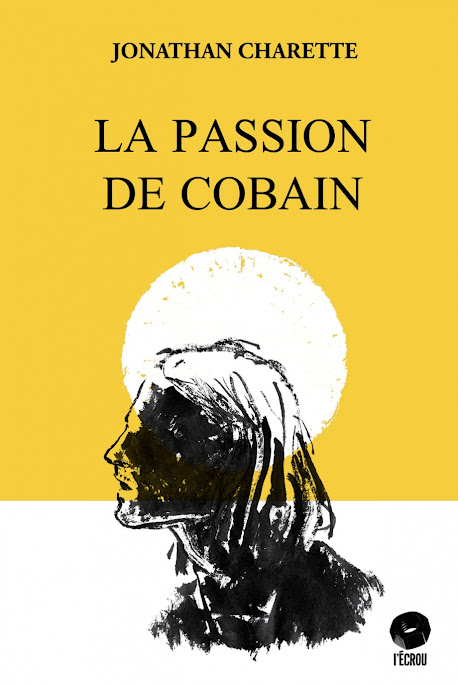 Now, I would never had thought of starting a book of poems centred on Kurt Cobain with a quotation by Leonard Cohen as an epigraph. And using it directly in English, after dedicating the book to his parents, certainly sets the tone for Jonathan Charette’s La passion de Cobain (Cobain’s Passion). There is an immediate access to experience from where we are (in this case, Montreal), regardless of languages spoken.

In part, I am sure, because of the repetition of the same images, but not wholly for that reason, I remember clearly learning about Cobain’s death, watching people on TV looking busy around his house, as I stared intently at the inside of the room where he lay, the mess of it all. I was a Nirvana fan, even though I didn’t get much of their music, let alone what was happening – I was too young for that. I did love the chaos, even though it embarrassed me. I had a hard time accepting that Cobain used drugs, I didn’t understand this whole suicide thing. I knew people did it, I just hadn’t been confronted with it yet. Nothing shifted in me on April 5, 1994, but the event certainly stuck with me.

Charette was young too. He wasn’t a fan, didn’t really know Nirvana when Cobain died. But he was aware of his death at the time, and seems to have become a fan in the following months. Really, he discovers how certain kinds of music can beautifully wreck you – something that Bon Jovi just could never do. I suppose I only had a few months on him, the advantage of age. We learn this, about Charette or a version of him who speaks (minus my own experiences) in the first few poems of this focused, ambitious collection. These poems chronicle a passage, a transformation, in plain, direct language, with sparse use of poetic devices – usually one or two strong metaphors or images per page. The first section marks time, skipping a few months in between each poem, giving a sense of what it was like to be a teenager in Québec in the mid-90s. The crowd Nirvana brought you to, if you were serious enough about music and about your generalized disgust.

The poems would work well even for readers without that shared intimate experience of space and time – but to get the full charge of each poem in the first section, its intimate associations, there’s no getting around being able to hear each song that’s mentioned. Most poems seem to be crafted around a reference to a Nirvana song, which lends its tone and its specific energy. Otherwise, in not immediately knowing the difference between “Endless, Nameless” and “All Apologies,” something would be lost (but it’s never too late to get into Nirvana):

cloud of haschich
cloistered in my bedroom
after an oath of racket
I improvise Endless, Nameless
forced to concede some weight

Compare to this repetitive structure:

The second section’s musical focus is on songs and artists we know Cobain to have loved, those we discovered because he mentioned them, or because they were associated with him. This section marks time in the same way as the first, but there’s a nice twist, which I won’t spoil here. These poems show to what point a life’s atmosphere is the same, no matter its outcome: “beyond disappointments / a placid constellation / where pariahs are sovereign” (au-delà des déceptions / une constellation placide / où les parias sont souverains, 36).

The same temporality as the first section, minus the references to specific months and years, reappears in the third section, which follows Cobain and Courtney Love’s daughter Frances Bean from birth to Cobain’s death. Rather than interrogating what it would have been like to live with Cobain, to be his daughter, Charette leaves the narration behind and explores what the symbols, the associations, the rituals, the social circles would be for a child who would simply take it for granted. I’ll pick a very obvious image for anyone who was into Nirvana when In Utero came out:

[...]
a guinea pig’s resignation
in spite of the inversions
undertaker’s panic
horror disgust sacrilege
the body is not a dump

The next section presents a similar attempt to imagine and describe a symbolic and affective disposition – that of Cobain’s last days. Our awareness of the coming tsunami shifts to its building, and Charette lets its advance slow down considerably as it gains height. The central element to which Charette returns, the trigger to Cobain’s fall, is the “treason / absolute treason / of being made into a monument / while living” (traîtrise / traîtrise absolue / d’être changé en monument / de son vivant, 69).

Where a true shift in voice takes place – perhaps where Charette feels or attempts no identification with his character – is in the second last section, where Courtney Love speaks both as a widow and in her now famous and unfortunate role as the accused in what remains a suicide.

“A blonde boy screams inside my lungs. The parasite enmeshes my system. Despite the discomfort, repulsion to dislodge it. Certainty of the damned: I am carrying my husband. Folly! Delirium! Solace.”

Charette gives voice to Love who was robbed twice of herself. In five prose poems with short stanzas, she protests as much as she sings incantations and casts spells. But this voice is not meant to be Love’s own voice, there is no search for her mannerisms, her speech, her idiosyncrasies – anymore than anywhere else in the collection. This section offers the poems that are most detached from reality, the most sublimated and abstracted from real-world content, the rawest and most violent, with the strongest images – the closest to the affective life of rage and loss.

I’ll keep the coda secret. Its mystery, its imagery, and its optimism, its distance as well, all contribute to highlight the effects of the passage of time on all the pain, the hurt, the loss and the being lost that the poems carry forward and splay out so well. Besides, I’m not done with the book yet. 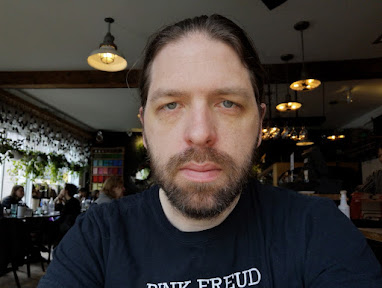 Jérôme Melançon writes and teaches and writes and lives in oskana kâ-asastêki / Regina, SK. His most recent poetry collection is En d’sous d’la langue (Prise de parole, 2021). He is also the author of a bilingual chapbook with above/ground press, Coup (2020), and of two books of poetry with Éditions des Plaines, De perdre tes pas (2011) and Quelques pas quelque part (2016), as well as one book of philosophy, La politique dans l’adversité (Metispresses, 2018) and a bunch of different attempts at figuring out human coexistence in journals and books nobody reads. He’s on Twitter and Instagram at @lethejerome and sometimes there’s poetry happening on the latter.