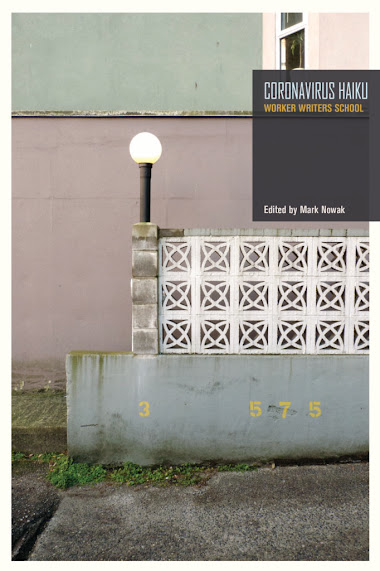 It relatively rare for a workshop group to make a trade collection (Ottawa’s Ruby Tuesday has one underway) but many poets have published Corona-19 poems. It may be the first Corona-19 haiku collections? How did it happen? The 19 page introduction to how this collection came into being is fascinating and has a good reading list of writers to explore.

This workshop group who met at PEN had been learning about haiku’s wider traditions for months. An enviable assortment of teachers and texts were presented to this workshop group of 13 essential workers. Barbara Smith of the Black feminist women’s cooperative Kitchen Table Press spoke to the group. Fred Moten and Stefano Harney, and Hiroshima Sato who focus radical tradition of haiku on sex, labour, irreverence and politics. They studied poets of Japanese internment, and Black Arts movement poets Sonia Sanchez and Amiri Baraka, as well as writings by Diane di Prima, Shiki, Evie Shockley, Langston Hughes. It is haiku that is gritty and real not preoccupied with season words and moods emulating and translating mainstream Japanese culture. They learned what is so small and immediate, that you can write in seconds, you can revise for years.

Then shutdown happened. Know te last thing they did as an in-person group when they learned of an outbreak of something called the “Coronavirus“? That night’s 10-minute exercise: coronavirus has 5 syllables and haiku sometimes has 5 syllables as first or last line.

As a focus on continuing on zoom the Workers Writers School explored haiku to the nth degree, discussing the form, the shutdown’s effect and their poems and making this project.

Some stuck syllabic form and others moved to the core idea of haiku as “3-line detonation of image and energy”.

Class is under the lens They speak what is immediate and pointed.

23% blacks in the workplace

Need to sur for advancement

Bias alert #2: Because I have been schooled against syllabic interpretations of haiku and toward haiku that are ideally closer to 9 syllables with a sonnet-like pivot and an arm-length list of constraints (concrete words, no gerunds, sparing or no adjectives, suspense in line breaks, no first person pronouns, a core emotion, with surprise or insight, no sentences, not one idea but juxtaposing two, use a season word that it not the season’s name, no capitalization, numbers written out in letters, no explicit metaphors or similes nor rythme, no personification,  “universal” “standard” language and spelling, no judgement, no self, a sense of empty space within the poem, an allusion to other poems, no naming feelings only describing as a fictive neutral objective self, and etc ad infinitum). What doesn’t make the bar get relegated to lyric shorts or keep working until it is a tanka. Are we policing a form, a craft, tone or a class?

under house arrest because

It is hard to prop open the brain to see a different path of haiku.  To do so is healthy.

This anthology is haiku taken as a direct experience, witnessing, social conscience, as immediacy of living. It comes from the 1960s Black Civil Rights, anti-nuclear anti-corporate fight for human dignity and respect. As such it is refreshing. For example,

Afraid to go out

Cannot let anyone know me

Waiting late night for an Uber

Much of what published poetry shows is not proportional or inclusive of population. Even self-declared working class born often have a BA and MA, or end up as retirees of middle and upper class. That risks confirmation bias of how the world is.

These are poems by local New Yorkers, born there or immigrants, but working people: a cashier, taxi drivers, a daycare worker, a nanny, housekeeper, an spoken word artist and actor, a street food vender.  Their vision, their attention is what marks the poems. These are not moping over birds and moon, like so many haiku that give that genre its cliché.

hot days beg for you

Made 4 bucks an hour

Will eat ‘til I’m sick

One participant sent 200 poems to consider. One person got Corona and recovered. Many reference street life and the threat which is the police and white people.

when will you apologize

What a difference a day makes

Someone sang that song

One of the paths of haiku is seeing what is, telling what is in this moment:

It leaves the implication and interpretation to the reader, as satisfying poetry often does.

Most of these poems are urban haiku (which is an existing sub-genre) and many are unafraid to be funny or hopeful. Some are gritty but not poverty tourism as they are reporting their daily, which can have food insecurity, job insecurity, police and gun violence. These peots observe concretely, you might say.

I am reminded seeds sprout

from cracks in concrete 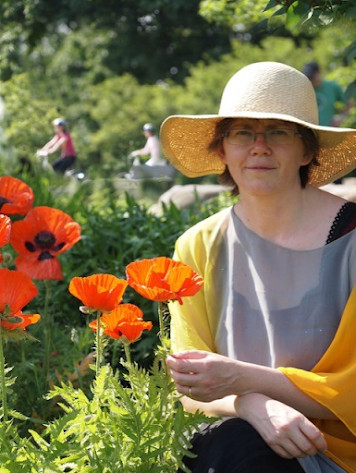