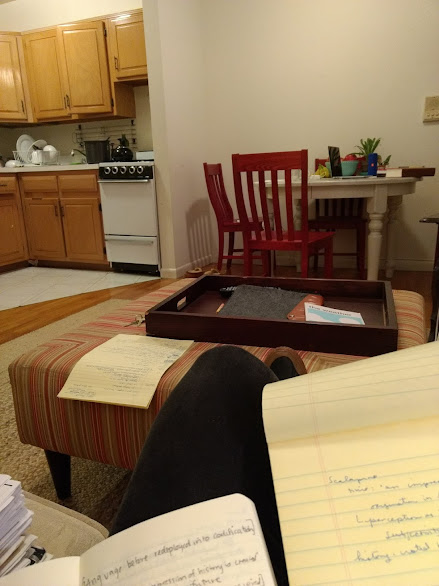 Study is, in many ways, already an essay about its own making. The pieces in it are at least partially demonstrations of a failure to write a more straightforward analytical essay (they are also, then, partially a demonstration of what else emerges in the process of this so-called failure). The project started around the time I was starting a PhD in the Poetics program at SUNY – Buffalo and reengaging with critical writing again. Sometimes I refused, often out of general exhaustion from what intense study and analytical writing required rather than an explicit desire to not comply with generic expectations.

The second essay in the book was actually the first I wrote. I had been trying to write a more direct critical evaluation of Lisa Robertson’s work in Nilling and The Weather, but the quality of these materials, with their gorgeous description, their evasion of codifying meaning into something stable and graspable, evading thus the loss of what in experience and thought is not possible to make cohere, made this essay, with its thinking-through-description rather than through concept, feel more possible, more appropriate. It allowed my thinking about the work to stay open rather than requiring it to close in on some conclusion. My exhaustion, too, was operative in this form. I acknowledge John Keat’s statement “axioms in philosophy are not axioms until they are proved upon our pulses” and in a way this essay is that proof which the constraints on my time and energy required me to do in place of the analytical essay I had been trying to write, as there wasn’t time for me to do it outside of the essay.

I was at the time reading Eve Kosofsky Sedgwick on reparative reading – which I’ll roughly define as how to write intelligibly about a text without your reading foreclosing the text’s available significations in an overly rigid critical framework. Most theorization on reparative reading is about how to act as a critic. My orientation in these essays shifts this focus slightly – these are critical essays that aim to comment on others’ texts, but they are also personal essays that aim to use these texts as a material and structuring component of my own experience. They are attempts to count reading as experience, to account for thought and its sources as part of a life. These pieces moved my critical thought closer to my creative practice and made way for incorporating criticality, material or ideas that originated outside my own first-hand experience, in its interaction with other facets of experience. Working with the material in this way gave me time to work alongside the texts rather than on them, giving me time to get to know them. I’m now working on much more straightforward critical writing as I draft a dissertation chapter on Robertson, but it’s writing that’s been formed by this experience of being with the text.

The first essay in Study engages in a similar project to the second, but one that is more closely tied to the language of the text being studied, that is, a Leslie Scalapino essay in which Gertrude Stein is also quoted. Rather than analyzing the language, I wanted to describe it, to use it to describe my experience that existed alongside the language, preserving it intact. The final essay interrogates more directly what thinking feels like. While the first two essay may have been demonstrations of a kind of thinking, this third essay attempts to take its measure as accurately as possible. I’m influenced by Mei-mei Berssenbrugge’s acts of precise description of phenomenon we often allow to proceed invisibly. I discovered in the act of writing that my topic, the sublime, which I’ll describe as the feeling of overwhelming awe or fear when faced with something too large or powerful to fully integrate, actually included for me the process of writing itself, especially the kind of creative synthesis required by good critical writing.

Buffalo, its weather and history, is also an important material read for this project by my daily experience of living here. So too its long, early winter nights -- this is a book of the November time change and December solstice night. 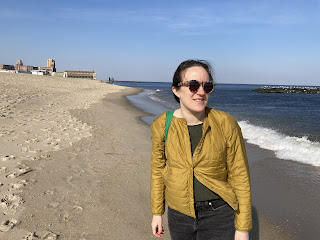 Katie Naughton is the author of the chapbook Study (above/ground press, 2021). Her poetry has been published or is forthcoming in Bennington Review, Michigan Quarterly Review, Jubilat, Tagvverk, and elsewhere. She is at work on two collections of poems, “Debt Ritual” and “the real ethereal,” which was a finalist for the 2021 Nightboat Poetry Prize and Autumn House Press Book Prize. She is the publicity editor for Essay Press, editor and project manager at the HOW(ever) and How2 Digital Archive Project (launching in 2022), and founder of Etcetera, a web journal of reading recommendations from poets (www.etceterapoetry.com). She lives in Buffalo, NY, where she is a doctoral candidate in the Poetics program at SUNY – Buffalo.