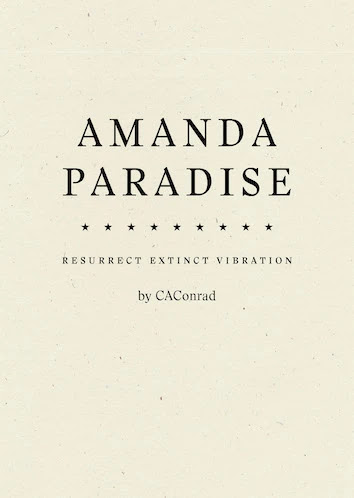 I’ve not always known how to articulate my thoughts on the work of American poet CAConrad, who feels consistently working on a level far above what I am able to possibly conceive, and through multiple titles going back at least fifteen years, including Deviant Propulsion (Soft Skull Press, 2006), (Soma)tic Midge (FAUX Press, 2008), The Book of Frank (Chax Press, 2009), The City Real & Imagined (with Frank Sherlock; Factory School Press, 2010), A Beautiful Marsupial Afternoon: New (Soma)tics (Wave Books, 2012), Philip Seymour Hoffman (were you high when you said this?) (Worms Press, 2014), ECODEVIANCE: (Soma)tics for the Future Wilderness (Wave Books, 2014), While Standing in Line for Death (Wave Books, 2017) and JUPITER ALIGNMENT: (Soma)tic Poetry Rituals (Ignota Books, 2020), as well as a book of nonfiction essays, Advanced Elvis Course (Soft Skull Press, 2009). Their latest title is Amanda Paradise: Resurrect Extinct Vibration (Wave Books, 2021), a remarkable assemblage of lyric attention comprised of a suite of one hundred or so self-contained poem-shapes. The collection opens with more than two dozen single-page poems before launching into “72 CORONA TRANSMUTATIONS,” structured as a seventy-two poem-shape sequence, each of which are set at the bottom of each page, and closing the collection with the lyric essay, “RESURRECT EXCINT VIBRATION: A (Soma)tic Poetry Ritual.” As they write to open their nine-part afterword:

Amanda Paradise is the author of this book, and by CAConrad is its title. I did not mention this earlier because I did not want to interrupt your conversation with the poems. A (Soma)tic poetry ritual I did a few years previously to overcome my depression after my boyfriend Earth’s rape and murder led me to “Resurrect.” I was sitting on a forest floor in New Hampshire when I realized that this man I loved, who had changed his name to Earth, died from the very same wounds humans inflict on the planet: he was bound and gagged, beaten, tortured, raped, then covered in fossil fuels and set on fire. This connection brought a flood of grief. After my tears subsided, I lay flat on the fallen leaves, feeling my breath sync with the soil beneath me and with the wind, birds, insects—and as suddenly as I had burst into tears came a lavish shower of peace. It was extraordinary, instantly feeling these connections in my body. These sensations guided me to the “Resurrect.”

There is such a meditative and thoughtful quality to the poems in this collection, writing the world and around the world in a deeply personal eco-poetic that is fully aware that ours might be a culture and planet that is irrevocably broken. “I am so fucking sick of nations,” CAConrad writes, to open the poem “ONLY IN STACKING BOOKS CAN THE TREE FEEL ITS WEIGHT AGAIN,” “and the men who love them / the number of suicides / this afternoon hiding / in the bottom of a cup / I feel feral out here / found a man who likes me like that / found a man who lives the way I do / 7 years on the road anniversary soon / you only have to destroy [.]” The poems are unflinching, sad and occasionally angry; poems that would rather be celebrating joy, hope and love, but can’t turn away from inequalitites, citing American imperialism, homophobia, male aggression and micro-aggressions. “I have nothing but exclamation points / for this world some days,” they write, as part of “!! !,” “one for shock / one for disgust [.]” Or the poem “45 MINUTES TO RESCUE THE PHOTO ALBUM BEFORE THE GARBAGE TRUCK ARRIVES,” that includes: “tell the children when US poets pay / their taes homes of poets in the / Middle East burn to the ground [.]”

Amanda Paradise is a poem-suite that writes on death and history, old boyfriends and politics, the death of friends and lovers during the AIDS crisis, singing, ritual, vibrations, extinction, heartbeats, social distancing, reading Eileen Myles and gay rights. “everything matters because everything / hurts someone somewhere as it is mattering,” they write, as part of the poem “CAMISADO.” Or as one of the poems from the sequence “72 CORONA TRANSMUTATIONS” writes:

In a 2019 interview for TANK Magazine, Josie Mitchell describes CAConrad’s “series of visceral, messy, erotic bodily practices called (soma)tic poetry rituals – activities designed to help people find their bodies, escape their routines and default modes, and instead live and write poetry in the ‘extreme present’ with ecological sensitivity and reverence for nature.” Ritual has long been important to CAConrad’s work, comparable to the attentions of Perth, Ontario poet Phil Hall; displayed in their works through the attentive gesture of a highly deliberate lyric. Even just to look through CAConrad’s book titles is to see the “(Soma)tic ritual” as a thread that runs through their work, offering up the ritual as a way to connect to the world and respond as part of that connection. As part of the interview itself, CAConrad responds:

I have been working on an extensive (soma)tic poetry ritual that I call Resurrect Extinct Vibration. One of the ingredients of this ritual is that I lie on the ground and flood my body with recordings of recently extinct animals. In my lifetime, our planet has lost 60% of its wild creatures. When a species leaves the earth it takes all of its sounds with it: heartbeat, breath, footfall, gallop, wing flutter, purring, singing, crying, laughing, chewing, all of it gone forever. Humans are changing the sonic landscape, and the loss of our organic, wild vibration is part of that change. Another, newer ingredient to this ritual is to spend time in the vast abandoned, bankrupted shopping malls and other megastructures across America. My Instagram account is devoted to photos of weeds breaking through cement. This world is worth fighting for! We are not going to be able to reverse things to bring back the many plants, insects, birds, fish, mammals and other creatures that have become extinct in our lifetime, but we most certainly can stop or slow the haemorrhaging of our planet’s vitality. But to get everyone seeing what change is possible, we have to get everyone being creative in our lives. Only creative minds can imagine and then build that possible future we will need to survive. My job is not just to create, but to show others their abilities. In workshops, I always start by saying, “If our creativity is an organ, we must begin thinking of it as a vital one.” I understand the paralysis that trauma and depression can bring to our lives, and I also know my rituals stand on the shoulders of centuries of poets who smashed open barriers of language and insisted on saner, caring systems of government. I think of Charlotte Delbo surviving Auschwitz and in her poems reminding us: “And finally it would be too stupid for so many to have died and for you to live and do nothing with your life.” Of Dennis Brutus dreaming his poem about Sharpeville in the cell next to Nelson Mandela’s, and of Janet Frame narrowly escaping a scheduled lobotomy in the mental institution because she won an award for her writing. Just imagine what they would have done to her mind and her writing if she had not won that award! There are so many poets to thank, where to begin?

There are elements of Amanda Paradise that seem to connect back to The Book of Frank (2009), the first CAConrad title to catch my notice, for their shared book-length attention to grief, ritual and impossible loss. And it is impossible to really showcase the gesture and shape of these poems without displaying them in full, composing a lyric formed into visual shapes, reminiscent to elements of Guillaume Apollinaire or bpNichol. Despite the strains of grief and loss thread through these poems, the shapes and gestures of Amanda Paradise display a high level of formal inventiveness, play and even joyfulness. Honestly, there is such a sense of joyous celebration and of acknowledging the small moments and gestures (again, similar to Phil Hall in that way) that CAConrad appears to refuse to let go, despite whatever else might occur. And in the end, perhaps this might be the very key to our ongoing emotional health, if not even our continued survival. As the opening poem of “72 CORONA TRANSMUTATIONS” reads: 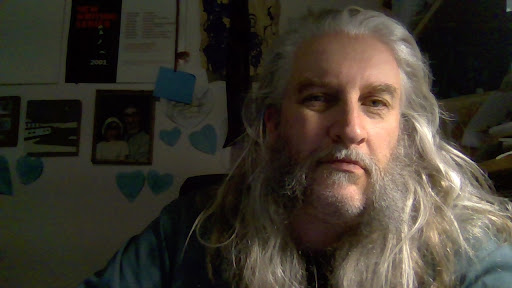 Born in Ottawa, Canada’s glorious capital city, rob mclennan currently lives in Ottawa, where he is home full-time with the two wee girls he shares with Christine McNair. The author of more than thirty trade books of poetry, fiction and non-fiction, his most recent poetry title, the book of smaller (University of Calgary Press, 2022), is now available for pre-order.