Rosmarie Waldrop : A COMPLICATION OF GRAVITY

My book is the fall of a body, you said. Yours, fragile, premeditated. Into the depth of the page, where mysteries might still speak. And time passes with infinite resources of slowness and is its own project of  erasure.

Arrived none too late, you wrote, scar-tissued darkness, form as opposed to character, point, knife, displace the menace.

Headlong your rush, thoughts, desires in violent agitation, a heatwave. Then grounded, the flying carpet, prey to grammatical elements, fire sustained by adverbs and conjunctions. Intensity within the darkest howl of pain. Your horizontal position did not project nocturnal ease onto the day.

Can't without sensuality, you wrote, pedigree of thirst, desire of words for one another, vertigo, speed of chance, pure pulse free of cause.

Time has fallen into the hands of mathematicians, and clocks pretend to be synchronized. Hence your words in geometries across the gravitational fields and spilled metaphor. To give birth to an order of a different kind. Where even fallen among the nakedness of letters you might remain a subject. With clothes marking the boundaries of body by surrounding it and stimulating respiration.

Those women, you wrote, the lyricism of precision, dazzled by data, the wrist, upwrench, the splendor of syntax, complicit to the point of injury, they will come no more.

Though you opened all your senses to encounter you could not decipher the vast hostility of the real. In the mirror large eyes, but not yourself. You fled, hoping for ecstasy and full harmony with death. Then hesitated on the threshold to gauge the distance from body to text. This mystery, never fully resolved, has devoured you.

Uncertain dream, you wrote, the body as text, irrepoachable absence, the scent of the rose, invisible from lack of self, song blazing incantescence, hair swept into the night. 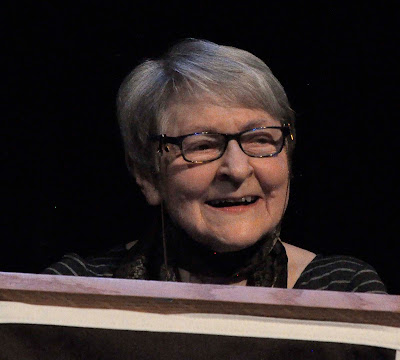 Rosmarie Waldrop’s most recent books are Gap Gardening: Selected Poems, Driven to Abstraction, and Curves to the Apple (New Directions). Her collected essays, Dissonance (if youare interested), is available from University of Alabama Press. Her novel, The Hanky of Pippin's Daughter, has been reissued by Dorothy a Publishing Project. She has translated from the French 14 volumes of Edmond Jabès’s work (see her memoir, Lavish Absence: Recalling and Rereading Edmond Jabès, Wesleyan UP) as well as volumes by Emmanuel Hocquard, Jacques Roubaud, and, from the German, Friederike Mayröcker, Elke Erb, Gerhard Rühm, Ulf Stolterfoht, Peter Waterhouse.

She lives in Providence, RI where, with Keith Waldrop, she edited Burning Deck Press.