that run parallel     to George Oppen’s     without converging

the soup kitchen     of the alphabet

chipboard    basement window     flag curtain     as if through grass

real people     are abducted     or banished

this other parade     keeps gathering in     nape & bateau
not passing by

it welcomes & carries     all those who go largely unsung

Jamie Reid—Prez: Homage to Lester Young (Oolichan, 1994)
I. Another. The Space Between: Selected Poems (Talonbooks, 2004)
A Temporary Stranger: Homages, Poems and Recollections (Anvil, 2017) 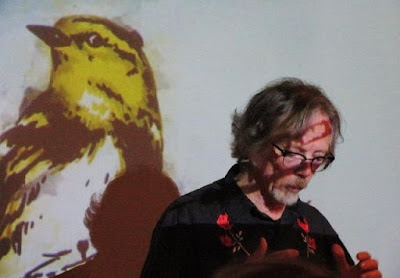 Phil Hall is the author of many books and chapbooks. In 2015, his award winning book of essay-poems, Killdeer, was translated into French by the Acadian poet Rose Després, and published as Le pluvier kildir by Éditions Prise de parole. Forthcoming from Beautiful Outlaw Press: Toward A Blacker Ardour (2020), and from Pedlar Press: Niagara & Government (2020). He lives near Perth, Ontario.