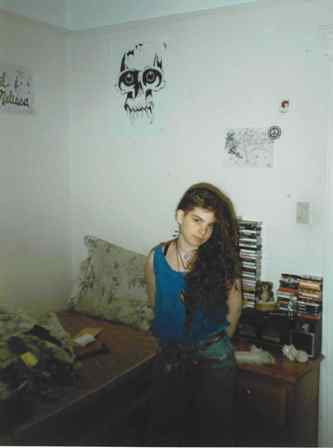 How do you begin to map a trajectory that feels as if in constant motion or flux, zigging and zagging, jumping, stalling? There are jagged lines and furious scribbling and ellipses, lots of ellipses, & dashes and many, too many parentheses. I begin to notice moments one might otherwise overlook, take stock of them, begin to see them align and curl over each other, pivot and dart away when I look too closely.

There was quiet. After school one day in the 9th grade, I entered our apartment to find my mom in the kitchen reading my diary. I felt the color drain from my face as I stood there, horrified. “You’re reading my diary?” She explained that she was worried about me and didn’t know what else to do. I cried & yelled & vowed not to write another word.

When I was 17, I awakened in the middle of the night to my mother talking on the phone & crying.
The crying & talking on the phone was familiar - I come from a long line of dramatic Italians- but the timing was unsettling. My mother left to bring my youngest brother to the hospital, & there I sat in the dark, bereft & afraid. I reached for my notebook & began to write again. It was during this time that I rededicated myself to a writing life.
Writing was a way out. A long longed-for catharsis. I wrote often & furiously in a series of marble notebooks for years, never sharing a word for fear the bubble might pop.
At 19, I was living on my own, working full-time & attending college full-time. That first year, I got fired three times from a string of office jobs for lateness, due in part to my predilection for writing poetry until 2am. Eventually, I took a receptionist position for a large publishing company where my main responsibilities were to buzz people into the office and answer the phone. While there, I made lifelong friends with the fine art of office job subsidies. I’d practice transcribing words and their definitions to aid memory, and began to compile them in notebooks. In time, this process would lead to an ongoing project I refer to as my autobiographical dictionary. I continue to refer to these notebooks as source material for writing poems and projects. In fact, a few found poems derived from this process would later find themselves in the final manuscript of field guide to autobiography.

After graduation, I saved up some money & backpacked around Europe for a month, sleeping on beaches and in hostels, arriving in new towns with no plan but to find a place to stay & food to eat.
Hiking the mountains of Cinque Terre was a pivotal experience in that I connected with my own resiliency, and by the time I returned to New York I began to submit my poems, mostly to small online journals.

After about six months of following a daily routine of writing and revising my poems, researching journals and submitting poems, I had my first poem accepted at an online journal, & a few months later - a second poem accepted at another. This felt very rewarding to someone who had resigned herself to a romanticized post-mortem fame.

Despite these brief interludes with a sense of myself as a poet, I grew more and more dissatisfied with living in Brooklyn, saved money, and traveled to California to explore another peripatetic whim. While stranded at a Greyhound rest stop somewhere in middle California, August 2001 - I decided to move to San Francisco.

It was also at this point that I first met Diane Di Prima. During my film school days, I had read Brenda Knight’s feminal anthology of women Beat writers, Women of the Beat Generation, and had been brazen enough to contact Brenda and several of the poets including Diane, Hettie Jones, & Joyce Johnson about a film I was interested in making about women Beats. Sadly, the project never came to fruition, but I felt encouraged by these amazing, fierce women writers as new paradigms of possibility for the future.
Spurred on by this idea of the possible, I attended a reading Diane gave at a bookstore in Glen Park called Bird & Beckett. Afterward, I worked up the courage to approach Diane and introduce myself. We got to talking & she invited me to apply to Foundations of Poetics, her small, private workshop for beginning writers.

At this point, I had accumulated a lot of poems & decided to start making chapbooks of my work to distribute at readings. I chose 10 or so poems, & arranged them into my first self-published chapbook - grins and growls. I found the exercise so rewarding that I went on to self-publish two more chapbooks that same year (2004): belly and bone, and the winter i was worn.  While I was no closer to making rent from chapbook sales then when I started, it felt great to be attentive to the poems, & feel a sense of agency in doing so.

Also that same year, I worked as a student-teacher at Balboa High, through Poetry for the People. Originally created by the legendary June Jordan for UC Berkeley, the program in its current iteration is led by Lauren Muller at CCSF. P4P opened me up to the sense of urgency in poetry, and helped me expand my awareness of many poets from diverse multicultural backgrounds. Working with students at Balboa High felt like a gift. While it was initially challenging to gain the students’ trust, by the end of the semester I realized the gentle beauty inherent in teaching - I had learned so much from these amazing students. I decided to make my writing a priority, and applied to the MFA program at Mills College.

While at Mills, I began to immerse myself in the craft of poetry – its composition and structure. I also began to write poetry through a less-personal lens, and began to explore ways to remove myself & my emotions from the poem, so as to examine the world around me more scientifically, or “objectively.” I lost the I, and in many ways was trying to create a new I from all these new experiences. As a high-school dropout & a first-generation college graduate from a socioeconomically disadvantaged background, I was also coming to terms with class privilege, and figuring out my place among so much affluence.

On the night of February 24, 2007, during my final semester at Mills, I began writing visual poems about identity and genesis which were later included in my graduate thesis, went to sleep around 2 am, & woke up four hours later to the sound of water gushing. I was in active labor. My son, Phoenix was born a few days later, six weeks early & ready to greet the world.

Taking care of a preemie immediately became my sole priority, but I worried I wouldn’t graduate on time. Thankfully - there was just the pesky matter of finishing my thesis. I learned how to write while also nursing Phoenix, him in the crook of my arm, paper placed on a pillow above his head.

One trick that has helped me sustain a somewhat consistent writing practice over the years are engaging in projects with other writers. When my son was a toddler, I began participating in postcard poem swaps, where poets mail poems written on postcards to other poets. This form really appealed to me as a mom on the go, and is versatile enough to accommodate many writing styles. Another project I participate in is (NAPOWRIMO) or National Poetry Writing Month, where I try to write at least one poem every day during the month of April.

Participating in NaPoWriMo in April 2014 allowed me to carve out a space to write many of the poems that would later wind up in my first full-length collection, field guide to autobiography.

That month, I had written enough that I could began to see a series emerge and possibly a book. With field guide, once I started seeing where things were going, I began to see connections forming between and among the different genera I was reading about in the various field guides I consulted as source texts. I noticed where the characteristics began to coalesce and formed a semblance of self. That was one of the initial writing processes for the book. I like to let the work tell me where it is going, and try to really tune in and absorb what the poem is about and what it’s becoming.

I still didn’t feel like I had a full-length book, but during this time, I had been entering a few manuscript contests to see what might happen and keep myself in that process, staying in that cycle. Finally, the book was accepted for publication in June of 2016.

This book has been a labor of love, & has changed and evolved in many ways since I first began writing poems toward it 5 years ago. In many ways, the book truly began as part of my MFA thesis, from granite to the oyster, back in 2006. I had submitted the manuscript for the greater part of a year in its current iteration, & it had previously been rejected 15 times.

How does a person begin to distill the many fragments & fractals that comprise a life? Sometimes we must collage our fractures & let go.

This essay was originally written & recited for the “Pathways to Publishing panel” at the Mendocino Coast Writers Conference in 2017. 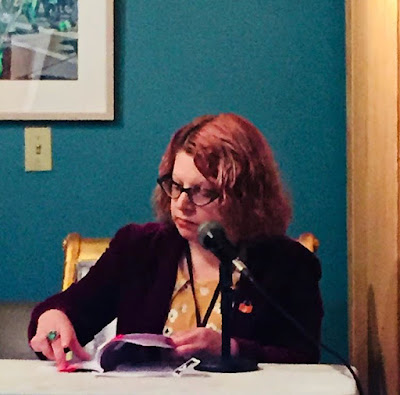 Melissa Eleftherion is a writer, a librarian, and a visual artist. She is the author of field guide to autobiography (The Operating System, 2018), & nine chapbooks, including little ditch (above/ground press, 2018) & trauma suture (above/ground press, 2020). Born & raised in Brooklyn, Melissa created, developed, and currently co-curates The Poetry Center Chapbook Exchange with Elise Ficarra. She now lives in Northern California where she manages the Ukiah Library, teaches creative writing, & curates the LOBA Reading Series. Recent work is available at www.apoetlibrarian.wordpress.com.