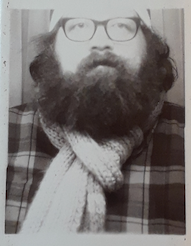 Interview #2: Nate Logan is the author of Inside the Golden Days of Missing You (Magic Helicopter Press, 2019). He was the founder and editor of Spooky Girlfriend Press from 2008-2019. He teaches at Marian University.

How did you get started in writing?

Like many kids, I started experimenting in junior high. I remember trying to impress a crush by using part of Goo Goo Dolls’s “Iris” in a poem. It was not impressive. Earlier, I’d written longhand (in pencil!) a story about buried gold at a ski resort for a writing contest. I don’t remember if the contest was classwide or gradewide. I got second place.

Why poetry instead of some other form?

One of the wonderful things about poetry is that there are no rules (though curmudgeons seem to always want to make them). Maybe it’s more accurate to say that while some forms of poetry have “rules,” they can be bent however the poet likes and still “count.” Fiction, non-fiction, and screenwriting traditionally have a lot more restrictions on the page. I’m not so much interested in plot as I am in mood, the meat and potatoes of poetry. I give all the kudos to memoirists, novelists, etc.

What other form do you see your work influenced by or continuous with? Music? Magic? Science? Jouralism? Gardening?

A handful of poems in my book (and its title) borrow from the band Silver Jews. I almost always listen to music when I write, so there are mulitple overlapping conversations there, though I wouldn’t say my poems are musical. If anything, I’d say my poems are more continuous with painting or photography. I’m drawn to the image that appears banal, only to reveal something off in the details. Subtlety is a magic trick I try to repeat. The only time I like getting hit in the head with a frying pan is when I listen to punk.

What infinitives best sum up your writing practice? To explore, to investigate, to express, to interrogate, to perform, to reveal, to layer, to obfuscate, to connect? Please choose as many as you wish and explain.

At this point, I’m not entirely sure I know what my practice is or that it would be helpful to find out. Please don’t misunderstand, I don’t say this trying to be a smartass. Any intentions I bring don’t amount to a hill of beans because it’s the reader who matters. If something in a poem catches a reader’s eye, heart, or brain, I’m happy. I think that’s what most poets really hope above all else.

What ecosystems do you see your work fitting into? That is, who are the other artists and makers and writers that your work is in relationship with?

If my work was a category on Jeopardy! I think the answer would be, “Who are the Neo-Surrealists?” ($200). Poets who generally write in free verse, while having elements of a-ha humor (lines that make the reader stop and think and/or nervous, described as funny) would fall under this category. I’ll spare including my MFA thesis here, but in short, the Surrealist label is inaccurate at best and misued at worse. My poems live in the same apartment complex as those by Michael Earl Craig, Mark Leidner, and Zachary Schomburg, among others.

What are your current projects? What are you working on? If you’re not writing, are you busy with something else?

Currently, I’m writing toward the second book. I’m imagining it as a collection of prose poems à la Heather Christle’s The Trees The Trees. I’ve been writing these for the last six months or so. Do you know what Mary Ruefle says about the prose poem? “A three-hour class on what is a prose poem is? A waste of time.” 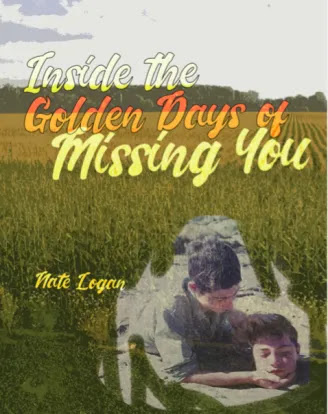 What stuff do you have out in the world, and how can people get their hands on it? Books, chapbooks, individual poems, essays, other interviews, songs, anything else?

My first book, Inside the Golden Days of Missing You, was published last year by Magic Helicopter Press. I’ve got two chapbooks from presses in the Badger Castle: a chapbook of sonnets co-written with JJ Rowan (mcmxciv.) from Shirt Pocket Press and Small Town, forthcoming this fall from The Magnificent Field. These presses have their own websites and there are links to everything on my website: nateglogan.tumblr.com.

What would you tell people who are just starting to get involved with writing and publishing?

I wholeheartedly recommend Dean Young’s The Art of Recklessness for anyone dipping their toes in the writing water. Here’s a cheatsheet: It begins, “Let us suppose that everyone in the world wakes up today and tries to write a poem. It is impossible to know what will happen next but cerainly we may be assured that the world will not be made worse.” And shortly after: “No one knows how to write a poem. Congratulations!”

Read the living poets, reach out to your community of writers—those are some of the best things a writer, new or old, can do.

What media are you enjoying lately? Music, tv, movies, art?

The New Pope is one of the most beatutifully shot series on television. The new season of Curb Your Enthusiasm is so sharp I’m often in stitches while watching. Something not on HBO…I always look forward to the next Smudge meme. 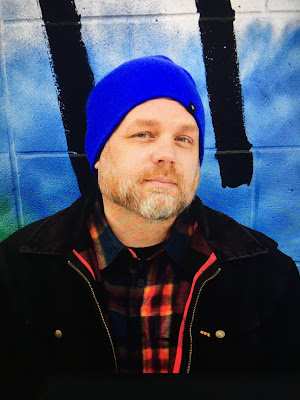 Michael Sikkema is a poet, visual poet, and aspiring drummer. He has a book out recently from Trembling Pillow Press, called You've Got a Pretty Hellmouth, and also has chapbooks out recently from above/ground press, and Where is the River Press, titled Heron on Huron, and Welcome to the Last Earth Show, respectively. He enjoys correspondence at michael.sikkema@gmail.com.