At home, I've raised a very small horse.  He gallops about my room.  It's my distraction.

To begin with, I had some worries.  I wondered if he would grow up.  But my patience has paid off.  His height is now more than 53 centimetres and he eats and digests the food of an adult.

The real problem was with Helen.  Women are complicated.  A bit of manure discomfits them.  It puts them off balance, and they don't feel like themselves.

"Such a small rear end'" I told her, "couldn't produce very much manure," but she...  Well, so what, now she's out of the picture.

What worries me is something else: suddenly some days there are changes in my little horse.  Within less than an hour, his head inflates, his back curves in and buckles, and he flaps in the breeze that comes in the window.

I wonder if he isn't tricking me, in representing himself as a horse.  Even when small, a horse doesn't rise up like a tent, or flap in the breeze, even if only for a few seconds at a time.

I wouldn't want to have been duped, after having taken care of him for so long. nights spent watching over him, protecting him from rats, the dangers always nearby, and the fevers of youth.

Sometimes he is upset to be so small.  It troubles him.  Or in rut, he makes great bounds over the chairs, and starts to whinny, to whinny hopelessly.

The female animals in the vicinity prick up their ears, the bitches, the hens, the mares, the mice.  But that's all.  "No," they decide, each one for herself, according to her instincts, "No, it's not for me to answer."  And so far, no female has answered.

My little horse looks at me with distress, with anger in his eyes.

Formerly so lively, now a deserted village.  A man under an awning was waiting for the rain to stop.  It had been well below freezing for months and there were no signs of rain.

A farmer was looking for his horse among the eggs.  It had just been stolen from him.  It was market day.  There were innumerable eggs in innumerable baskets.  The thief had certainly considered this as a way to discourage pursuit.

In a room in a white house, a man was pulling a woman towards the bed.

"You can't be my father," he answered, "since you're a woman.  And besides, a man can't have two fathers."

He left the house, defeated.  A man in a suit crossed his path and said, "Today, there are no more queens.  It's useless to claim otherwise, there are no more." And he went on his way, making threatening gestures.

They want to steal my name

As I was shaving this morning, stretching out and lifting my lips a little to have a tauter surface, affording a good resistance to the razor, what do I see?  Three gold teeth!  I, who have never been to the dentist!

But I am also ready, and I hang onto it.  "Barnabas," "Barnabas," I say, softly but firmly, and on their side, all their efforts are reduced to nothing.

The car of the Avenue de l'Opéra

It is a mistake to think, if you live on the Avenue de l'Opéra, that numerous cars pass by, a mistake which in fact you don't commit.  It is always the same car that passes, the same one whose clutch is let out, that accelerates, that honks, that goes by in second gear, that stops sharply, that goes out into rue d'Antin, that comes back by rue Ventadour.  It's because of this car that all of us in the city are descending into neurasthenia.  It's uncertain, has not yet gone by, has already come back, it brakes in a sidestreet, it drives off at speed, and already it is the "next" one seeking the same labyrinth.  Imperious and monotonous, this is the one we were really missing.

When Louis XIV arrived somewhere, he liked to make a dramatic announcement of his presence.  But he never heard of such a device for making noise.  The idea was absent.  In his time, the most snobbish person (and God knows there were plenty of snobs) couldn't have proposed a car to him.

Fundamentally I am an athlete, an athlete in bed.  Don't misunderstand me--I've hardly shut my eyes and I go into action.  The thing I can do like nobody else is diving.  I don't remember ever having seen, even in movies, a plumb-line dive like mine.  At that moment, everything in me is perfectly rigid.

And the others, if there are competitors, don't even exist beside me.  Also it's with a smile that I attend (when it occasionally happens) sporting events.  The small faults everywhere in the execution, which do not strike the vulgar, immediately attract the attention of the virtuoso.  It's not that kind of Phelps who is going to beat me.  They don't attain real correctness.

It's difficult to explain the perfection of my movements.  For me, they are so natural.  The tricks of the trade would do me no good, since I have never learned to dive or even to swim.  I dive the way my blood flows in my veins.  Oh, slipping into the water, that admirable slipping.  One hesitates to resurface.  Who among you will understand that it's possible to move about in the water as if at home? The real swimmers no longer know that water is wet.  The horizons of solid ground stupefy them.  They constantly return to the bottom. 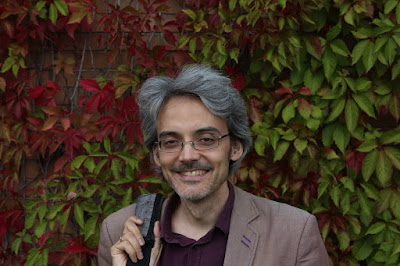 Hugh Thomas lives in Montréal, where he teaches mathematics at UQAM. His first solo book, Maze, was published in 2019 by Invisible Publishing.