Just before the entire Sydney poetry scene was postponed because of the strealthy corona- virus-19, Astrid Lorange managed to scrape in on this leap year's Saturday afternoon with a book launch under the gum trees at the community space 'Frontyard' in Marrickville.

There were readings from Andrew Brooks and Emily Stewart and a short encomium from Tom Melick before Astrid read the brilliant title poem that documents and analyses the work of giving birth as labour. It's a beautiful and cogent poetic synthesis of the continually examined work /labour difference. Justin Clemens says '...every poem here requests an attentiveness to the relations of our lives, to the entwining of senses and references.'  Astrid Lorange tells us that 'This book is about relations and their ambiguous intimacies. The three poems approach the question of how to endure, survive, destroy or protect the relationships that both constrain and make life possible.'

Labour and Other Poems is published by the new-wave press Cordite Books in Melbourne.

At the launch Emily Stewart read a long montage poem that she described as being made from an imagined experience of entering a room full of people all talking at once. After publishing a chapbook, Like, with Bulky News Press in 2015, Emily's debut collection of poetry Knocks was published by Vagabond Press in 2016.
Frontyard in Marrickville is in the land area traditionally belonging to the Gadigal& Wangal peoples of the Eora nation.

Both Andrew Brooks and Astrid Lorange have contributed to many seminars on poetry, politics and art. Some of their ideas can be found on Western Sydney University's website 'Poetry & Poetics'  here.

Tom Melick is a writer, editor and teacher. He co-edits the pamphlet series Slug and is a member of the publishing collective Camanchaca. You can read his review of Lyall Watson's A Natural History of the Wind here.

Slug pamphlets can be found here.

Other poetry events that have been cancelled or postponed in Sydney are the monthly reading series co-ordinated by poet and editor of Overland magazine Toby Fitch at Sappho's Books in Glebe and  the launches of new books The Jewelled Shillelagh by Duncan Hose, A Happening in Hades by S.K. Kelen and Michael Farrell's Family Trees.

This is such a weird time everywhere. Sydneysiders have been asked by our three levels of government (yes - three! which equals three levels of taxes!) to stay home to assist in reducing contagion. It's hard. As much as I might think I'll use this period to read more, to write, to think, to make collages, practise guitar, I find that I'm more distracted than ever by basefook, twitter & email and increasingly unproductive days slowly roll on by. I was pleased to be asked by rob mclennan to make a few notes on what's happening here - it kept me at the keyboard feeling a bit more communicative & mildly concentrated for just over an hour. Thanks rob. Up ahead, from the beginning of May I'll be reading through and choosing poems for publication as a guest editor of Chris Holdaway's min-a-rets magazine in Auckland, Aotearoa/New Zealand - so, for me, I'm happy to say there is a future. 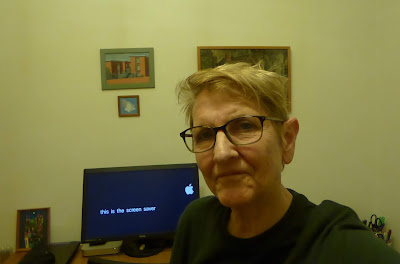 Pam Brown, a dedicated amateur, has published many books - most recently click here for what we do (Vagabond Press, 2018). She has edited for Jacket, Overland, Cordite, and other magazines. Pam is a Sydneysider living on Gadigal land.