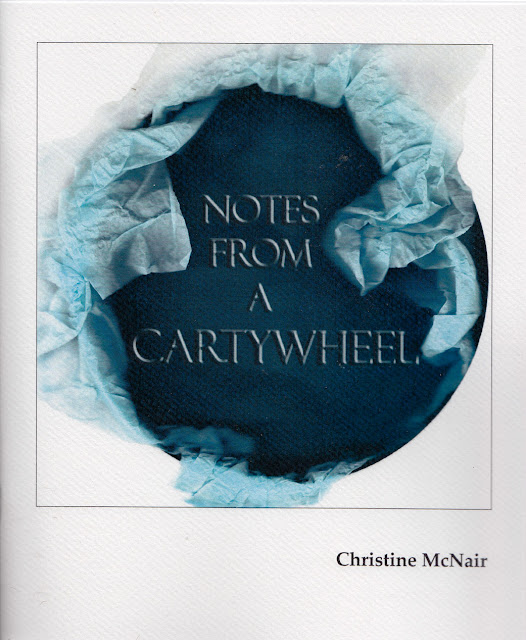 When I started AngelHousePress in 2007, it was to self-publish my own work, the weird, colour, that’s- not-poetry writing/visual poetry/maniacal doodles that I didn’t think I could find a home for anywhere else. I put out three of my chapbooks in limited editions of 26 copies only. I didn’t think I knew more than 26 people who would want this stuff, but I discovered that it was fun to design and make weird chapbooks, and I wanted to publish other raw talent and ragged edges made by those who rebelled against the status quo in some way.

AngelHousePress, along with my own writing practice, became a way to build community, to show fellow misfits that they are not alone. “The Angel In The House is a Victorian concept and poem about a very weak and mindless woman whose sole responsibility was to be charming. Perhaps you can see the irony.” (from the About section of the site.)

In the first few years, I published friends whose poetry intrigued me. My husband, Charles is a highly talented and skilled individual who is instrumental to the existence of AngelHousePress and everything else I do. It turns out he had experience in doing layout, typesetting and design. I married wisely. I could go on about how supportive and loving he is, but that’s beyond the scope of this essay. 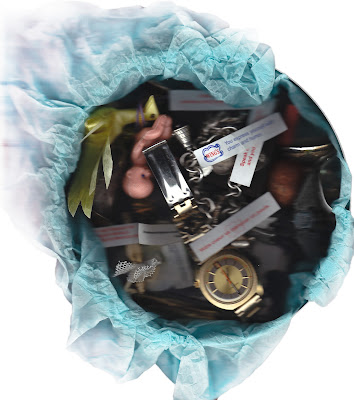 In 2011, we had great fun designing the chapbook, notes from a cartywheel, by my dear friend, Christine McNair, for example. I asked Christine for objects she owned.  She gave them to me in a wonderful old film canister. Charles had the great idea of scanning both the contents and the tin. I love Christine’s poetry and was over the moon to be able to publish it in the beautiful chapbook that Charles designed.

It wasn’t long before I started to feel like chapbooks were not the only way to publish raw talent, ragged edges and rebels. Thanks to Charles’ skill with making websites, and also because I became part of communities of visual poets and experimental writers all over the world, I wanted to publish their work, but even shipping complementary copies of chapbooks to other countries is extremely expensive from Canada.

It has always been my dream to publish print magazines. I have adored magazines since I was a little girl reading Mad Magazine, Tiger Beat and 16 Magazine, and eventually forking over a lot of francs to buy a copy of the French Vogue in Paris at the age of 16 because of its glossy full colour lushness. I devoured Mojo magazine for years because of the succinct and artfully written music reviews and free sampler CD. Unfortunately we couldn’t afford the costs of publishing a glossy mag full of art and literature.

In 2008, we began Experiment-O, an annual pdf magazine that comes out in late autumn and celebrates the art of risk through poetry, prose, art, visual poetry and work that doesn’t fit into specific categories. We have published 120 artists and writers. I am grateful to them for allowing us to publish their work.

In 2009, we had the opportunity to start NationalPoetryMonth.ca, an annual celebration of that poetry without boundaries or borders. Each year in April, 30 contributors from all over the world entrust us with their poetry, visual poetry and art.

In 2016, we started a podcast, the Small Machine Talks which I host, along with local writer a.m. kozak. We interview poets about their work and chat about the poetry scene in Central Canada and beyond.

I think we can do things online that can’t be done easily or as inexpensively in print. We opened NationalPoetryMonth.ca 2017, A Celebration of Women, with Primary Colours, a beautiful cine-poem featuring Sudanese-Canadian spoken word artist Roua Aljied aka Philosi-Fire. The film was directed by Derek Price and produced by Emily Ramsay. We’ve published additional video and audio poems in previous years as well.

My growing appreciation for artists and writers who were primarily sharing their work on social media informed my aesthetic and made me seek them out to be part of these magazines.

We started to publish chapbooks by poets like Jennifer K. Dick, an American writer who was living in France at the time. Her chapbook, Afterlife, which we published in 2017, is our only bilingual chapbook with text in English and French. It is a powerful story of women’s erasure and beautifully written. It’s an example of my aesthetic in many ways, leading outward to other influences such as Sappho. You can still buy copies of Afterlife and other chapbooks on the site.

One issue with being a publisher that many other publishers have stated as well is that most of the work I was being sent was by men. I wondered why. I asked my women writer pals whether they submitted their writing for publication much and if they didn’t, why not? Some women said they were simply too busy with life, taking care of children and parents for example and working at the same time. Others told me they didn’t feel their work was good enough to send out.

These were writers whose work I admired greatly. I wanted to be someone who supported them and showed them that their work had value. I wanted to help drown out the noise of mockery and dismissal we’ve all heard from men, and even as I say this, I can think of countless wonderful men who’ve been supportive, including my own husband, but you know, all it takes is one or two voices to make you feel lesser than.

Through AngelHousePress, in 2016 I began a free close reading service for new women and gender nonconforming poets who hadn’t had chapbooks or books published yet. I did the service for about a year and a half and responded to the work of 20 or so poets from across Canada. I read five pages of their work, gave them encouragement and a few editing suggestions, along with recommendations for additional reading of poets who were working with similar styles, methods or themes. It was a heartful and rewarding experience.

Increasingly I saw the work of those I had helped appear in other publications. It wasn’t a necessity for them to submit their manuscripts to AngelHousePress for publication consideration, but word got out and I began receiving more submissions from women, from gender nonconforming poets, from disabled poets.

The whole process of publishing chapbooks, getting them out there for review when there are few places to send them to, and distributing them, the costs of production and shipping, and the time involved, the storage space etc became too much.

I don’t think a publisher has to opt for one or the other. It’s not a binary decision, and I have nothing but respect for chapbook publishers who continue to work in print. I love chapbooks. For us though, it became necessary to cease print publication.

Online publication takes labour and money too, but these costs are manageable so far for us, don’t require storage space in our apartment, and ultimately we reach more readers through the online publications than we could possibly reach by the limited number of chapbooks we could afford to make in the styles we wanted to make them in.

At the end of our chapbook publication, in order to reduce our time, we worked with Elephant Print, a local printing company run by a woman of colour. The chapbooks were always well-made, beautiful and professional. I am proud of the chapbooks we’ve created and thankful to all who’ve entrusted us with their work.

In 2019, AngelHousePress published a Google map of women and gender nonconforming visual and concrete poets. Women, myself included, are constantly being told that the reason we are not being published or featured is because there aren’t many women making visual poetry or some such nonsense. I saw an article recently about artists reusing out-of-date technologies and it featured only men. Without even thinking about it, I could name at least three concrete poets who are women.

When I shared the invitation, I received a few responses from those who weren’t comfortable with having a presence on the map. They talked about persecution of artists in their countries, especially women, and the fear of online stalking, the abuse and bullying they’d received when they’ve been public with their work. There are many reasons why women and gender nonconforming artists, along with other vulnerable artists, are not well published.

We donated money to Freemuse.org, an independent international organisation advocating for and defending freedom of artistic expression. And by the way, the wonderful FemTech.Net has a Centre for Solutions to Online Violence, reach out to them if you need to.

Since I expressed my desire to center women and gender nonconforming writers and artists as both a publisher and a creator, I have been belittled, mocked, bullied and threatened with this-will-ruin-your-career (ha ha) type responses in e-mails and messages from men, some of whom are well-respected in literary communities I am part of. I will continue to advocate for women, gender nonconforming, D/deaf and disabled, 2SLGBTQIA and IBPOC writers and artists, and will form alliances with those who do the same, while rejecting and not supporting those who don’t.

AngelHousePress began thirteen years ago with the sole goal of publishing raw talent, ragged edges and rebels, but it has grown into a feisty feminist press whose main goal is to support and promote those who do not or cannot ally themselves within mainstream, often white, patriarchal objectives and to satisfy readers’ tastes for the same while finding concrete ways to advocate for the vulnerable. 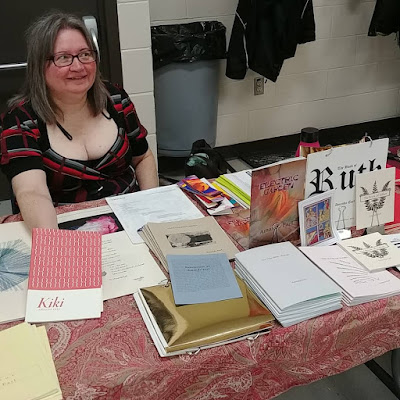 Amanda Earl is the managing editor of Bywords.ca and the fallen angel of AngelHousePress. Please visit http://angelhousepress.com/, http://smallmachinetalks.com/, http://nationalpoetrymonth.ca/ and http://experiment-o.com/ for more information or to enjoy a community of great writers and artists.