my favourite writing stills scenes, plasticine, to establish texture ─ a leaf balming the space between fingers, everything that looks like a pearl ─

before it thaws and peels away into the mind’s secret life.

i have called my criticism a hope to “capture what it feels like,” “pursuit of the ‘yes! exactly,’” a yell into dark to hear the dimpled shape.

what is the word for finding out there is one?

and why does it matter for a way of looking to zip into a self-contained jumble of syllables?

because a word introduces its own ideal, some solid knot at a distance. direction.

plus, out of words, worlds.

because although i love criticism’s easy fix,
although i know this is my stretch,

ekphrasis is the way i feel around everything.

memories thick as paint, as prone to oxidation.

the day after the word, i paint a self-portrait. cheetah print sundapple.

i look at myself, don’t; look like myself, don’t. lose myself, find, find my brother, both. stroke, stroke. a guessing toward recognition.

in the original portrait, my eyes smudge beyond fatigue, so i paint them shut. allow relief.

a mimicry of ekphrasis’ ultimate teleology,
which is a rendering beyond duplication.

the space between fingers, a pearl. 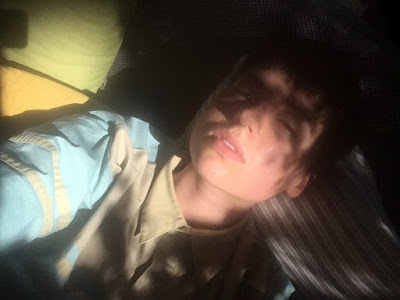 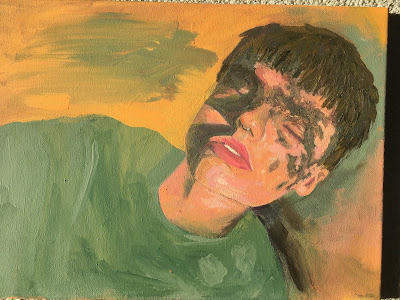 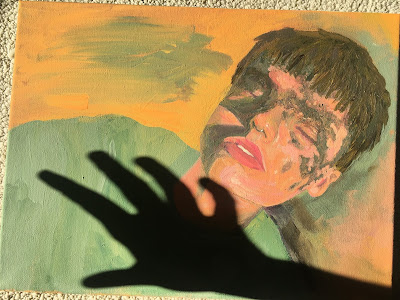 i learned about ekphrasis from Luther Hughes’ september 2019 frontier poetry column, where he discusses its power to assert and redefine what is considered art. i frantically tweeted my thanks, which will never be enough. 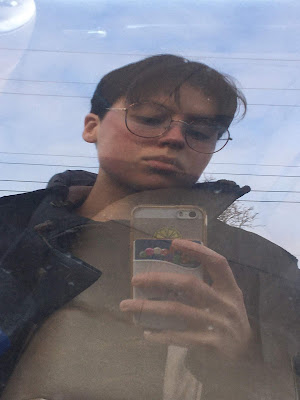 émilie kneifel is a sick fish, goo fish, they fish, blue fish (critic, poet, and co-creator of playd8s, a show for you if you need it). find 'em at emiliekneifel.com, @emiliekneifel, and in Tiohtiáke, hopping and hoping.