The Virus Will Tell Us

What and when the virus will count
us in on looms beyond normal
telling. Sure, it will tell us
when it has had its fill
when it’s sated for a while

ready to snooze. Can it tell us
tho, why we forget the stars’
numbers, their names, forget
to listen to the trees? Will it tell us
why that matters when it comes to

tell us? Will it tell us
the name of the sound of air
when the Bay warms rushing
through the birch? Perhaps the Virus
will tell us what we want now

that closed shops gape at empty
streets, shuttered schools
harbour only echoes, arenas
mourn in the dark. The virus
will tell us when it has had

its fill but will it tell us
does it relish us, smack
its viral chops as we do
over the meat we eat
with such relish? Will it tell us

why it has come to stalk us
haunting dog park, playground,
concert hall, bar?
Tiresias, trickster, verge
being, emerging between life

and the other thing
that’s not death but not living
either? Will it tell us what
it sees in the grey lands, counting
out lives, beads on a string

White Pine, or, Hitchhiking on the Road to Xanadu – a short sonnet sequence
—after A.J. Casson

1
The warrant of the pilgrimage lies in
the heart of chaos’s incongruous jumble
a thick farrago, a veritable din
out of which miraculously tumble

clarities of outline against the sky’s
abrupt modulation, varied tones
and erratic constellations of eye’s
making, empires erected in some zone

bulk, such heave in fountainous over
flowing spatial occupation insists
luminous verbal residue is all
you can hope for, that unexpected Kiss

or failed rhyme’s delicious delight
in missed cues, but may introduce errant
throng from nether depths teeming huddle
and unloose it in pantalettes open

4
The wild dance of death fire, corpo santo
to those in the know, does not involve kicks
some crazy licks, or run of the mill rhymes,
just skips about relics of sensation

of predictable ends terminating
in some dreary abdication of next

but can find no rhyme anywhere able
to ease translation of uncinctured time’s
outer verge & hither edge, a ruckus
of destabilized zone’s adamantine

encounters with wild luster seeps into
gnarled kiss, tree’s hieroglyphic passage to
and from kindred knowable beyond, Alter
Orbis, in the surge & song of some Bay

ice gouged out of stone in retreat from sun’s
return, a hole, a cold, blue remainder

hunger & hollow minds heap up charred ruins
of ancient forests, poisoned springs, & piles
of dead kids in wake of never enough,
a state crows observe with a sense of dread

8
—for Cass
The eye in the line doesn’t lie, it can’t
miss, one way or the other, the measure
of its own tones, here grey & white pleasure
scattered along rock beach, even if light,

aslant, glances off that exquisite tact
with text required when ending differs
from its end as radiant names jostle,
contend, sound filaments, glittering and

roused to resist with pine’s precise twist,
architectonic embrace with the wind

9
Twilight realm of thought, intermundium,
pools in the branches & clings to needles,
shadow within shadow, teases, wheedles
silly rhymes from the tree’s ingenium

fixation which is unable to smell
tree’s exhalation, fragrance founds its measure

in Pine’s memory & rhyme’s repeated
insistence on chiming in with surprised
connections demand trust in habit’s place,
uncertain incised & meted out in

unearthly portions with no beyond —
wave washed stones chatter, the sun responds 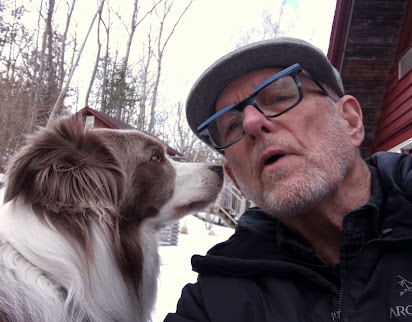 Michael Boughn moved to Canada in October, 1966 because of opposition to the US war against Viet Nam. After studying with Robin Blaser for several years at SFU, he worked in the Teamsters on the Toronto lakeshore for nearly 10 years before returning to university in 1982 to study with poets John Clarke and Robert Creeley. He is the author of numerous books of poetry, including Iterations of the Diagonal, Dislocations in Crystal, 22 Skidoo / SubTractions, Great Canadian Poems for the Aged Vol. 1 Illus. Ed., and City—A Poem from the End of the World.  Cosmographia – a post-Lucretian faux micro-epic was short listed for the Canadian Governor General’s Award for Poetry in 2011, prompting a reviewer in the Globe and Mail to describe him as “an obscure veteran poet with a history of being overlooked.” With Victor Coleman he edited Robert Duncan’s The H.D. Book for the University of California Press. He has also published books for young adults, including the Maple Award nominated Into the World of the Dead, a mystery novel, Business As Usual, a descriptive bibliography of the American poet, H.D., and numerous essays on film, writing, architecture and music. His most recent book is Hermetic Divagations—after H.D. From 2014 to 2018 he edited the online poetry disturbance known as Dispatches from the Poetry Wars with co-conspirator, Kent Johnson. A collection of his essays, Measure’s Measures, is forthcoming from Station Hill Press in 2022, as is a chapbook from above/ground press. He can most often be found with Case, his border collie pal, hanging out in dog parks or herding sheep.