I am not going to start a short review of Amanda Earl’s visual poetry by talking about Northrop Frye, am I? Dammit, but I am,—though I promise to mostly use him as a strawman. I do want to talk about Earl’s Vispo Bible, a 300+ page work in progress that attempts to render the entire Bible as a series of individual visual poems, but her project inevitably leads me to think about what exactly she is doing to and with the Book. Here’s where Frye comes in: he bumped into a dilemma that all professors of English Literature (distinctly not Literatures in English) encounter, namely the overwhelming prevalence of biblical reference in the canon. As he writes in The Great Code, “a student of English literature who does not know the Bible does not understand a good deal of what is going on in what he reads” (6). Frye wanted to understand, to affix meaning (in his words, “to possess it in totality” (7)), and, thereby, to establish an anatomical schemata of reading. The Great Code was his endeavour to anatomize the Bible, treat it as a gorgeous bit of symbolic literature and reveal its “conceptual unity”. Decoding, in other words, and revealing the secret coherence that holds the sprawling mass of text together.

What does this have to do with Amanda Earl? Like Frye, Earl has been working for many years to re-imagine the Bible as a holistic entity. But whereas Frye sought to establish the symbolic coherence and unity of the Bible as a literary text, Earl has been working to establish a stylistic coherence and unity from the Bible as a source text. It struck me that where Frye’s project was motivated by reverence for the holy words in the Bible, Earl’s Vispo Bible is marked by an irreverence to its words. In her words, the project is “a defiant feminist repurposing of the Bible in response to misogyny and homophobia” (1). Despite such an antagonistic frame, Earl admits the project also grew out of a life-long fascination with the Bible and its poetic offshoots by the likes of John Milton (who also inspired Frye to write his book), as well as health crises she endured that brought her face-to-face with the “angel of death” (4-5). This ambivalence built of both ideological resistance and sincere interest feeds into her work and shapes what she makes of it.

Genesis 11, for instance, tells the story of the Tower of Babel, when God broke up the human community into different language groups because of a rise, pun intended, in human hubris. The tower was felt to be a claim on God’s own grandeur. The confusion of tongues was his means of dividing us forever. Earl’s rendering of the chapter is almost floral in patterning, like a greyscale poppy of text, symmetrical and spirographic, presaging the interruption of war and its commemorative aftermath. The text is illegible, as befits the confusion of tongues in the story, but the overlapping patterns create a beauty that resists the moral of the original story. As a two-dimensional object, there is no obvious tower in the work – unless you think of the piece as a God’s-eye view of the tower. The octagonal blank eye at the centre reminded me of Borges’ hexagonal Library of Babel that collects all possible human writings into one impossible building. The poem, then, has an abstract point of coherence with the source text, and builds its shape not as illustration but more as symbolic impression of the story.

Many of the works are symmetrical, implying some kind of order in the source, but my favourite pages are the ones that are more mottled and disorderly, such as “John 1” where the text stretches out, turns over in upon itself, and crumples or folds in a mess. “John 5” slaps the words down flat and straight but wraps back from the left margin to the right as a palimpsestic boustrophedon. For those who know, John 5 introduces Jesus’ persecution for breaking Sabbath rules. He responds, “If I testify about myself, my testimony is not true […] Not that I accept Human testimony […] how are you going to believe what I say?” He accuses his prosecutors of misreading the Old Testament, confusing that text’s anticipation of his arrival and testimony. Earl’s text folds back on itself (reversing the old ways) and drops down in arched repetition embodying cacophony, dissonance, and conflict. The old prophecies are lost; the new reality is a stark object representing the change. Earl’s “Acts 11” is striking for descending even further into dissonance and reducing the Bible into illegible, asemic text. Acts 11 tells the story of Paul in Antioch converting and baptizing the first nonbelievers, thereby creating the first Christians named as such. This story is essential to the movement and growth of the Christian institution but is perhaps a point of departure for Earl from the story. The poetry disappears into a tumbleweed, merely accumulating followers in Christianity’s missionary phase.

How strange that Earl’s project compelled me to revisit the Bible, a book I haven’t picked up in decades, in order to understand the lush folds of her “heretic” visual poems. I wanted to know, in Frye’s terms, “what is going on” in what I was reading. The difference of the Vispo Bible from Frye’s canonical decoding is that authors like Milton and Blake evoke and allude to the Bible as an exercise in devotion, letting the glory of the Christian story wash through and illuminate their work with a secret code shared by believers. Earl’s project is more literary, whimsical, and haphazard. She picks and choses samples of text to illuminate her work by the strength of its poetry, perhaps drawn to its mystery or to some other resonance picked up by her grampheme synaesthesia or her interest in pop culture’s recirculation of Biblical phrases and narratives. She decodes the book based on her own rubric, rejecting certain ideological tendencies of the source text, capitalizing on patterns and numerology as befits her shifting interest in the project. If Fry, Blake, and Milton all seek to attain the coherence of the Bible, Earl pursues its overall incoherence especially to our contemporary society, establishing points of contact only where it feels relevant. The Bible has been unmoored from its presumed stable source. As the project continues, I expect it will become something of a journal (or almost diary) of Earl’s everchanging world and circumstance. The project is ongoing, alive, and ever-changing as it re-animates the Bible through Earl’s playful prism of feminist, avant-garde, and sensual poetics.

Works Cited
Earl, Amanda. “The Vispo Bible: One Woman Recreates the Bible as Visual Poetry.” Paper delivered at the Kanada Konkrete Material Poetries in the Digital Age conference. 5 May 2018.
Frye, Northrop. The Great Code: The Bible and Literature. New York: Harcourt and Brace, 1983. 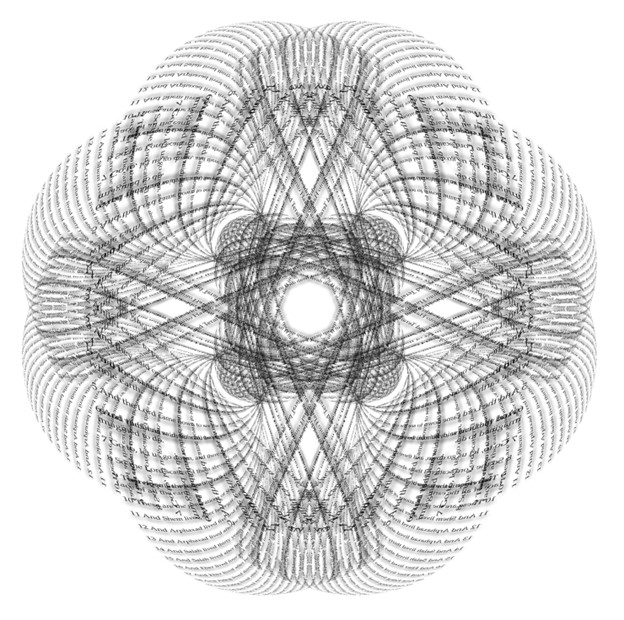 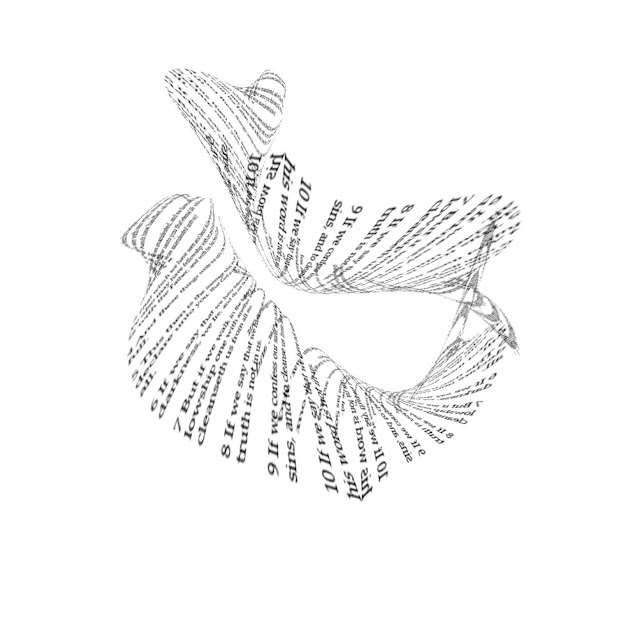 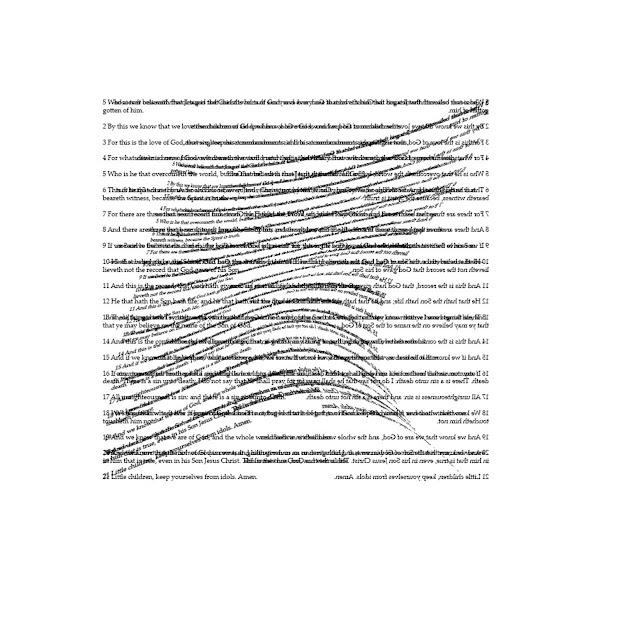 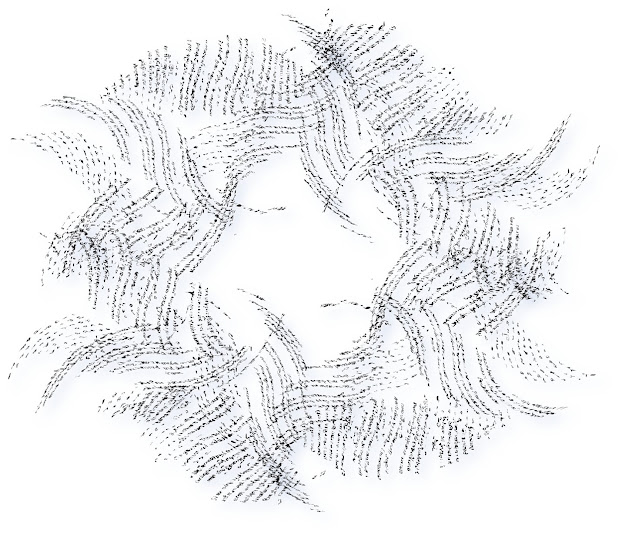 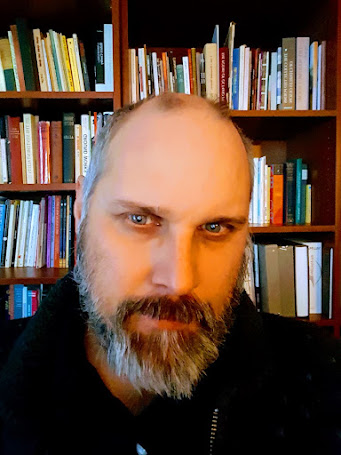 Gregory Betts is an experimental poet with collections published in Canada, the United States, Australia, and Ireland. He is most acknowledged for If Language (2005), the world’s first collection of paragraph-length anagrams, and The Others Raisd in Me (2009), 150 poems carved out of Shakespeare’s sonnet 150. His other books explore conceptual, collaborative, and concrete poetics. He has performed these works hundreds of times, in many countries, including at the 2010 Vancouver Olympic Games as part of the “Cultural Olympiad.” He is a professor of Canadian and Avant-Garde Literature at Brock University, where he has produced two of the most exhaustive academic studies of avant-garde writing in Canada, Avant-Garde Canadian Literature: The Early Manifestations (2013) and Finding Nothing: The VanGardes, 1959-1975 (2020), both with University of Toronto Press. He is the President of the Association of Canadian College and University Teachers of English (ACCUTE), curator of the bpNichol.ca Digital Archive, and Associate Director of the Social Justice Research Initiative. His most recent book is Foundry (2021), a collection of visual poems inspired by a font named after a 15th century poet. He lives in St. Catharines, Ontario.