Sunshine Sketches of a Little Town

an unreliable narrator, whose descriptions of the town
twist ending forces readers to reconsider their point
Anagnorisis, or discovery, is the protagonist's sudden
Poetics, as part of his discussion of
drama (to include comedy, tragedy, and the
Satire and political satire use ironic comedy
its greater purpose is often constructive social criticism,
either for consensual reform or powerful revolution.

a body of knowledge about social order and
Thomas Hobbes is recognized as the first to
expounds an influential formulation of social contract theory.

posit that individuals have consented, either explicitly
theory of consent is historically contrasted to
include implied consent, express consent, informed consent and
choice, or similar manner of determining blood alcohol concentration.

wine may speed up alcohol intoxication by helping
the activity of acetaldehyde, a metabolite of
the partial oxidation of ethanol by the
group), and is often abbreviated as EtOH.

acronyms (some pronounceable, some initialism) or grammatical
Times, DMV for Department of Motor Vehicles), but not always
understood, particularly in the context of driver's license
is used, for instance in the Vienna Convention on Road Traffic.

does not require a front vehicle registration plate on
vehicle or trailer for official identification purposes.

various centre to centre-left progressive movements in
economic development and social organization are vital to
keep in mind the substitutability of these
semantic interoperability of types in a hierarchy,
such as logic, set theory, model theory,
correct mathematical reasoning or to establish foundations of mathematics.

metamathematical concepts, with an eye to the philosophical
Metamathematical metatheorems about mathematics itself were originally
a deductive system (axioms and rules of
related but distinguishable senses: "logical axioms" and "non-logical
tautologies in the language; in the case
where a tautology is a repetitive statement.

logical tautologies like "Boys will be boys"
where a tautology is a repetitive statement.

Sometimes logical tautologies like "Boys will be
where a tautology is a repetitive statement.

drawing and mapmaking were added to the
audience. This is the concern of map design.

Next, the cartographers experiment with generalization, symbolization
to abstract spatial information at a high level
of geodata, including vector files, raster files, geographic
image files with varying dissemination, production, generation, and
types of image file compression algorithms: lossless and lossy.

in all animals except sponges and placozoa.

exist for the taxon; the scientific name
set forth in Linnaeus's system in Systema Naturae
is considered the starting point of zoological nomenclature.

which applies to plant cultivars that have
cultivars produced by breeding and selection or as sports,
will sexually reproduce and have offspring together.

Human offspring (descendants) are referred to as
lineage, affinity/affine, consanguinity/cognate and fictive kinship.

nurture kinship, or familiarity via other forms of
values from anthropologists' own cultures (see ethnocentrism).

cultural identity, such as language, behavior, customs,
unique among known systems of animal communication in
visual display of distinctive body parts or
hunting territory for its family or group.

It is distinct from scavenging on dead

carrion, it is also a herbivorous feeding behavior.

mouth parts and teeth, such as in
Some animals, particularly carnivores and omnivores, also
muscle, fat and other soft tissues) whether
tissue connects, surrounds or supports internal organs
everywhere in the body, including the nervous system.

statement: WikiPoems are inspired by the chance-based work of John Cage and the N+7 technique popularized by the OULIPO as combined with my interest in digital poetry and hypertextual media. To compose them, I began on the Wikipedia page of a popular and/or notorious CanLit novel, located the seventh link on the page, copied out seven of the surrounding words (counting the linked word or phrase as just one), then navigated via the link to a subsequent page. This operation is repeated until the poem feels done. There are several other constraints determining formatting and word choice in effect (hyperlinked words/phrases appear in bold, for instance). My hope is that, in mapping a series of associative connections made possible by hyperlinked encyclopedic texts, these poems emulate the intertextual relationships we as a culture form with and between works considered literature. 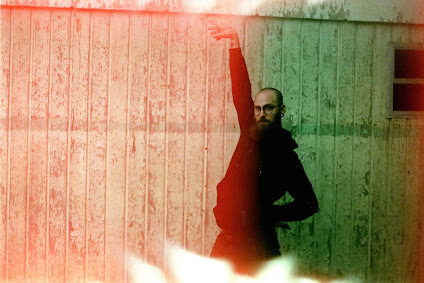 Kyle Flemmer [photo credit: Sarah Thomas] is an author, editor, and publisher from Calgary in Treaty 7 territory. He studies digital poetics at the University of Calgary where he is a teaching and research assistant. Kyle founded the Blasted Tree Publishing Co. in 2014 and is a former managing editor of filling Station magazine. His first book, Barcode Poetry, was published by The Blasted Tree in 2021.