And while the coronavirus and the pandemic that ensued had yet to be encountered, pandemics infusing the social, political, historical, and bodily well-being—like miasmas—became undeniably visible, if not acknowledged hence. Around then, I’d been trying to bring together a 12th issue of Yellow Field, and, while intended to be the last, I suddenly felt a complete sapping of energy to turn toward the project of a magazine, even though two of these texts were already on my nightstand (with the other two soon to arrive). I continued to revisit these four publications over the years that followed, and continue to read these four authors whom I came to know through the collating of Yellow Field. Now, after—or because of—the long, terrible maw of the last presidency, I hope I’ve found adequate words to say about each work and how I’ve come to see them, individually and together.

Meredith Stricker’s Our Animal figures Franz Kafka (literarily and historically) as guardian angel against the pandemic Amnesia.[1] Kafka’s writ small and large, and quotations from the neo-surrealist of Bohemia permeate Stricker’s writing, calving mitochondrial imagery from the work of as well as from the life. Collage proffers one line of descendance, but one where visual cacophony complicates “coherence”; still, the quantum of line remains the stratum meaning coheres around in these poems—even as they demonstrate diversity of length, leading, font point, orientation, illustration (a photographic likeness of Kafka drops in!), and simultaneous layering. To the last quality, the layering of texts and spatial partialities aren’t ruinous architectures, as they might initially seem, harkening to a more familiar poetry that looks similar on the page… Stricker’s spectra of lines are concurrent, leveling at history a countenance. Kafka is a scion, but a scion among us. Forget for a moment that the Anthropocene isn’t privileged here, become synonymous with “history’s glories and progress, / corrosive rust on medals and speeches” (45). Estrangement from the intimacy of reading is everywhere familiar! This is what cacophony has to offer—that it’s actually a choir if we can learn how to listen. Stricker orchestrates the countenance necessary: “the color blue / approaches, falls down, was once heaven now / litter pushed sodden into gutters” (26), as again and again the forsaken illumines in “the corolla / of strangeness” (45). 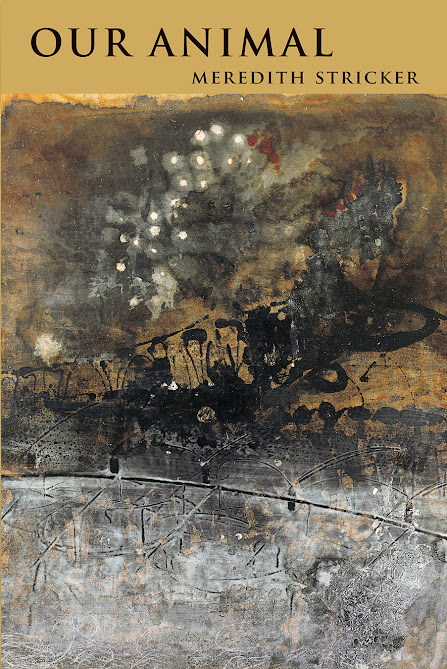 Lori Anderson Moseman’s Flash Mob queues up, or clues us in to, activist selves—as through failure-learnt, grassroots-won apothegms, like: “it is best to negotiate with guardian angels in flight” (77). Arisen between twin pandemics of Climate Change and Societal Apathy, this flash mob is the antidote to plutocracy—Hades, after all, being not only god of the underworld but also, etymologically, of wealth (in precious metals and gems). The book itself works visually by means of devices: device of hieroglyph; device of prose poem; device of hashtag qua device of couplet-like sonnet closing; device of inner-referentiality… all of these “illustrating” the interlocking machinations of bespoke bureaucracy.[2] Instead of a multiplicity of voices in concert, Flash Mob presents an uncorrelated coterie; that self that is cohort; the multiplicitous aspects we lend to tend causes. From the section Old Settlement, the poem “fingerlake scout denies halo around her big feet” displays the happenstance, folly, earnestness, and grace involved in addressing the coming (or present) crises:

The phosphorescence field forms every fifteen steps with no regard for sacred places. The halo comes on schedule whether water flails off a glacier-carved cliff or the trails hide in a thicket. Flagstone well placed by CCC crew can brighten its glow. Any chipped thing that won’t budge is brightest. Halo-foot doesn’t see it; when her troop does, they elect her dues-collector (45).

The vise is cipher: through the many namings, “Halo-foot,” et al., the poems hold a mirror to tall tales in the making. Not dwindled down to a single set of events or episteme (the Occupy movement, for example, or any unilateralism), the tone metronomes between political and personal, all the while satirical: “# No angel, Halo-foot can’t soar or zap. Her power is a steady gait” (ibid.). 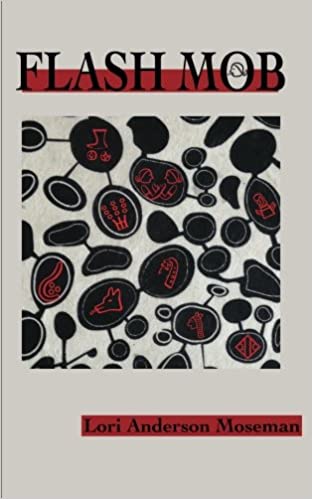 The poetics of Hostile Books encourages formats that dissuade the reader [i.e. bar of soap set with glass; book inside watery bag], and Tyrone Williams’s Trump l’oeil may even exceed this parameter of “materiality” with an invitation to disgust. Foregoing the issue of used Kleenexes, Williams answered a call for work from the publisher “four days after the [2016] election, with a proposal: fifty-two crushed tissue boxes containing epithets directed at the president-elect, though largely inspired by the campaign season.”[3] Symbolic in number and by misuse, the crushed-boxed epithets challenge the systemically racist origins of the electoral college while also resisting narratives of dismay prevalent in white, left-leaning America (following Donald Trump’s presidential win) that such an election result could occur in this country. These faux-consolatory tissues, dispensed with a not-so-soft touch, bear witness to as many “pandemics” as there are strains of flu: “Blister-shout” reads one; “WEAPONIZED ENDANGERED SPECIES” another. No panacea, “tolerance” is subverted thirteen times over in these messages unbottled: “the ‘illusion’ of three-dimensional space as isomorphic with, for lack of a better word, ‘reality’” [Williams]; Pandora’s already been here; this is not a goddam tissue box. Elsewhere in this review I’ve mentioned a leveling countenance redressing pandemics; here, the play from tromp to Trump fixes that gaze, akin to undoing electoral math: 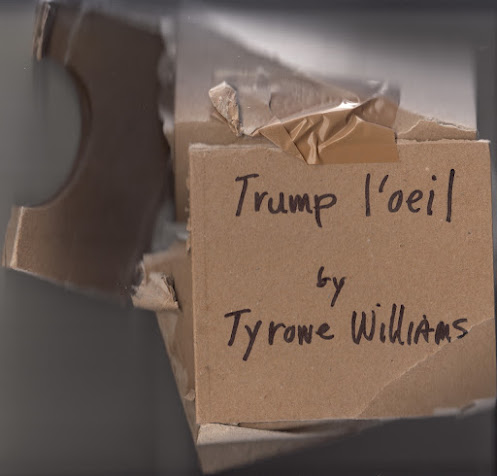 Nielsen’s Tray feels like two sets in the same night’s session; the first highly focused, the second more varied; but let’s say all the instruments remain, and the audience is in this together… The collection/first section takes its name from Trayvon Martin, in a more familiar calling—the way one might call out to a family member. The particular finds frame quickly in the poem, through settler, colonial, political, and religious relationships: “George / The father / Of his / Country / Another country another James / Another George told / King George of King James / Version sold” (6). Furthermore, these frames bring to the fore—as Cornell West would remind—the double-sin of two genocides at our country’s founding: the taking of land from Native Americans and the enslavement of African peoples: “Susan Constant, Discovery, and Godspeed / Bright ironies / Ivories tickling unseen sea bed” (7). Nielsen’s double-spaced lines and “unfinished” phrasing leave ludic passages for the reader to go down; one can here/see how echo undoes distortion of hear/say in lines like:

The boy in the

The boy from the

Was watched by the neighbor

The poem engages the discourse of our long, long pandemic (before social distancing, before George Floyd Square, before Tray) through devices, like re-echo, which swing the static soundbites and memes we’ve become accustomed to—“hoodie,” “neighborhood watch,” “stand your ground”—into: “He stood the ground / Dearborn/Stillborn / Standing on a porch while black / Renisha / Renisha” (36). “Tray” also enacts use of naming, lists, numbering (“numerology”), and typographic symbol… perhaps most hauntingly in the lines of pipes [ | ], or bars, that draw divisions and make comparisons across. That Nielsen’s poem can reach such pathos is matched by “Escamotage,” the second section of his book, where the reader finds love poems, blues rhythms [“Against the boasts / Aghast / Gold Coast” (48)], consumer culture plus capitalist critique, and puns, as in the poem “Adam and Eve in MacArthur Park,” quoted here in full: “Someone left the / Snake out / In the rain” (45).[4] Lyricism remains throughout, and a consciousness of absence; as though a reminder of all of our pandemics and their complementary, competing—at times obscuring—contours. As if to say, even when there’s not music, there’s still this:

Not the notes themselves
[…]
but the moan 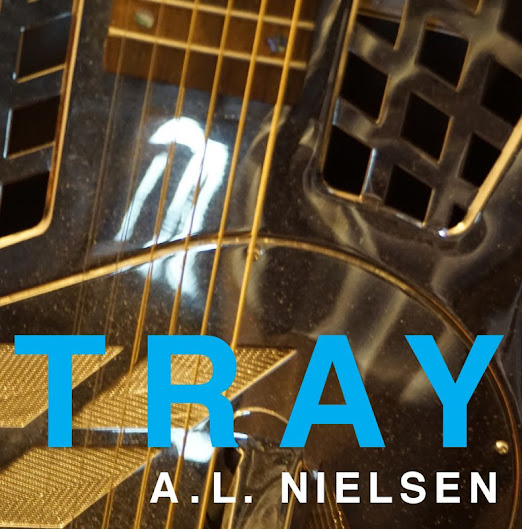 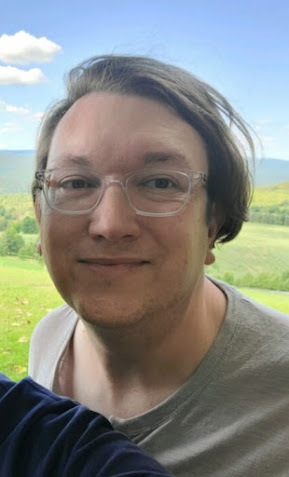 Edric Mesmer edits Among the Neighbors, a pamphlet series on little magazines published by the University at Buffalo’s Poetry Collection, where he works as a cataloging librarian—To subscribe to the series, just send him an email! His book, POEMS: now & then, is out from BlazeVOX [books].

[1] While I wasn’t conscious of the title of Mary Jo Bang’s marvelous introduction, “Our (Kafkaesque) Animal,” while writing this review, it undoubtedly informed the terms of consideration.

[2] The first section of the book, “Full Quiver,” was also published as an artists’ book (Propolis Press, 2015), featuring Luwian hieroglyphs and QR code.

[4] Kudos, too, to the publishers at Make Now for setting the poems in a font so reminiscent of that used in the books of Lucille Clifton from BOA Editions—she being one of the dedicatees of Tray.