Icebergspeech . snowscript
wanting
to break thru the un
singable remnant.

thorned eyepaths,
your poems
travel thru
sleepmountains
etching
the acidsong into the furrows
of what is.
your incandescent arrowword
(trancefigure
sunk finally the last
dreamproof skiff
where the symbol
clings to the broken mast
— sad pennant
of yesteryear.

( oh, to have
that distance —
distance in closeness
distance is closeness —
a different identity)
yours is that distance’s
eye eroding
last year’s snow from your
forehead.
— Je est un autre. —

3.1. Nothing is blacker than the luminous morning of memory.

3.2. Knock on the door of your loneliness and ask for the master: when the door is opened for you, you will not have spoken in vain to humans.

3.3. Among the angels’ host only every tenth carries weapons, though he does not know how to use them.

3.5. Bend when faced with overwhelming might, but as a prisoner speak a language that cannot be understood.

3.6. Learn from autumn how to drive away birds.

3.7. Teach the fish the language of fishing hooks.

3.8. She claimed to be a scale whose plates were her hands; but she made these into fists every time you wanted to put a weight on them that did not come from the emptiness of her heart.

a sudden gust of wind tore the face away and revealed the veil.

He denied himself this too: the joy of joylessness.

9.1 Only then may one count the vultures among the birds of prey when it can be ascertained that they took on the voice of humans.

9.3 He put no leaf in front of his mouth because he was afraid to uncover his sex.

9.4 Someone who stepped into the dream of a rifle bullet and overcame it.

9.5 He peeled the apple before plunging the knife into his heart.

9.6 Weeping you tear open your veins; weeping you close them up again.

9.7 Disciplined, he waited for the order to disorder. [in French in the original]

10.1 Stones too are flowers, only their scent is stronger.

10.4 “You speak so incomprehensibly,” the dead one said to the dying one, “you just stammer, you stammer like a newborn. Speak more clearly, speak more deadly!”

10.5 “This here is the map of silence,” the wise man said, pinning a large black leaf to the wall. “Now calculate the scale!”
One of the pupils did so.

10.6 Reaching the bottom of the sea, the man who was drowning voluntarily got frightened: his feet hit swampland, into which he sunk, always sinking deeper, it was an endless sinking, “I am heaven,” he heard the swamp say. “To die isn’t worth it.”

10.7 Wait patiently on the shore. The drowned one will save you.

10.8 “We shall be friends,” he said, while taking hold of my hand. — I took hold of his words and entered loneliness.

11.1 When praying died down on earth, a startled God woke up.

11.3 A heavy word that wants to be breathed lightly.

11.4 A word: so old, so gray, that silence apprenticed itself to it.

11.5 The rock face, punctured by the roar of the ocean; the ocean, ploughed through by the storms of infinity; infinity, furled by the whisperings of the forlorn.

12. The one door answers to the other, and the one — the fool — who stands in front of the first door, stops! he claims to have made out a sign meant for him and believes — what, in fact — does he believe? He believes that he has to knock anew.

13.1 To go into the desert, to be able to reach its most torrid middle, so as to bury there the plan of the city of a thousand fountains.
Paris, May 13 1951

13.2 My friends: they wired me congratulations for the approaching day of my death.

14.1 And even the trace of his blood had the color of his spirit. No other.

14.2 A language, as incomprehensible as two identical words that hover on two ready-to-kiss pairs of lips.

COMMENTARY: These texts were gathered in a document that is probably an attempt to ready a number of his aphorisms for publication. In 1949 Celan sent a ms. to Max Rychner at the Zürcher Zeitung with “a few pages of short prose I call ‘Counterlight,’ and that, there where they are the most idiosyncratic, perhaps help to prove the reality of poetry.” From Paul Celan; “Mikrolithen sinds, Steinchen” Die Prosa aus dem Nachlaß. Kritische Ausgabe. Herausgegeben und kommentiert von Barbara Wiedemann und Bertrand Badiou. Suhrkamp Verlag 2005.

Paul,
if I may,
I brought you
here, to another
blacksoil earth,
cousin to, I
hope,
the black soil
of Czernowitz.

The meridians of,
because in,
us
humans never
travel in
straight
lines,
they stutter,
wander off the
straight and narrow,
bending
sans breaking,
into tomorrow’s
blood rich
marrow. 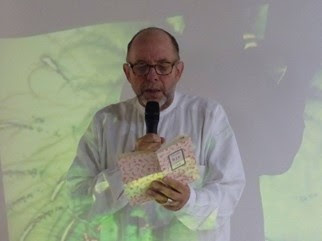 Pierre Joris has moved between Europe, the US & North Africa for some 55 years now, publishing over 70 books of poetry, essays & translations, as well as a number of anthologies. Among recent books are Fox-trails, -tales & -trots (poems & proses, Black Fountain Press 2020); Memory Rose into Threshold Speech: The Collected Earlier Poetry of Paul Celan (FSG) & Microliths: Posthumous Prose of Paul Celan (Contra Mundum Press), both in 2020; A City Full of Voices: Essays on the Work of Robert Kelly (CMP 2020); Arabia (not so) Deserta (essays, Spuyten Duyvil Press, 2019); Conversations in the Pyrenees with Adonis (CMP 2018); The Book of U (poems, E. Simoncini 2017); An American Suite (early poems, Inpatient Press, 2016), Barzakh: Poems 2000-2012, (Black Widow Press, 2014) & The University of California Book of North African Literature (volume 4 in the Poems for the Millennium series, coedited with Habib Tengour, 2012). When not on the road, he lives in Bay Ridge, Brooklyn, with his wife, multimedia praticienne Nicole Peyrafitte.