Light Waves The Leaves (above/ground press, 2020), Razielle Aigen’s debut chapbook, lays out a poetry of constraint and connections. The fourteen poems of this collection turn between the personal and the interpersonal; between our relation to others, to the cities we live in, the world around us, and the ways in which these exist between us. This is a collection of enormous exploration carried out in small spaces, as Aigen works in and around the themes in her characteristic poetic form: tightly boxed, the boundaries rarely broken, poems whose spacing, syntax, and line breaks are employed to tremendous effect. 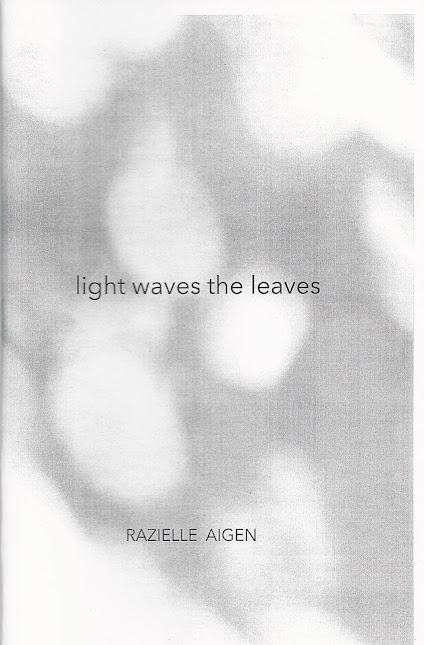 Reading Aigen is to read a poet deeply attuned to sound and timing, her columnar form slowing the eye and allowing the poem space to leap and offer small epiphanies:

Aigen’s work is difficult to quote in sections; in terms of individual lines, almost impossible, each one so interconnected to those around it, so dependent on its particular spacing that it’s difficult to know where to begin and end. Aigen’s full effect, the feel of her poems, is best experienced in a poem’s entirety, in the way it begins – almost fragmentary – and continues dreamlike to its conclusion. And within these poetic moments, Aigen creates an uncertain space where the internal and external world are half-fused, open to the life of her poetic voice. In “Light Waves The Leaves”, the speaker speaks of words leaving their companion’s eyes on waves of light; in “From the Outside”, of creating a loophole in reality, a “visual palindrome” in which rain rains on both sides of a windowpane, the speaker and their companion entering and exiting their shared space, our own perspective shifting and wobbly, the separation of person and place continually in flux. And all the while, the poem’s hypnotic flow is held by Aigen’s skillful use of sound and rhythms, as in:

That repeated rhythm dropping and lifting, line after line, almost Anglo-Saxon in its chant-like intensity.

The confluence of speaker, subject, and place is one of the major themes of this collection. But as interested as Aigen is in this, she is also concerned as with the self and its connection to the temporal, explored in poems such as “Birth of Venus”, “Eventide”, and “Wintering”. In the last of these, she plays on the title with its implications of staying still, or in a particular place:

But while she opens with a projection of other people’s perceptions on the subject, the “she”, Aigen’s quick to turn around their understanding:

… time is what is

happening .  at any given

is spanning  .  a tinting at

the   beginning  of  being

Aigen carefully closes the poem with an inversion of the original usage of “beginning” and “being”, breaking her own form to create lines of single, left-justified words to heighten what’s really going on in this wintering: an unseen and personal expansion, one that’s invisible to the simple interpretation of outside observers.

… a tint of timing

the being of a beginning  .

Light Waves The Leaves is a collection that demands slow and repeated readings; a collection in which meanings can turn on inversions, slant rhymes, word-halves, hard enjambment. In it, Aigen explores in tight spaces what it is to be part of the world, and for the world to be part of us. She expands and contracts time, showing the deep disconnect between the inner and outer self; and throughout, she does so with an powerful command of sound and rhythm, creating a world in which the poem’s sonic dreamspace hovers unbounded over the written, the offered truths a little different every time. 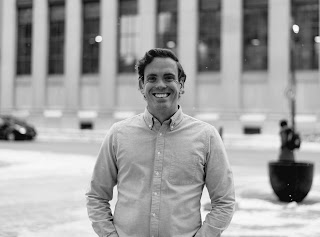 Julian Day lives in Winnipeg, where he works as a software developer. His work has recently appeared in Train and Whale Road Review, and his debut chapbook will be published by Anstruther Press in spring 2021.