Worm Holes developed out of several years of thinking about the idea of the apocalypse through a series of urban spaces I've lived in over the last decade. The chap is a serial poem, which oscillates through ekphrastic engagements as well as my own autobiography of urban drift, through a series of lenses: gentrification, economic collapse, queerness, homogenization of culture. It was written, in part, in dialogue with artist Cao Fei's multimedia exhibition La Town,

Five years ago I stumbled into Cao Fei’s La Town installation while wandering PS1, MOMA's satellite location in Queens. The exhibit seemed to glow in the too bright light of day after a seamless nocturnal slip into extinction, reemerging into a city that spat me out just a few months previous. Cao’s nightmare models scattered around the gallery—crumbling cityscapes, pastoral wastes, vast yet claustrophobic galleries, airline hangers packed with featureless crowds and escaped zoo animals—equal parts Through the Looking Glass and Escape from New York. Dozens of display cases featuring tiny railway figurines, distressed by hand, fluxes of hardened gel obscuring flames or plasticine waterlines rising to envelope train platforms—a wormhole metropolis, a city on fire, a night museum, a biblical deluge.

Having lived in at least a dozen apartments over the last decade, guided in part by economic and emotional ground zero, death, illness, depersonalization and creeping debt, Cao’s looped film with it’s Hiroshima Mon Amor narration panning over motionless, apocalyptic stagesets matched a pervasive, libidinal fear I had carried with me out of a strict evangelic childhood. A non-linear continuum blossomed in my mind like the germ of Satanic panic, globally gone to seed. Or a sudden point of connection—reading Dhalgren on a fainting couch in another city, another relationship I escaped from almost too late. No rapture at the end of my portrait of an artist but something new, inscrutable, dangerous, liberating. 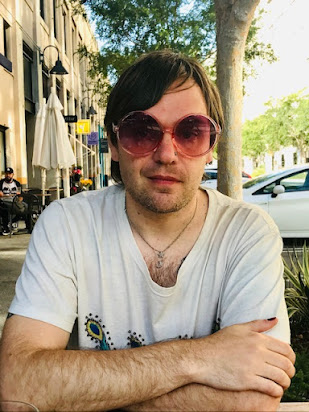 Jamie Townsend is a genderqueer/transfemme poet and editor living in Oakland, CA. They are the author of 6 chapbooks as well as 2 longer collections Shade (Elis Press) and Sex Machines (speCt!). They are also the editor of Beautiful Aliens: A Steve Abbott Reader (Nightboat) and Libertines in the Ante-Room of Love: Poets on Punk (Jet Tone). With Nick DeBoer they curate Elderly.