All year as writer in residence, I was thinking about writing and I came up with some theories.

What is it about birds that makes me think of writing?

Is it their hollow bones, the fact that some of them can’t fly?

What is remarkable about a starling murmuration is the complete shape, the elegant turns, the space each bird so gracefully keeps between it and the birds above, below, beside, beside.

Is it the sky? or the egg? Or maybe it’s the way the cuckoo always makes a stowaway of its egg, stashing it in another bird’s nest?

Writing. A theory. Part one.

Meaning is an ostrich, head stuck in the sand—who dug the hole?—its bum-up plumage boiling beneath the sun. Its egg is big as a child’s head. Its legs like Can-can dancers, its feathered rump like their plumed skirts or feathered rumps.

Perhaps it is the skin and large egg-sized eyes. What does it mean to have an ostrich appear in one’s dreams beneath moonlight, a galoot of a bird yet silent? What does the moon feel upon reflection? What does an ostrich feel? Perhaps what a writer feels. There is space inside the breast of an ostrich for a basketball, a turkey, a heart larger than two fists, a human head.

How many writers does it take to change a lightbulb? How many moons? How many ostriches?

All year, I was thinking the branches of a tree are like birds or the flight paths of birds. Beginning with the singularity of the trunk spreading out into the fractal bifurcation of branches. Like cracks in a windscreen or a window or like roots. The singular shattered, then reaching to the sky.

A story is like this. Or language. First there was only one thing to say. Then there were many. What was the first word, the first story?

If a thousand birds surrounded your head and began pecking at it, would the shield of your skull, its bony helm, would it fracture like an egg and reveal the naked plum of your brain to the sky?

How is writing like this? Like the bird, the shell, the sky, the brain? How is writing like the tree or the ax being carrying slowly, inexorably on the shoulder of the forester as he leaves his little cottage, a sandwich and coffee in his lunch bag, kissing his wife, his child goodbye, how is writing like the wife now alone, on the internet learning about rocket fuel and bravado, about light sockets and the tango shoes, about one way tickets to Cobalt, Ontario where she will lead a simple life of quiet concentration and write? And burn down what needs to be burned. Build what needs building.

The eagle: I’m the best, I can fly in the air. The cheetah: No, I can run on land. I’m the best. The shark: it’s clearly me. I can swim in water. The duck says nothing but smiles its duck smile.

Which is another way of saying, If God had wanted us to communicate, she would have never invented ducks."

I woke up this morning wondering how is a lightbulb like a bird? It was dark, the sun was just beginning to rise, I could hear birds outside my window, chirping, squawking, singing.

How many writers does it take to change a lightbulb?

One to change it; nine to think they could have done it better.

How many writers does it take to change a leaf?

But why do we have to change it? the writers ask.

How many writers does it take to change a wing?

Just one, but the light bulb has to endure a series of conflicts and challenges before it finally changes.

How many times have I repeated the same joke, or said, there’s a wisecrack in everything. It’s how the light gets in.

I turned on the light beside my bed and began to read.

So, I’m sitting on my porch eating breakfast and the mail carrier arrives. with the mail.

Writing has hollow bones, I say.

Or only hollowness and no surrounding bird.

Flying is falling with good PR.

Then I say, Writing is a lightbulb. How many books does it take to change?

The mail carrier looks at me, surprised, then says,

What happens if you fall when you’re writing, like you’re jumping out of a cloud, the way lightning does?

Then the mail carrier hands me a letter. I had sent it to myself. I was pranking myself, hoping to surprise myself because, after all, I am a writer. Myself.

The anatomy of the avian heart. A theory of writing, Part three.

A bird’s heart, like those of mammals, has four chambers. A beginning, middle and end.

There’s also conflict, It’s man against nature, self against society, mammal against mammal and lightning strikes and ricochets off the roof of the village church and cooks the forester, the ostrich breeder and the mail carrier equally, the scent rising like a ghost into the storm-clustered sky. In their coop, the small boys and chickens frighten and cluck, and the writer licks the nib of their quill and begins to write.

Writing inhales and squeezes like a heart, puckers its feet and flies off into the clouds.

Ok, this next part gets clever. I want to be Gertrude Stein.

I write of birds. You could say, I bird my time. The sky is filled with flight. The land with flightless birds. Birds like ducks float. The night is crammed with what isn’t day. The day allows us to write of the night. Inside the night it’s too dark to write, but when one changes a lightbulb one sees like a bird.

Wittgenstein writes, Whereof one cannot speak, thereof one must be silent.

But one can change this “cannot” with writing, one can use writing to explore this whereof and thus change the thereof.

Existence may precede essence but writing proceeds. And it precedes the way a mother duck leads her ducklings. Whereof something swims, walks and quacks like a duck, thereof it is a duck. Or a viable duck simulation. Someone replaced my heart with a duck and I never realized. Not until it rained.

So, write again and Fall.

Fall with your hollow bones and your heart that is a duck. Your dream that is an ostrich under the moon. The clouds that cough lightning.

You are an egg and writing is an egg. I’m here at the end wrapping it up with bold statements, with sweeping conclusions. Your brain is a plum that someone was saving in the icebox but was so cold and delicious someone ate it anyway. How many drafts does it take to change a lightbulb? Oh, you say. Oh, I’ve just realized I’ve said Oh to mean a lightbulb. To mean a lightbulb has appeared above my head like a moon or a bird or a cloud or, in fact, my own hair.

Who’s on first but What is the theory of writing.

Even silence has something to say.

It’s never over because someone is just about to sing. 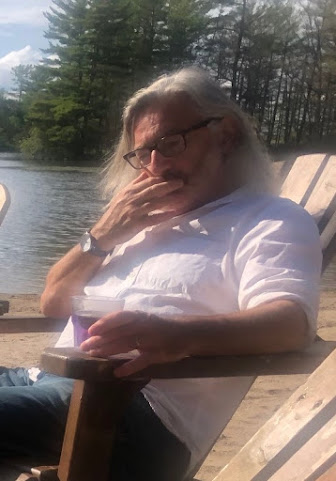 Gary Barwin has been writer-in-residence at the Hamilton, London, and Toronto public libraries, Hillfield Strathallan College, McMaster, Western, and Laurier universities as well as University of Toronto (Scarborough) and most recently, Sheridan College. His second book with Tom Prime (a student who he met during his Western residency, now, a frequent collaborator) Bird Arsonist will appear in 2021 with New Star Press. Their first collaboration was A Cemetery for Holes (Gordon Hill).