Church was a place of hard pews and musty prayer books,
good ol’ fashioned sing-a-longs and strawberry socials.
Still I hated it, whether it was the Christian-lite of
the local United Church, or the incense-laden masses
at the Catholic school I attended. I never understood
how priests could love miracles, but hate magic, when
it seems to me Jesus was a magician raising the dead,
multiplying bread for the masses. Want to hear
a confession? God is dead, and the real magic is living
righteously anyways. Once, I found a moon wafer, a host,
the body of Christ, after mass, and cupped it tenderly
in my hands, as if I could hurt God acting carelessly.
I returned it to a priest, but then stayed up all night
worrying and praying. The dark mute-deaf to my pleas.

Do you mind if I get personal? The I is just a place-holder
in this poem anyways. The self that writes, “Truth is simply
a kingdom of telling, not of facts”, is not the self that will
read this a day later, crossing out words, adding new ones,
hoping it all leads to some sort of elegance, of understanding,
which sounds boring and ordinary, I know— the I knows
what it knows—but at least the words come out half-right
in the declining light, though few care as passionately as me,
the me who wants to be moved by poems, me who wants to
know all the ways of knowing what people think about sparrows
and clouds and windfallen apples so I read books. The I inside
writes some too. Language is the real school. I sit in the back
of the class looking out a window at a small grove of trees
where sits a giant bronze sundial, the hour getting late.

I never read Berryman’s Dream Songs or Lowell’s Notebooks
but here I am, improvising a long sequence, trying not to leave
anything out, my intelligence a little restless, my imagination
a little inclusive. I am hoping to put the then back in authentic,
the now back in knowledge, my concerns free-ranging and
arbitrary, although I am the first to admit I am not ideally
suited to restraint, when it is amplitude, expansiveness I seek,
outfitting my poems with pennies on train-tracks, absinthe in
Prague, black-flies in June, death on repeat. I want to pack it all in;
everything I mean. The highs and lows. The kitchen sink. I cannot
tell if I am fussy, or not fussy, already eleven lines deep, and still
I have said nothing about Mars, or Japanese Ghosts, or prizes
in cereal boxes. So I sacrifice a little intensity for immensity,
trying to piece together a tower of Babel that won’t fall down.

This is not an urn of images, nor is it a proper self-portrait.
I couch-surfed for years between the ordinary and the ecstatic,
between my head’s penthouse, my heart’s studio apt, waiting
for language to unveil the lived moment. Now I have this
double-chin, wrinkles like parentheses around my blue eyes,
while the everyday and the otherworldly still duke it out in
an alley outside. The duende long stopped caring who wins.
But I do, or at least, I think I do. I’m halfway to the grave,
and yet still a boy obsessed with Jaws and great white sharks
in 1975. A starry-eyed hipster cutting across McGill to get
to a poetry workshop at Concordia in the 90s. An alcoholic
shivering, sweating in bed…does it even matter when? Caring
what other people think is one of my deep interior fears. Take
this as insurance, send it to the papers, if ever I disappear.

My first poetry love affair was Al Purdy, then Gwendolyn MacEwen,
both taught in my intro-to-Canadian poetry class, Gwen already dead
two years from trying to quit alcohol without medically detoxing, so
I had to take her voice out on record from the reserve desk in the library,
to hear her read poems like The Red Bird You Wait For, Manzini:
Escape Artist, Dark Pines Underwater, her work already newly minted
Canadian classics. I read her opus by undertaking an independent reading
course. Even read the novels Julian The Magician and King of Egypt,
King of Dreams. I would listen to her voice on record, then stare into
her kohl-blackened eyes, thinking about those poems in her last book,
Afterworlds, ones about the Tao of Physics. Purdy was still alive, giving
readings. A friend interviewed Purdy who rowed my friend onto a pond,
made him drink beer because the doctor told Purdy he couldn’t anymore.
Now they’re all dead. Their voices just this spooky action at a distance. 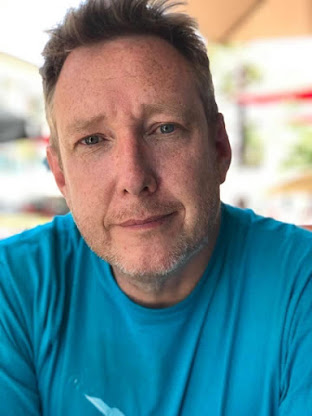 Chris Banks is a Canadian poet and author of six collections of poems, most recently Deepfake Serenade out in October with Nightwood Editions (Fall 2021). His first full-length collection, Bonfires, was awarded the Jack Chalmers Award for poetry by the Canadian Authors’ Association in 2004. Bonfires was also a finalist for the Gerald Lampert Award for best first book of poetry in Canada.  His poetry has appeared in The New Quarterly, Arc Magazine, The Antigonish Review, Event, The Malahat Review, GRIFFEL, American Poetry Journal, Prism International, among other publications. He lives and writes in Waterloo, Ontario.