Patrick James Dunagan : How Proust Ruined my life & Other Essays, by Gloria Frym

How Proust Ruined my life & Other Essays, Gloria Frym
Blazevox, 2020 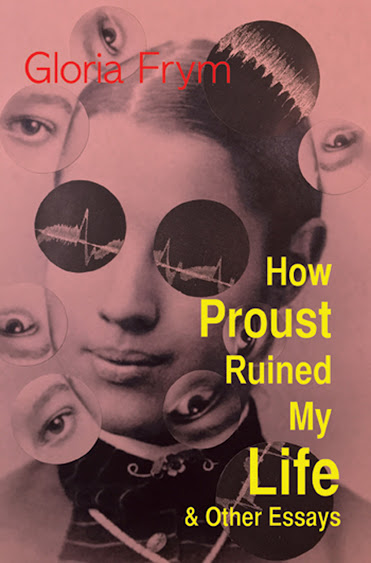 Having studied Poetics under Gloria Frym at New College of California gives me some ready familiarity with many of the essays included in How Proust Ruined My Life & Other Essays. Not that I by any means had previously read much of the work. I did however soak up everything she had to offer whether in workshopish classes such as “Lyric Strategies” (from Sappho to Wordsworth and Coleridge’s Lyrical Ballads on up to work by fellow Poetics faculty such as Tom Clark) or seminars on the likes of Walt Whitman and those poets influenced by him (Jack Spicer notably being one). She also served as my ‘official’ advisor and signed off on both my theses (MA and MFA). In addition, she includes several essays based upon class lectures, although none appear to have been originally delivered at New College, they often bleed over into remarks she did make during Poetics classes. This includes “Recombinatory Poetics: The Poem in Prose” which I had the pleasure of overseeing included in the recent anthology Roots and Routes: Poetics at New College of California edited by Dunagan, Lazzara, Whittington (Vernon Press) prior to its appearance here.

I have long found my own tendencies as a poet more or less aligned with Frym’s. When she asserts, “To read and to engage in the created world is to partake in the architecture, the ordering, the shaping, the form that nourishes us as humans and gives us meaning.” (“A Habit of Reading” 43) I recall my fondness for reiterating: reading is writing just as writing is reading. We seek discover our own senses as defined by our capabilities in relation to these two joined so often for poets seemingly inseparable activities. Who are we? What do we believe in? What is it we do with our lives? Addressing these questions—though never necessarily answering them—is in part the ongoing work of the poet.

Ready dedication to belief in such practice is evident in Frym’s “Posthumous” that withholds the identity of her tribute-subject—short prose extraordinaire Lucia Berlin—until its closing yet throughout manages intimate assessment of a meaningful relationship:

“she’d read everything. Once I visited her grave. It was emotional because she is buried next to a great poet, her own mentor and advocate. We’re literary family, in some way. And I want to say to her, you were so right about so many things that I sometimes dismissed as old-fashioned! She was a generation older, after all, didn’t believe in “quality time” with your kids, didn’t believe entertaining them, always wrote thank-you notes by hand, loved moving and re-decorating, hated orangey-yellow flowers, loved fuchsia and high heels and bright pink lipstick and expensive perfume, Coco by Chanel, eyebrow pencil, settees, pancake make-up, Elmore Leonard and Anthony Trollope.” (179)

(If there is curious interest, Berlin’s grave is located in Boulder near the Naropa campus and the poet Ed Dorn’s grave lies beside hers. It is quite the worthwhile pilgrimage.)

Close associations to other notable poets remain prominent throughout. From Allen Ginsberg’s knees, “The image of the most famous poet in America wearing shorts on a summer’s day is framed forever for me like an autograph.” (172) to her address at Robert Creeley’s San Francisco memorial, “His poems influence, never dictate (form) or duplicate. They are a constant teacher of words, unadorned, no makeup, no jewels at their throats.” (163) and her laudatory assessment of New College Poetics colleague David Meltzer, “He’s a scholar of everything that’s interesting and makes everything that isn’t rise to his occasion just by speaking of it.” (166) However, her investment in her own reading and accompanying writing pursuits remains everywhere prevalent.

Frym’s sense of the importance of having both awareness and ownership over one’s historical poetic lineage prominently rises up in “Lorine Niedecker’s Plain (Language)” when she lightly yet decisively rakes Louis Zukofsky and William Carlos Williams over the coals for their much too easy assessment of Niedecker as the Emily Dickinson of their era:

“Niedecker’s diction and syntax are plain and simple, deriving from her desire to condense the poem into a spare, intense, brief object. As we can see from most of Dickinson’s mature work, while her poems are intense, her syntax is complex and laced with exotic diction.

Perhaps it is the sense of condensation that struck Zukofsky and Williams; perhaps they had not read their Emily Dickinson quite so well, confusing the subtle differences between compression and condensation, which is somewhat akin to misidentifying perfume as essence.” (65)

Denying that there be left any question as to her position, Frym asserts, “Niedecker and Dickinson are oranges and apples.” (65) This is a poet’s handbook entry on rendering judgement upon the past insufficiencies concerning the faulty discernments of one’s masters. She maintains such lucid explication of her position throughout all these pieces.

Encouraging poets retain accountability for what they write Frym urges a custodial responsibility in relation to society. Despite the challenges of consumer-driven expectations, solipsistic navel gazing is not what a poetic calling should be all about and Frym will not have it. She reminds us:

“To witness and declare accurately, truthfully—these have always been the jobs of the poets. Always!!! In a country with so little memory, little recorded and so much distorted history, we have come to label our poetic acts as political. They are political because they directly counter the public myth and attempt to offer a private, more accurate version of history.” (“Poetics After the Millenium”185)

Never forget that poets are seers. They look beyond the ken of current times. There are no limits to what a poem accomplishes simply by existing. Of course, this is never easy. As Frym continues to note, “Poets, like any other citizen, have to resist amnesia and corporatism, which is sameness in the end, in spite of the many products it appears offer. Poets also have to resist the fatigue that ensues from such resistance.” (186) Poets of the future should take away from Frym’s essays the encouragement that is proper coming from a teacher. Namely, be aware, be opinionated, and do not hold back. Write the stuff you want to read (David Meltzer), that you need to read, that bears repeated re-readings, don’t stop and don’t look back (too much). Onward! 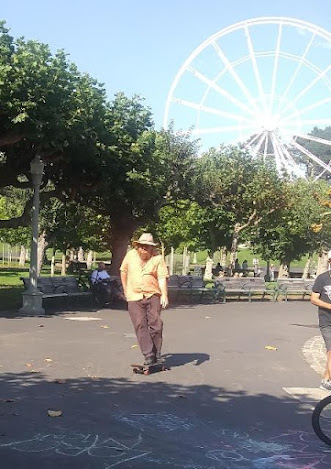 Patrick James Dunagan lives in San Francisco and works at Gleeson Library for the University of San Francisco. A graduate of the Poetics program at the now-defunct New College of California he edited Roots and Routes: Poetics at New College of California, eds. Patrick James Dunagan, Marina Lazzara, Nicholas James Whittington (Vernon Press) an anthology of critical writings by Poetics program alumni and faculty. Recent books include: “There are people who think that painters shouldn't talk”: A Gustonbook (Post Apollo), Das Gedichtete (Ugly Duckling), from Book of Kings (Bird and Beckett Books), Drops of Rain / Drops of Wine (Spuyten Duyvil), The Duncan Era: One Reader's Cosmology (Spuyten Duyvil), and Sketch of the Artist (fsmbw).