Perhaps it is because we live in a time of so many unknowns that now, more than ever, gives a call for our opus to become an adventure that flings open portals for vision and knowledge.

In this open place, remembering and imagination draw back from harsh borders where each abruptly ‘ends’ and the other ‘begins.’ The present knows itself to be shaped by pasts and futures even as it emerges with them. Pasts and futures have knowledge for those inhabiting the present even as denizens of the present are responsible to them.

The task of reimagining and reconstructing pasts is not a tertiary one in the palimpsestic present. It is necessary so that futures may grow strong roots. The past shows the future its sharp glistening hunger—and healing futures nourish the hunger of the past. Past as ancestral memory sends visions of healing into the future. Futures are continually being shaped by pasts—just as the pasts are being reshaped and reimagined to open up futures before us.

The entanglement of pasts and futures in visionary perception reveals linearity as but a flickering moleculate—a link.

Inhabiting this fluid realm becomes possible as a result of our capacity to imagine. Imagination allows reality to become more than the density of reality determined by dominant perception.

In contrast, the dominant mode of Cartesian-Newtonian dualisms conscripts our inner/outer movements into boxes or categories. Colonization of the mind by philosophies rooted in separation teaches humans to see Earth and body, emotion and instinct and intuition, dream and vision as inferior or naïve sources of knowing. These very forces are—in the epistemological universes of people of culture—regarded as sources yielding knowledge about the full spectrum of relational human experience. “What counts as knowledge is crucially important across human cultures precisely because what counts as the known usually helps define positions within the culture on questions central to human existence on the earth,” says Jane Duran.

The loss of these other epistemes in modernity has resulted in a narrowing of our collective imagination about the Earth and each other. Our human pursuits have come to be driven by a Promethean impulse that sees itself as separate from and needing to tame nature. Diane di Prima reminds us that “the war is the war against the imagination,” and that this is a spiritual battle.

Colonialist-imperial-capitalist-patriarchal matrices have always known it is our forgetting that will establish their sway. What we forget we are in relation to becomes vulnerable to being exploited or razed down. Without the remembering of interconnectedness, binary modes play into a politics of disenfranchisement, of dislocation.

Disconnection is an age-old tactic for inducing traumas practiced by systems of domination.

Then, reconnecting ourselves to vision and imagination becomes a political act. By extending ourselves in a stance of openness and radical hospitability to sources whose knowing (of life) has been silenced, marginalized, or invisible, we assert that we will no longer endorse the tactic of disconnection—or our own alienation.

In Gloria Anzaldúa’s telling, Coyolxauhqui will not stay fragmented: her very fragments are filled with a desire for connection, reconstitution, healing. Imagination is key to her processes of integration. “You use your imagination in mediating between inner and outer experience,”­ says Anzaldúa. After Coyolxauhqui dismantles her old body/self, she re-composes a new body/self whose connective sutures hold nodes of new insights and possibilities for connection.

When bodies dream—bodies made of seeds and grains and sun and rain and dung—when this dreaming begins to speak—it exposes the subskeletal connections to life, to all of reality. What has been broken begins to link to each other: to heal.

We dream so that the yet unrecognized may come into being. We slip out of the stranglehold of dominant reality and weave a reality from the fibrils of our dreams.

Dreams and visions move us out of collective amnesia. They are the dark matter that allows reality to shift. They emerge from precisely the fissures structures of domination do not understand. Their very process is alchemical.

The dissolution, re-membering, fluidity of becoming we encounter in visionary space can transform every aspect of our lives. Visionary imaginary takes us beyond the hegemony of modern/colonial pregivens to usher processes of decoloniality. As adrienne maree brown puts it, “Our radical imagination is a tool for decolonization, for reclaiming our right to shape our lived reality.”

Making the future asks of us willingness to cross the threshold between visions and reality—nimbleness—uncontainability.

This crossing is familiar, in a way, to artists. Dreaming and artmaking have much in common. “Working at art is so much like dreaming, sometimes I don’t know which is which,” says Denise Levertov. “True poetry,” says Cesaire, appeals to the unconscious—“the receptacle of kinship that, originally, united us with nature.” Thus in its shaded tongue “modest, secret” visionary truths can come forth.

Remembering and imagination are modes of seeing.

Seeing entangles us—we can no longer be on the outside looking in upon the spectacle of the real. Seeing, we acquire the power to transform it. Visioning is very much a relational mode. The visioning mode plucks us out of the mode of epistemic dependence that the dominator paradigm promotes. Taking full responsibility for what we see—through remembrance and imagination—transforms us into sovereign beings.

The step that comes after is trusting what the vision is pointing to and taking pragmatic action. As Patricia Hill Collins reminds us, “the functionality and not just the logical consistency of visionary thinking determines its worth.” Actions link our visions to the ongoing struggle of transforming reality.

The failure of the reality we live in is an ask upon us. Creating a different reality for ourselves, our children, ancestors, civet and trees and oysters and oceans is our task.

Will we, then? Forge real relationships with extraordinary dimensions—with ecological realms or agency—storehouses of memory and visionary futures?

Will we risk univocity and rational stakes—fluency and cognicentrism—guardedness and certainty?

Will we proliferate beyond our own knowing, ego’s conceit?

Will we pay attention to the ancestors?

Will we speak from our hooded bodies, speak with stones—sibyl in frequencies such that speech swells and spills outsides the spectrum of normality?

Will we light ourselves with our visions, prophesize the worlds we most want to see? 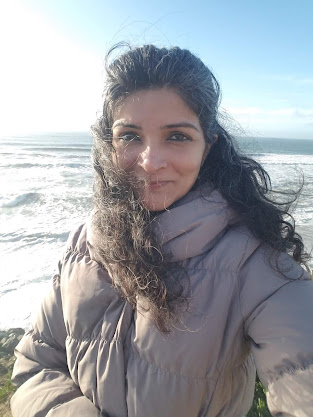 Monica Mody is a poet and feminist scholar from India who currently lives in Yelamu, San Francisco. She has a chapbook, Ordinary Annals, forthcoming from above/ground press soon. Visit her website at www.drmonicamody.com.