the sky is veiled black.

Who, still alive and still
living in Bushwick, sees Vita
or Vito? Or William Vito? Or Vito William,
newborn? Out
of the womb and out
of the neighborhood. It must be that
some very old ones
see them still, somehow.

There are factory jobs to attract (im)migrants
to the city. Nothing truly changes. I stand
in front of the building that my ancestors live in
and now people live there as people have for a century
and more people live there before that building is there.
Mineral and earth mold into each brick of this building.
Hands (whose?) touch each one. Buy and sell each one.
We believe.
There is Woodhull Hospital now
and that is an interruption. But people
are always getting sick or asthmatic or injured. People always die

and may stay. Vito and Vita lose three babies.
My mother uses the word “perished.”
Then Vita dies when my grandfather is quite young.
Then my grandfather’s wife dies when my mom is quite young.
That’s her mother who dies, the loss of her life.
She clamps down her teeth, leaks blood.
As of this (gone) moment, my mother is seventy-three years old and I am thirty-seven years old.
Her tongue still shapes like a mitten.

Where the sky can clear, when clear

Try via sky via sea
but can’t refill my mouth
with lost dialect.
Can’t be new. Nothing new.
Surely my ancestors’ antecessors
travel,  change
words that always exist
in Persia, in Egypt.

This quarter-inch of privilege. This skin
sunning on a rooftop near Avola on the southern coast of Sicily
drinking juice of wide green lemons picked in the yard,
salting the water the salt needed in that heat.
Gazing at something new, this rocky busted road.
Not new. The furniture I lay on is Ikea. The sea I swim in:
Mediterranean or Ionian. There’s no clear border. 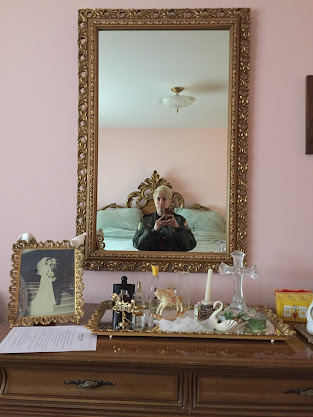 Emily Brandt is the author of the poetry collection Falsehood (After Hours Editions), as well as three chapbooks. She's a co-founding editor of No, Dear, curator of the LINEAGE reading series at Wendy’s Subway, and visionary at landscape.fm. She’s of Sicilian, Polish & Ukrainian descent, and lives in Brooklyn.