Dessa Bayrock : Conyer Clayton and the Voice of Apocalypse 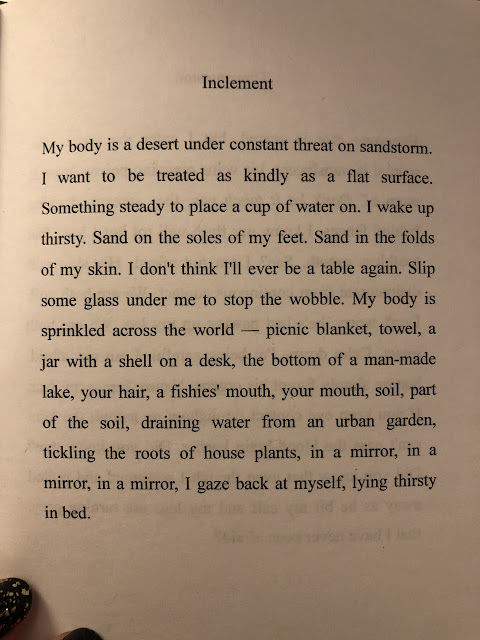 Conyer Clayton’s chapbook Trust Only the Beasts in the Water (above/ground press, 2019) is an account of the poet’s dreams, rife and rippling with the unsettling confusion and nonsensical-sense-making which power the strange logics of any dream world. Clayton underscores this in her beautiful and unsettling path between and betwixt dreams in this chapbook, presenting the reader and studier of these poems with a journey through distortion and revelation.

And, in many ways, these poems are as much about revelation as they are about dreams – both the revelation of meaning, and Revelation in a more biblical sense. Literary apocalypse theory dictates that the world is—or will be— divided into two groups, both of which we see clearly in Clayton’s work: the elect and the non-elect (Goldman 10). In layman’s terms: the worthy will be chosen to survive, and the unworthy will be sacrificed in order for true utopia to be created. Many celebrated literary works study this divide, both explicitly and implicitly: we might think here of the Bible (in which the unworthy are repeatedly sacrificed, as in the great flood, in order to build a new world for those chosen by God), or Lord of the Rings (in which the undesirable must be vanquished in order for peace and prosperity to reign for those able and willing to build a successful, utopian community).

And yet this narrative is, as many have pointed out, simplistic at best and vitally dangerous at worst; after all, genocide has long been conducted in the name of utopia. Perhaps unsurprisingly, we begin to run into trouble with apocalypse once we leave the Bible behind: without God to explicitly separate the good from the evil, the redeemable from the irredeemable, the categories of elect and non-elect— who deserves to live and who doesn’t— become dangerously muddied and subject to petty human biases and bigotry.

What Clayton presents in this chapbook, then, is a series of poems about dreams, yes, but also a classic anti-apocalyptic narrative: a perspective from the side of those in power who seek to hunt, erase, or expel the non-elect—or, at least, those they deem unworthy—from the overarching utopian framework. And yet, as the speaker of Clayton’s dream poems races away from danger and those who seek to harm or stop her, she becomes dangerous in turn: a strident voice in the darkness which resists easy classification and demands a more complex solution to revelation.

This lesson is perhaps no clearer than in the penultimate poem of the collection, titled “Inclement”, in which the narrator inhabits a difficult cognitive divide: she sees both her own worthiness, indelible in her desire “to be treated as kindly as a flat surface”, and the precariousness put upon her by the perspective of the elect, and which she rightly sees as an attack which recasts her body as “a desert under constant threat of sandstorm”.

As the poem — and the apocalypse — progresses, this threat does indeed transform into the destruction feared by the narrator, as her body turns to sand and begins to flake and scatter. At first, this sand merely exists in proximity to the narrator — “on the soles of [her] feet” and “in the folds of [her skin]” — mimicking the way in which the perspective of the elect, who seek her destruction, place their expectations and desires on her body. Quickly, however, the narrator herself transcends metonymy and inhabits the metaphor — herself becoming sand, and therefore realizing the “constant threat of sandstorm” that she so fears.

However, our narrator importantly and poignantly accepts her own dissolution and destruction through this apocalyptic violence, describing her body as divided and “sprinkled across the world — picnic blanket, towel, a jar with a shell on a desk, the bottom of a man-made lake, your hair, a fishies’ mouth, your mouth, soil, part of the soil, draining water from an urban garden, tickling the roots of house plants, in a mirror”. In short: the violence of the apocalypse turns the non-elect narrator to sand, destroying and scattering her in order to pave the way for the elect to build and subsequently inhabit their idealized utopia.

While the narrator does, indeed, seem to be destroyed— disintegrated and cast into far-flung and disparate locations, as was the ancient Egyptian god Osiris at his death— her destruction instead proves the possibility of resisting and overturning the seemingly inexorable progress of apocalypse. She is divided and the pieces of herself are separated, yes, but into places which the newfound sand of herself is seen as useful, nostalgic, or necessary. Even seemingly destroyed, Clayton seems to say, the bodies of the non-elect will be impossible to remove from utopia entirely, and will instead remain necessary to its continued prosperity. That which the elect seek to destroy will, instead, remain ironically vital to their continued success.

And, as we see with the poem’s conclusion, perhaps this destruction is as cyclical as the apocalypse itself. The last named resting place for the narrator’s body is repeated to the reader like a mantra: “in a mirror, in a mirror, in a mirror”. The narrator is both the sand which melts to form the perfect reflective surface and the body reflected within it: a doubled interiority which strengthens the narrator’s position of resistance and excises her from the apocalyptic narrative. A body becomes sand, which becomes the vessel for the reflection of a body, which is finally, gratefully, allowed to “gaze back at [herself], lying thirsty in bed.”

This thirst — a desire perhaps more human than any other — concludes the poem, echoing the narrator’s similar desire for care in her wish “to be treated kindly”, to become “something steady”. This thirst — for water and therefore for self-sustainability, for care — floats through the poem, from the “desert” and “sandstorm” of the first line to the centre image of “draining water from an urban garden”. Our narrator is acquainted with thirst, yes, and with the constraining expectations placed upon her by both herself and by the biased and destructive view of the elect. In the end, however, it is not thirst which defines her, but rather the mirror — the object which she creates precisely through her destruction, and in which she steadfastly gazes at herself, constructs herself, and centres herself once more as a human being who refuses to be broken down for the good of the empire. 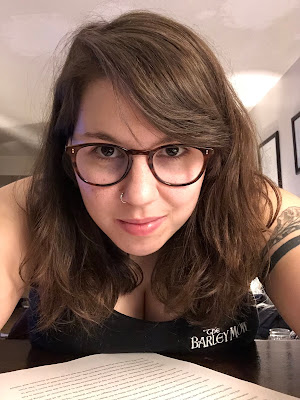 Dessa Bayrock lives in Ottawa with two cats and a variety of succulents, one of which occasionally blooms. She used to fold and unfold paper for a living at Library and Archives Canada, and is currently a PhD student in English, where she continues to fold and unfold paper. Her work has appeared in Funicular, PRISM, and Poetry Is Dead, among others, and her work was recently shortlisted for the Metatron Prize for Rising Authors. She is the editor of post ghost press. You can find her, or at least more about her, at dessabayrock.com, or on Twitter at @yodessa.