rob mclennan : Immune To The Sacred, by Stephen Brockwell 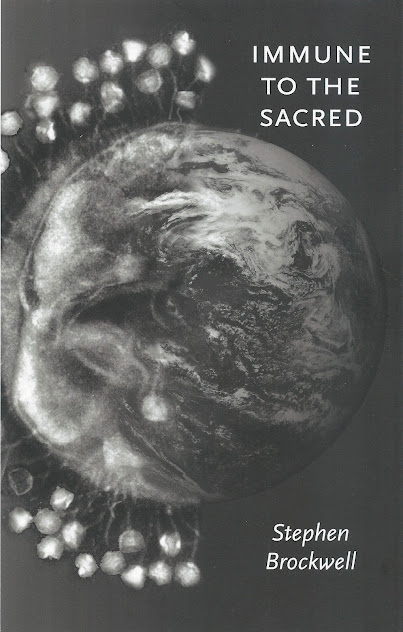 The latest from Ottawa poet and editor Stephen Brockwell is the full-length Immune To The Sacred (Mansfield Press, 2022), his seventh full-length poetry collection overall, following The Wire in Fences (Balmuir Poetry Series, 1988), Cometology (ECW Press, 2001), Fruitfly Geographic (ECW Press, 2004), The Real Made Up (ECW Press, 2007), Complete Surprising Fragments of Impossible Books (Mansfield Press, 2013) and All of Us, Reticent, Here, Together (Mansfield Press, 2016), as well as numerous chapbooks. Composed as contained bursts of passionate deduction, Brockwell’s lyric theses offer a scientific approach, one that seeks out the promise of pure facts, yet hold a high regard for the possibility of wonder. “Look,” he writes, to open the poem “MIRACLES OF THE SACRED REPLACEMENTS,” “my terrier puppy bears wings. / Each morning, my tabby sings arias for kibble.” His is a lyric simultaneously aware of both the lyric complexities and possibilities of corporate-speak, and how, as his late mentor, the poet Peter Van Toorn once wrote (Brockwell offers a dedication to Van Toorn at the end of the book’s acknowledgments), “you can smell the poem in a thing for miles.” Despite this, Brockwell’s lyric holds a discomfort, one fully self-aware, as though he ponders this unique placement and perspective, with a foot each in two worlds of perceived separate thinking, each of which consider the other utterly foreign. Instead, through Brockwell, the two sides appear intricately connected: if one is to think through language, after all, there will always be an opening into and through poetry. As he writes to open the poem “CEILING”:

For corporate folk with experience
it was like a call on a bond that had maxed,
or, for yokels you aren’t familiar with such parlance,
a doghouse ceiling for the dog that won’t hunt,

or, maybe, the inside top of a can of beans
that a living thing briefly tried to leave.

His attempts at folksy parlance don’t necessarily present themselves with the ease of tone required, but there’s a way Brockwell offers a directness that turns expectation slightly askew, almost a way of turning a line into or away from the light, allowing poems to sparkle, seemingly suddenly, and out of the blue. “If you think the clouds are water,” he offers, to open the poem “INCOMPLETE UNDERSTANDING OF CLOUDS,” “it’s been too long since you / sprawled on the summer grass // and called to them, as you watched / seagulls fly under their beards— / or sun-cloud skirts if you prefer.” Through Immune To The Sacred, as with much of his prior work, his is an unironic earnestness, something his work shares with the late Kingston, Ontario poet Steven Heighton, or Houston, Texas-based poet Hayan Charara, offering genuine empathy amid his ongoing study of human effects and natural beauty, even as he plays with and against such expectation. “No ice cream on this planet,” the poem “NO SOLICITING” ends, “is as delicious as privacy.”

Whereas his prior few collections leaned further into explorations of voice and character, Immune To The Sacred leans into a kind of observational wonder paired with humanity’s increasing amplitude toward self-destruction, offering poems composed around investigation and response, anxiety and grief, while ever seeking to find a light through the dark that might otherwise be missed. As he writes to end the poem “VINTNER IN SPRINGTIME,” offering a description of clay cups and the farming of grapes, and the intimate purity of working with one’s hands: “Soiled human hands / make beautiful things.” His is a carved and considered beauty, one often sparked through the ability to remain open to new ways of thinking, seeing and observing.

Through Immune To The Sacred, Brockwell’s poems have shifted from one seeking to articulate the artifice, as well as the shaped perceptions, of cultural and intellectual constructions, into a lyric engaged with attempting to get, finally, at and into the root of a lived engagement with the world as it is. To open the poem “WHY YOU CAN’T HAVE BEAUTIFUL THINGS,” he offers: “Here is a beautiful thing: a cuttlefish tattoos itself the mottle / sepia of the reef. // Here is a beautiful thing: the tardigrade clambers up a / ladder of algae.” As he spoke of the project, then still in-progress, in a recent interview at Touch the Donkey:

Maybe one more thing. I find it dispiriting (I am overusing that word these days) that we—many of the members of our species—are immune to certain sacred, essential things (the bodies and spirits of others, this delicate planet) and simultaneously too easily infected by ideas and beliefs our culture makes sacred: evangelical faith and the faith in human instrumental reason. That’s the orbit the book has gravitated into.

The deceptive straightforwardness of his lyric belies an awareness itself of its own construction, as Brockwell offers his thoughts on border crossings, trees and social media, the work of Cobourg poet Stuart Ross and even declassified nuclear tests. Set as a thread through the collection, this new work includes eight poems in his “STILL FROM DECLASSIFIED NUCLEAR TEST FILM” series, connecting this collection to concerns around human-prompted ecological disaster he offered through his chapbook Images from Declassified Nuclear Test Films (above/ground press, 2014), the poems from which subsequently appeared into the collection prior to this current volume, All of Us, Reticent, Here, Together. “And of the trees, / what survives?” he asks, to close out “STILL FROM DECLASSIFIED NUCLEAR TEST FILM: / LET’S FACE IT,” “Matchsticks can’t make / survival / as beautiful as a sunset. // There are no creams / for alpha particles.” He writes on nuclear tests and migrant children, commenting on social justice and the so-called “Freedom Convoy” that rolled into downtown Ottawa earlier this year, mere blocks away from his front door, attempting to hold on to the beauty of small moments despite the brutality of self-deluded human self-destruction. “Tell me,” he writes, to close the poem “LASER SCANNING PSALM,” “before I drink myself to death, if the sky is falling.” And yet, throughout Brockwell’s clear view of the world as it currently stands, it would be difficult to not see this collection as an optimistic one, offering the contemporary state of the world through a Schrödinger’s perspective: simultaneously alive and dead, until the possibility of the open door.

O bosons, fermions, and quantum fields
that brought into being this habitable world
by chance—help me understand the loaded die
of high finance our landlords cooked up
by design to cheat your inexorable chaos.
Those who turn improbability into profit thrive.
Help me thrive. Deal me an ace after this jack-
shit so I can pay my taxes and my daughter’s tuition.
Lock our cats out of Schrödinger’s box in a single state
of purring ecstasy so their fur may comfort me
when my daily coin toss lands spinning on its edge.
Give these felines, incapable of evil,
independent trials of mercy at your craps table
of chaotic cellular division. Let me suffer for them. 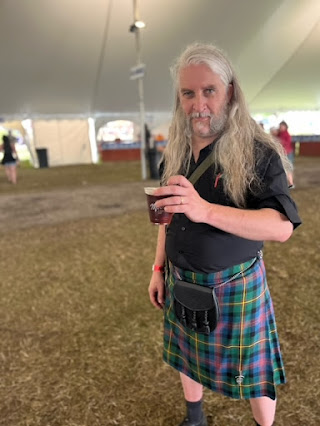 Born in Ottawa, Canada’s glorious capital city, rob mclennan currently lives in Ottawa, where he is home full-time with the two wee girls he shares with Christine McNair. The author of more than thirty trade books of poetry, fiction and non-fiction, his most recent titles include the poetry collection the book of smaller (University of Calgary Press, 2022), and a suite of pandemic essays, essays in the face of uncertainties (Mansfield Press, 2022). He is is currently pushing to complete (or at least further) a novel this summer (as his household allows). He spent the 2007-8 academic year in Edmonton as writer-in-residence at the University of Alberta, and regularly posts reviews, essays, interviews and other notices at robmclennan.blogspot.com