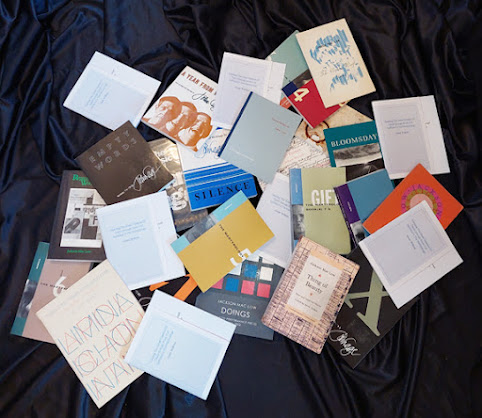 Reading The Great Classics Of Canlit through Book 5 of bpNichol’s The Martyrology is part of a series of non-intentional process-based treatments of The Martyrology that I began in 2014.

I first started experimenting with chance, indeterminate and non-intentional techniques in the 20-oughts, largely inspired by bpNichol’s brilliant Translating Translating Apollinaire. My interest in these kinds of forms properly crystalized a few years later, when my participation in the literary responses to several of visual artist Michèle Provost’s exhibitions gave me the opportunity to investigate and to apply these kinds of techniques on a broader scale.

By then I’d also taken part in several iterations of jwcurry’s ongoing “Messagio Galore” project, which, amongst other things, gave me a granular-level exposure to the writing of John Cage. All of this led me to dig further into Cage’s poetics, which in turn led me to Jackson Mac Low… so it was through the window that these three writers (Nichol, Cage and Mac Low) opened that I really jumped into the process work that has become the main line of my poetic output.

In exploring this mode – or maybe this field of modes – I was particularly struck by Cage and Mac Low’s interesting treatments of the works of other writers: Cage riffed on Henry David Thoreau, Mac Low mined Virginia Woolf, and both of them took runs at James Joyce and Ezra Pound.

Anyway, I’d gotten as far as pondering how something similar might be done with The Martyrology when Sandra Ridley – who was then guest-editing Book*hug’s BafterC journal – asked if I had anything to contribute to the next issue. The deadline was a little ways off when she asked, so this turned out to be exactly the sort of motivation I needed.

It took me several tries at Book 1 before I came up with an approach that seemed to work, and gave me results I thought were interesting. Sandra did put the poem in BafterC too – and all of this was enough encouragement that since then, I’ve worked my way through most of The Martyrology, with only Book 9 left to go.

The approach I’ve been using through the project is based on Jackson Mac Low’s version of the “diastic” reading-through of a subject text. The basic process involves starting with an “index” word or line, and essentially using it as a lexical sieve to sort words and phrases out of a subject text. If you use the word “poetry,” for instance, you’d start reading from the beginning of your subject text until you encountered the first word starting with the letter “p”. You’d then continue on through the text until you found a word in which the second letter was “o”, and then on to the first word in which the third letter was “e”… etc.

There are a lot of rules you can apply to this process, and a lot of compositional elements you need to sort out before you start. I typically only take lexically significant words, and I try to avoid repetition. But how far do you let yourself read through the subject text without finding a match? Do you just take the one matching word, or do you take the “wing words” – the word or words on either side of the matching word – or do you take the whole line, the whole sentence? You can work chance into this as well, and use dice or some other randomizing method to determine the starting point in the text for each search.

Anyway, this project turned out to be the perfect way for me to investigate the field of “process” in detail, and it opened up a lot of different avenues that I’m still exploring. As I said, I’m pretty much exclusively a process poet now: everything I write is based in some manner on a pre-existing text or texts – either something someone else has written, or something that I have somehow collected or selected. I still often use various versions of the diastic method, as well as versions & combinations of Cage and Mac Low’s other chance and non-intentional forms… in addition to still having a soft spot for Nichol’s text/letter/sound sorting & ordering/reordering methods.

All of this has led me on to the less mechanical methods of processing, arranging & translating texts used by other writers. I definitely see some of Erin Moure’s work as being processual in a way, and M Nourbese Philip, Caroline Bergvall and Lisa Robertson each do really interesting things that seem to fall into, or at least next to, this ballpark.

I find poetry as process – or process as poetry – an especially appealing form of writing as, to paraphrase John Cage, I really have nothing in particular I want to say, and this gives me a way of saying it.

While I very much admire poets who can crystalize a moment into verse or who can observe a slice of life or a figment of nature as it goes by and translate it into a few (or many) lines – I don’t, can’t, and never have had much interest in doing this sort of thing myself. What I do like to do is to find an interesting text (or texts), apply a process to it, and let the resulting combination of words, letters and chance generate a new text or a new image. It’s like you’re discovering a new poem or a new arrangement of words and ideas that have been there all along, hiding in plain sight. 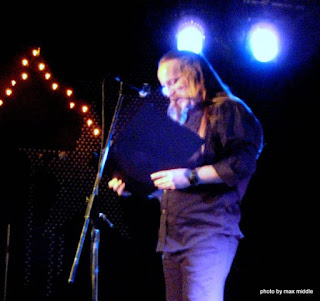 Grant Wilkins is a printer, papermaker and occasional poet from Ottawa who has made a practice of doing strange things to other people’s words. He has degrees in History & Classical Civilization and in English, and he likes ink, metal, paper, letters, sounds and words, and combinations thereof.