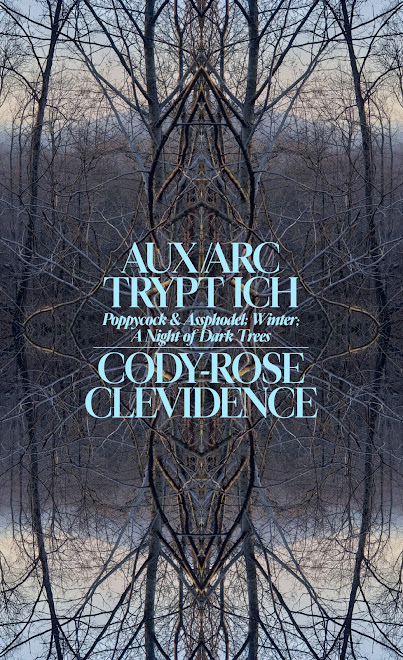 Continuing an ecopoetic of collage established through their collections BEAST FEAST (Ahsahta Press, 2014), Flung/ Throne (Ahsahta Press, 2017) and “Listen My Friend, This is the Dream I Dreamed Last Night” (The Song Cave, 2021), the latest from Arkansas Ozarks poet Cody-Rose Clevidence is AUX/ARC TRYPT ICH: Poppycock & Assphodel; Winter; A Night of Dark Trees (Nightboat Books, 2021), a mosaic of scraps, fragments and gestures composed across an enormous canvas. “give grief its / endless pasture,” one page offers, two-third through. The facing page, adds: “I do not accept / this bell in me [.]” There is such a magnificence and heft to Clevidence’s epic, book-length lyric, one that staggers, overlays, staccatos, flips and twists across an assemblage-suite of poems long and short that fit together perfectly. Theirs is a poetics of physical space and organic gestures, guttural speech and wilderness, descriptive patterns and narrative tethers that might appear to be tenuous, but are made of the strongest material. “gloat, more / dumb, rhyme / petite, mort / pterodactyl,” they write, towards the beginning of the collection. “blue, pfhhh / geyser, spy, / arkedelphia / lazy, eye // unshamed, sun / thoughts, sensations / goat, boat / sudden, come [.]” Clevidence’s polyphonic gestures could draw comparisons to the late Toronto poet bpNichol’s multiple-volume The Martyrology, but with an electrified sense of fragmentation and layering, or Toronto poet MLA Chernoff’s theory-jumble, blended with a foundation of ecopoetic.

it was the green that took, the eye, caught
the rimmed horizon of light, that brutal
unyielding communion, shock of the surface,
shock of the deep, it was the sun came hard
in my palm on my wrist.

“I’m trying to find a workable paradigm among all th fields of / thought and desire.” they write, about two-thirds through. This collection is densely-packed, writing out desire and swagger in a condensed text akin to that of texting, writing flowers and trees: “dude about the thing it is just a thing. / about this tip of asphodel n violet. / about this whim of rhyme about / the storm the form why / is it and then why / unwieldy it so [.]” Clevidence writes perception and depiction, how we are seen and see, easing between short form and longer stretches, stitching shape and sound to form bodies of earth. Referencing, among others, George Oppen, William Shakespeare, Latin, Tennyson, saints and angels, this collection contains multitudes, exploring wilderness and language as a kind of primal space, writing morning, mourning, prayer and trees. There is just so much happening here. As they write, two-thirds through:

into th raw forest, held, as if to stave
off, th surging of th forests, dogwood
studded, restrain me, you can graze yr
eyes on mine, ok, can you, in th throes
of, throw me, can you, in th ringing
non-sense, raw chord, data abuzz,
dumped out & scattered as th light
scatters in th heart, th heat, where we
are held there in stillness, we blink in
stillness, blink once for yes, close yr
eyes against th falling, dusk, I blink
once into th darkness, & hold my
breath—

As part of their 2016 interview for Touch the Donkey, Clevidence speaks to the project, which was then still in-progress:

Q: Are you willing to talk about the larger project it is part of, “Poppycock & Assphodel”?

A: .... yes..... but, I do t know how to not be cryptic.  I’ve never been a fan of the personal lyric, I mean, if it sounds good, okay, but like, it just has always seemed to me to be a narcissistic waste of space, like the whole world and all of history and all the ideas and struggles and everything is going on around us, anyway so I hate myself for this project, and also I’m a lil prude and have always been quite private in my own self, so fuck me, here I am, out of a shit relationship that made me feel like I was starving to death, trapped in some medieval torture device, & then I’m out of it and... it was like coming back to life all of a sudden the world around me and the colors and the sensations of being were so... I don’t know so real and full of life instead of this bleak and endless pain, and well also uhm I sort of accidentally was also falling in love, w someone I wasn’t rly sposst to be but it just happens, I guess.  anyway lots of things... &maybe we can just say there's a long tradition of queer poets coalescing sexuality w/th experience of nature, or something.  Or any poets but I think queer poets especially because of... well that’s a whole other thought...Anyway so its a fucking personal lyric and I hate myself because there are really important things in this world that are way more interesting and way more pressing, but well I’m stuck here rn so.

Q: How does the work in “Poppycock & Assphodel” compare to, say, the work in BEAST FEAST?

A: Well.... it’s very different... but what happened was this.  After BF I wrote this long, v dense manuscript called FLUNG THROWN &... well I had just read John McPhee’s “Annals of a Former World” and was obsessed with the evolution of early life on earth, & flung. thrown... like I said super dense & well it felt v serious, something about the evolution of consciousness, to feel grief, my friend Amelia Jackie, The Molasses Gospel, has a line “All the pain is worth it/ all the pain is worth it/ just to have one minute/ alive”... & I was like... uhm really cuz... no.  & just something about the vastness of geologic time & to be conscious in whatever way we, as humans, are, in our human consciousness experiencing this tiny sliver of our experienceable world, for like, what, a blip in time, anyway, and also to be honest I got deep into prosody & was just rereading Hopkins, H.D. & Brathwaite, like, trying to learn, on some intimate level, their respective genius’ w regard to, like, how sonic & prosody & meaning can get wove together, anyway, like I said, it’s DENSE (I was also obsessed w this idea that like, if a book of poetry is 18$ dollars, it should... I dunno take more than 20 minutes to read, or like, I wanted, needed, to write something that felt heavy.  so Poppycock & Assphodel became sort of a minimalist jokey slough-off of shit that was too silly to get put in Flung/Thrown, sort of like a catch-all manuscript for one liner's & dick jokes, to like, shake the density out of me.  formally it’s very loose, but where BEAST FEAST isn’t as tight as I’d like it to be, in retrospect, in p&A the looseness was a foundational necessity, like, I had to walk it out or shake it off after the rigor I tried to put into F/Th. and then like I said it’s a totally narcissistic personal lyric, the scope is v close n small, somewhere between my eyeballs & th world, the lines are mostly short & turn v fast, the rhymes are goofy, & like it doesn’t have a bigger philosophical project that underlies it like both BF & F/Th (tried to) do. 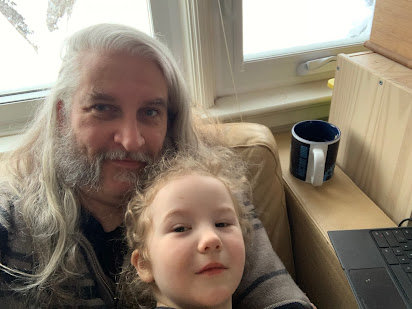 Born in Ottawa, Canada’s glorious capital city, rob mclennan currently lives in Ottawa, where he is home full-time with the two wee girls he shares with Christine McNair. His latest poetry title, the book of smaller (University of Calgary Press, 2022), is now available for pre-order, scheduled for release on May 15. He is currently working on crafting the final draft of his suite of pandemic-era essays, essays in the face of uncertainties, composed during the first three months of original lockdown, scheduled to appear this fall with Mansfield Press. Less than two weeks away from forty-twelve years old, he has decided to remain in his forties until the pandemic ends, likely entering his fifties “already in-progress.”