Although I have been writing the prose poem with focused intent for over a decade, and in fits and sparks before that, the form continues to evolve in my mind. I have worked and reworked my relationship with the prose poem, as one does with a backyard garden—what did we grow here last year and how did it do? What needs to be rotated so the soil is nourished, and what volunteers might show up bravely in the path between the beds? I’ve come to understand that I will have a long-term relationship with the prose poem; this has allowed me to relax into the form and to worry less about the form my work shows up in overall.

As a poet, the line break is super important to me—the visual and auditory work the break makes, so there’s something physical to the prose poem for me too. Once a prose poem is on the page, I adjust my box—moving the margins so that the end-of-line words, punctuation, etc., create a more pleasing visual, especially considering how the first line reads all the way across. This is often disregarded when my poems are published in literary journals and I’ve had to sort of let that go, but it is a step I take in the writing and drafting; sometimes it helps me see I’ve over used a word (usually “the”) or that all of my beads/sentences are the same size. Please see Julia Story’s book Post Moxie for an example of how the prose poem box can be used with incredible impact. And I do think of the prose poem as a stringing of beads—a long, short, long, long, short, or whatever the required rhythm pattern might be for the piece; it’s important to me to use punctuation and the size of the box of text to guide the reader as I might in a lineated poem.

I tend to start with a first image or line, or a phrase that breaks itself open to the prose poem. I’ve also learned that my prose poems are prose poems when they can’t be anything else; I can’t take a prose poem and force it into lines or the other way around. I have tried. There is something unique about what shows up for me as a prose poem. This idea is mentioned in The Rose Metal Press Field Guide to Prose Poetry, which I highly recommend as a companion to anyone interested in writing the prose poem—just in how many directions it shows as manners of approach and creation in this form.

In recent times, I’ve worked in the prose poem as a project series; it seems I like to work out an idea across multiple boxes. My 2018 chapbook put out by elsewhere magazine, Ursa Minor, is a series of prose poems that focus on two characters, the little girl and the bear. The Spoons in the Grass are There to Dig a Moat (Sarabande Books, 2016) is a weaving of threads, all in prose poems. My first chapbook, Purgatory (Black Lawrence Press, 2012, is also prose poems, here in second person and centered in discomfort. Even though I was working primarily in the prose poem for years, it took a longer while for me to get comfortable in the prose poem. In the fall of 2014, Sarabande had just accepted my book and I was attending the Kentucky Women Writers Conference where I was in a workshop led by Tracy K. Smith. One of the last activities she did was to go around the table asking each person to share a writing fear or concern. Mine was that I might never write anything but prose poems again—that was all that was coming to me at the time. Smith replied that it just seemed like I had more prose poems to write and relief rushed over me. I decided to write the prose poem, or whatever form came and try not worry that it wasn’t something else.

Now I am working on a series of feminist survival prose poems; each takes its title from a 1956 survival guide, How to Stay Alive in the Woods by Bradford Angier. I am not reading the book, but I flip it open and take the title of a section as my poem seed. Then I build the prose poem up around this bit. This project is in progress; I imagine it will become more hybrid and also include small lyric essay pieces, but I am trying now to do the work and let it grow.

All Birds Are Eatable

The impossibility of flight keeps you tucked in your bed, one arm hovers but returns to your body mid-dream. Clouds leave the sky and come down to hug the mountains; a line of wooly fog rubs right up to the green bowl of a ridge and pauses. The tension of water, its memory of drip, of each leaf’s surface, of soaking through a nest made of straw, string, the tail of a kite lost in flight. You dream a farm, chickens scatter the yard; their wings quilted patterns of gray. In their dirt scratch and cluck, the chickens are bound to Earth—a long cyclone of evolution left them behind. You ask your mother, staged behind you now, if dinosaurs could fly and she turns to her mother, now staged behind her, and asks what right anyone had to sky. And her mother turns to a pillar of feathers, of dandelion fluff, and is blown away, starting from the top.

Shopping carts scarecrow the parking lot. We choose not to listen to the news of another workplace shooting, another man who never grew a garden, never felt the sun travel all eight minutes from solar surface to solar surface; instead, a missile launched across an invisible string of zeros, from one dark screen to the sky above a collapsing building, where children nest under tarps while the air above them begins to whistle. We are tired. At any given moment, someone will tell you what a white man thinks. 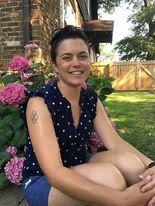 Amelia Martens is the author of The Spoons in the Grass are There To Dig a Moat (Sarabande Books, 2016), and four chapbooks. In 2019, she received an Al Smith Individual Artist Fellowship from the Kentucky Arts Council. She co-curates the Rivertown Reading Series, and two awesome daughters.