My journey into the prose poem began with the attempt to write short stories. I tried to follow the usual, but the narratives kept skidding away. Then again, the prose poem was there early. Three of my first loves were Charles Simic, James Tate, and Russell Edson. On the surreal-absurd end of the spectrum. Sometimes fabulist/fairy tales. Then later Lydia Davis and Diane Williams. All of them, in various ways, are minimalist. And that is something too. The minimalism. I am more drawn to minimalist surreal-absurd narratives. Also Jung and some smatterings of Freud. A way out of my Mormon past. Repressive impulses. I don’t know what the difference is between prose poems and micro fiction (or flash fiction). Some kind of relationship to time maybe? Prose poems more frozen in time. A snapshot. But that’s not always right. Some prose poems are narratives and time moves through them. There’s also the idea of a narrative conflict with micro and flash fiction. But prose poems can have that too. There is economy of language in poetry. Compression. That’s the ding dong bell for me. Economy of language. I am not drawn to the maximalist. I have a distrust of language. There’s too much of it. The prose poem is a rascal. The French poets were rascals in 19th/20th century. I am also drawn to rascals. In the end, I want a journey through language. A little world in there. Easy going, but then the rug pulled out. The rug is the content. And also the language.

I was inside the old electric in Katowice, rattling & humming. Everyone very serious. Kontroler, the people whispered. Some people tried to squeeze out at the next stop, but kontroler worked from the front and back. Squeezed you in the middle. There was nowhere to go. I feel the pinch in the room with the walls moving back & forth. I am being sucked into them. I try to hold my breath. Stick my neck out to keep from suffocating. Where were you going? I try to find my ticket. But there’s no ticket. Only fairy lint.

On Can Robert, Winnie held out her wiffles. Isn’t it lovely, said Winnie. It’s hard to wet your whistle in this dry paper plague mask, said Winterbottom. We’ve polluted ourselves with people, said Winnie. The trees are alright. Waves too. Dogs, mostly. Bird with bicycle. Bicycle with basket peddling fresh wiffles before sunrise. Winterbottom loved his wiffles. He put them in the freezer. For the winter deep sleep. When they emerged, he curled up in his chair with AirPods. My right ear, he thought. The wax runs deep in that ear. When I take off my AirPods, it is stuck there. Sometimes on the surface and sometimes deeper.

At the monthly meeting, they inspected their shadows. Elder Stucky was twiddling his cane. Do you see, he said, rattling the bag of shadows. At the monthly meeting, Elder Dane brought out the clippers. Let’s shave it, he said. And shave it they did. The shadows squirmed on the ceiling, then flew into the bag. Elder Stucky tried to muffle it. He couldn’t muffle it. It cackled. Is that another shadow, said Elder Dane. He brought back the hammer of god. The shadows went down. The shadows came up. They pounded the shadows into molehills. One day a large shadow emerged from the hole. It was the shadow of shadows. They couldn’t pound it. They couldn’t ignore it. It grow bigger and bigger and went into the world. So many people swallowed it. We have to watch for it. The shadow of shadows among us. 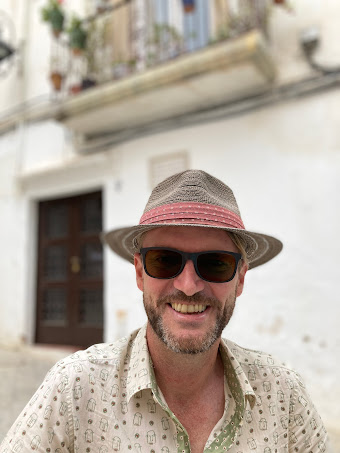 Marcus Slease is a (mostly) absurdist, surrealist and minimalist writer from Portadown, N. Ireland and Utah. He is the author of numerous books from indie and university presses, including: Puppy (Beir Bua Press), Never Mind the Beasts (Dostoyevsky Wannabe), The Green Monk (Boiler House Press), and Play Yr Kardz Right (Dostoyevsky Wannabe). He comes from a working class background and currently teaches high school in Barcelona. Find out more at: Never Mind the Beasts and follow him on Twitter @postpran