You wake up in a dark room, itching. This uncertainty feels important. Don’t look directly at it. Let it be in the dark with you. When I start writing prose poetry I don’t know where I’m going. I don’t know what I want to say. In an essay you at least have a question and some discourse, a direction. Here you don’t have that. There is a feeling, and maybe a phrase or a collection of words. A gesture which could grow a position. A scrappy thing that was in my hand when I woke up. A logos conjoining thought entities. A bag of smells, a condition of the light, an almost-remembered figure hovering over you. Each of these might be punched out like dough, stretched by writing into something that can hold more of what it is.

I did not come to prose poetry through writing more traditional, lineated poetry. I took a very long route through prose – starting out writing the most rigid newspaper journalism; through longform narrative essays; personal essays; then shorter, more experimental prose before coming to rest here at the prose poem (and adjacent hybrid in-betweenishness) where it seems like I’ve settled down. Ha! How the hell do we end up here? I don’t think prose poetry is a place anyone knowingly heads for; maybe, like Terri Windling’s Bordertown, you can only get here if you don’t know where you’re going. In the writing world, prose poetry seems like the equivalent of a rusty truck stop diner at the edge of civilization – the kind of joint that attracts some pretty odd characters.

During my trip out here there were some experiments with lineated poems, but they just haven’t felt natural to me. I think that the power and responsibility one must assume in choosing where to break a line are not forces I like the feel of in my hands. I am uneasy about the line break – it feels gimmicky, manipulative, artificial – somehow, hmmm, I don’t trust it. I admit this with some trepidation, because on each of the few occasions I’ve tried to explain my mistrust of line breaks to poet friends who use them well and love them they have appeared utterly mystified. For me, an effective line break gets between the individual and the action, like an aggressive score in a film which tells you what emotions you’re supposed to be feeling. Maybe it’s useful to think about this in terms of the Dogme 95 prohibition against non-diagetic sound; I want all of the sound to come from in here, from inside the poem. I want the people navigating it to be able to hear themselves over and against it, hear themselves in and through it. I don’t know what this sounds like to you.

The line break is a blunt instrument, like a cosh that levels too many possibilities, knocking them out cold. I prefer the possibilities of the writing to flourish and be ambiguous, to support multiple responses, interpretations and emotional valences which may oppose or contradict each other – for me, that variousness is closer to where the prose poem originates, at the intersection between inner sense and the world. That’s what living is like. And the tension, the exchange between words and phrases according to their sound and sense is what I’m interested in – it’s the engine that gives us our momentum. Break that flow too much and the writing loses all of its snapping possibility.

However… you have to pay for that power. Or, maybe, someone has to pay. An experimental prose poem requires more of the reader and some people really don’t feel comfortable with that. They show up to a poem and they just want to take it in. They don’t expect to be this involved in making it. To go back to the Dogme 95 analogy, many people prefer watching a movie with a score underpinning the emotional landscape – for them, that’s always been part of the movie experience and this feels incomplete without it. And it’s the same with line breaks, and more generally with the signposting that comes from other formal elements of traditional poetry – a lot of people like knowing what they’re supposed to feel when they read a poem or what the writer meant. I’m not saying prose poets are entirely free from these considerations. There is a need for some clarity, some narrative. Some shaping. But I think, in what I read and what I write I’m one of the people who is happiest living right out on the edge of what is needed. That’s what interests me, because that’s the most fruitful, wild place.

the only certainty is that the way will be blocked but the route changes every day and the roadblocks do too and these unknowns rotate within and without. I’m driving. Something comes up. I dig around for a possible I click on the signal. A tributary is crowned route while all the blood drains from the face of my ex but I’m already gone. Shortcut longcut backstreet dogleg open a way through this ok turn here

on the long straightaways between shifts I make landmarks, folding down the edge of the street sign bag snag shutter sheet flap I collect ways. No exit at the intersection of this and what comes up. Just know under knowing I’ll have to change my route so keep them all out on the passenger seat. Just know just not where so I need them close to pick it up turn here

they’re always ripping it up blasting holes raising cordons and tailbacks raising a clusterfuck line of reds raising a welt on the peripheral. Men at work nothing gets fixed. Nothing gets bigger the potholes eat the road surely it’s rupture they came to repair. When law’s map cuts out drive where your car will go. Considering topography considering trees or houses and the limit of your suspension considering clearance. When I was in Hazard County. Land, before our mark turn here

head out past unmade road, unnamed road to a clanking point caught in the act of crossing space, a lonesome vector whistling in my teeth. I’m jumping the General Lee over a creek and there’s joy in the collapse of a rotten order. That’s a way. Throw it on the seat next to risk, vigilance, exhaust. I’m always driving. When I sleep I navigate dream cities. Get lost every night to practice losing my way and finding it again like I found you. If I can’t pick you up you’re either obstacle or way so which is it. I can let it idle for a minute but

she is almost crying when she wakes me because she knows I need the sleep my (illegible) the creak of door foot on step I deep asleep half asleep dragged out and I want to be (illegible) for her but this is the second or third time I’ve been pulled awake to take (illegible) the last time all she wanted was milk you get good at changing nappies this time she needs more silly sweet (illegible) about bears or calm talk of strategies and alternatives, what she can do instead of sleep or locating a game a phantom pain in the stomach the light’s making her feel weird mouth sores blocked nose too hot cold matching bodies to mine. This is the edge of (illegible) wanting her to wake me every time for the thought of my child crying alone is too much to bear but not wanting her to wake me because I know when it’s over she will be asleep but I will be awake (illegible) and being (illegible) (illegible) sandy eyed and aching 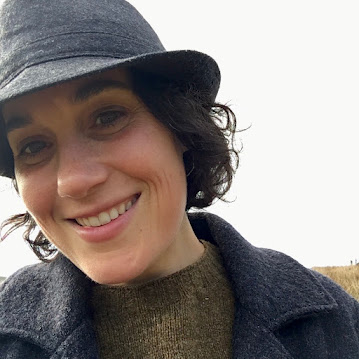 Kate Feld is a writer who grew up in in the U.S. state of Vermont and now lives outside Manchester, UK. She writes poetry, short fiction, essays and prose that sits between forms. Her writing explores the natural world, mythology and the unconscious, often taking the form of lyric narratives that both interrogate and celebrate lived experience. Her work has been published widely in journals and anthologies including The Stinging Fly, The Letters Page and Hotel. She lectures in journalism at the University of Salford.