Calgary poet and editor Helen Hajnoczky’s third full-length poetry title, after Magyarázni (Toronto ON: Coach House Books, 2016) and Poets and Killers: A Life in Advertising (Montreal QC: Snare Books, 2010), is Frost & Pollen (Picton ON: Invisible Publishing, 2021), a book constructed as a pair of prose poem suites, “Bloom & Martyr” and “Foliage.” The paired suites are constructed out of untitled, short sections, composed with a wonderful lyric flourish and flow driven by a texture of gymnastic sound and cadence. Originally produced as a letterpress chapbook in an edition of fifty copies in 2016 by Vernon, British Columbia publisher Kalamalka Press as part of winning the 2015 John Lent Poetry-Prose Award, “Bloom & Martyr” is a suite of sixty-one untitled prose poems composed via a lyric of sensual flow, ache, sorrow and desire. Hajnoczky eases in and through language, unfurling sound and motion to propel her swells and eddys:

Your blush, my chrysanthemum. Your winter frost,
dahlia and molten. My shoulder blades, raspberry and
tarnish. Your breath, bloom and hemlock. Your frost,
your flush, cold blossom, my mouth. 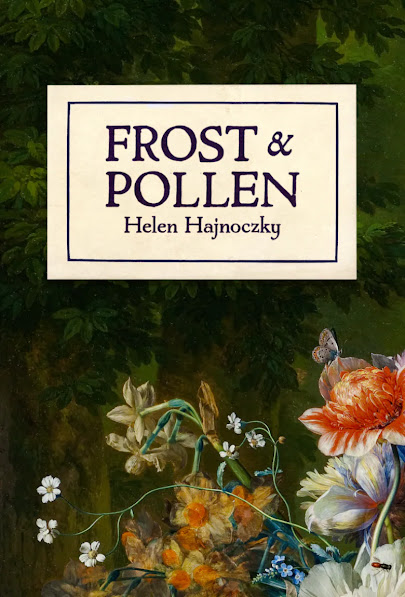 “Bloom & Martyr” is a suite of prose poems constructed out of a delightful staccato of gestures, sound and syntax, bouncing across and around the condensed lyric. “Grace you raze me moth and flutter,” she writes, “temperate / and dahlia my joints, your pressure, roots or / twine you entwine me.” Rich with floral language, in tenor and subject matter, she writes a passion of and through flowers, allowing the language free reign, propelling her text in a far different and more overt way than she has in previous works. “Bloom & Martyr: is a poem of lush, lyric sensuality. “Your thirst,” she writes, “your forearm. Tell me dry and haven, tell / me tight and bloom. Crocus and forbade, your ash / and graven. My crave, my cranberry, your switch, / cacti or avid. You hover, your blossom, your desert, / my desert, your crystal and shattered. You crush me, / please crush me, and crush me again. The sand.” In her 2015 interview posted at Touch the Donkey, she spoke of the work-in-progress “Bloom & Martyr,” offering that:

All the poems are in the same style, using a discussion of flowers and gardens as a way to explore desire from a feminist perspective. Writing the manuscript was incredibly fun. At the time I had been tinkering with my then manuscript and now forthcoming book for a while, and I had become a bit forestalled while editing. Then in August 2014 in Calgary I had a chance to read with Natalie Simpson whose work I find enthralling, and she talked about taking an approach to writing where she’d write a lot down in a notebook, and then type up the lines she wanted to keep. It had been a while since I’d written something new and I thought, ‘I used to write that way, why don’t I do that anymore?’ So I went back to Montreal and reread Natalie’s book accrete or crumble which is such a dense, rich, and inspiring book that after reading it I wrote Bloom and Martyr in a week and a half, mostly on my phone on the bus to work, on coffee breaks, etc.

The second section, “Foliage,” translates the late 14th-century Middle English chivalric romance story Sir Gawain and the Green Knight, retelling the story from the Green Knight’s perspective. Utilizing Old English patter and grammar, echoing some of the work of Philadelphia poet Pattie McCarthy, Hajnoczky’s poem is structured in four numbered “Passus” sections, with each poem existing as a self-contained call and response. It is a curious bit of timing that this book releases now, given the film adaptation’s simultaneous release, and I would think the two adaptations would be fascinating to experience in conjunction.

Stirred from my slumber in the sumptuous moss, moist with snow,
I awakened at Yuletide, when the evergreens grow flush with frost
And the ivy glistens in glittering garlands of cold crystals.
My juniper beard studded with snowflakes and lichens,
I wrested the roots of my arms from the dirt, my legs from the land,
And standing full and viridescent, I straightened and stretched.
And there, buried beside my bed, in a blanket of botanical debris
Was my axe, still grand and massive but dulled by dulcet peace.
Kneeling, I prised the prize from the placid patch of plants
And heaved this heavy honour high above my head.
And so
To play fate’s game
In my heart I know
I must seek Morgan le Fay, the dame
Who can sharpen this blade of woe.

Hers is a joyously playful and rollicking language, moreso than the sensuality of “Bloom & Martyr,” but with no less attentiveness to lyric flow, rush of sound and pattern. “Battering their barricades and bursting their doors,” she writes, “I bash booming into their boisterous banquet, / The silly aristocrats suddenly silent but for gasps, / I shift my axe from hand to hand, so the blade and hilt / Glint in the glimmering glow of their gilded gala.” 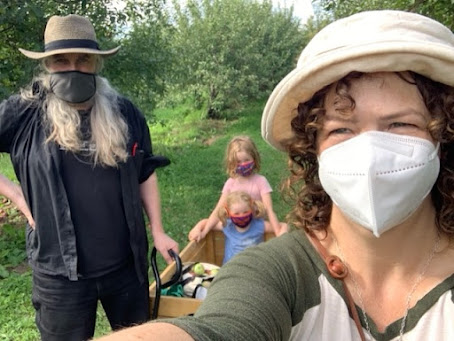 Born in Ottawa, Canada’s glorious capital city, rob mclennan currently lives in Ottawa, where he is home full-time with the two wee girls he shares with Christine McNair. The author of more than thirty trade books of poetry, fiction and non-fiction, he won the John Newlove Poetry Award in 2010, the Council for the Arts in Ottawa Mid-Career Award in 2014, and was longlisted for the CBC Poetry Prize in 2012 and 2017. In March, 2016, he was inducted into the VERSe Ottawa Hall of Honour. His latest poetry title, the book of smaller (University of Calgary Press, 2022), is nearly available for pre-order. In spring 2020, he won ‘best pandemic beard’ from Coach House Books via Twitter, of which he is extremely proud (and mentions constantly). He spent the 2007-8 academic year in Edmonton as writer-in-residence at the University of Alberta, and regularly posts reviews, essays, interviews and other notices at robmclennan.blogspot.com