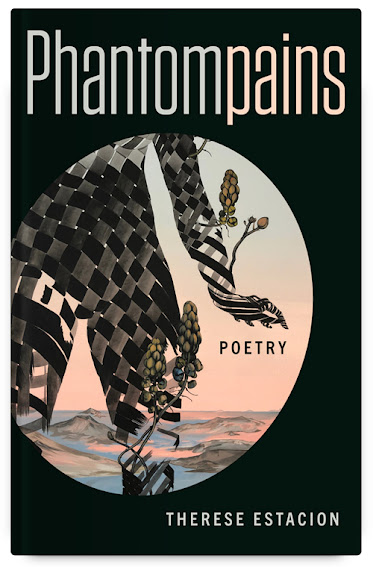 It often feels as if there are too few really honest voices out in the world today. Therese Estacion is one of those voices and her debut collection of poetry, Phantompains, was released this spring by Bookhug Press. The poems in Phantompains document her experience with a rare infection that nearly killed her. She lost both legs below her knees, several fingers, and her reproductive organs because of that infection. Estacion came to Canada from the Philippines at the age of ten, so she weaves elements of eerie Filipino horror and folk tales into her poetry. As she recovered and healed after a seemingly endless series of operations that helped to save her life, Estacion wrote poetry to deal with the trauma of the damage caused by the infection.

Estacion incorporates some Visayan language into her work, conjuring up images of the agta, a smoke ogre that “lives in green mango trees” and who will “try to tempt you/with an offer you can’t refuse: a wish.” In “Duwende,” we meet “little flat-nosed gnomes” that can cause great upset in a person’s life. The poet hates the fact that, in hospital after her amputations, “my life has become a red/duwende.” She wonders if she will be okay and what her life will be like after leaving hospital. A merman makes an appearance in “Afloat,” when Estacion writes: “I think about this merman often when I’m sitting in my/prosthetist’s office without my legs on    Seeing my limbs halved/without feet makes me wonder if I am a fish person as well.” Readers encounter the tianak, a “red-eyed vampiric baby,” The White Lady of the Philippines, a ghost that has red eyes and “weeps because she can see our dead uterus lying sadly on a/pillow.” The last creature in this first section is the aswang, a type of abat that eats flesh: “She/laughs and pretends she is interested in your cock. Excuses/herself. Leaves. Finds a hiding spot. Dismembers. Hides her/legs by the garbage.  Grows fangs and wings becomes hideous (but keeps her perky tits)” while she “waits for you perched on the roof.” These are not your run-of-the-mill, everyday kind of scary monsters. These are the ones that visit when you are walking between waking and sleeping, when you are overly medicated to fight off intense physical pain, and when you are at your most vulnerable and raw—at the very point in time when you can’t tell truth from fiction.

Estacion was just thirty-three years of age when she fought for her life, facing septic shock, pelvic inflammatory disease, necrosis, leg and hand amputations, as well as a hysterectomy. Phantompains documents her agonizing journey from near death to a new kind of life in “Pee,” a series of short pieces that speak to her fast decline. What begins as what seems to be a urinary tract infection and a dose of antibiotics soon becomes a terrifying episode where her partner rushes her to hospital by car. Estacion’s parents fly from Ontario to British Columbia, to be by her side. She is thought to be dying. There is an ‘in between’ place, where Estacion moves between worlds, drugged up while the doctors and nurses fight to save her life. She only knows that she is intubated, that she has a catheter, that she does not really know what is happening.

In “Coma Dreams,” she writes “I should have stayed in my coma,” knowing that her body is “no longer whole,” wishing that she had not woken up. In “Hands,” Estacion describes her hands after the infection has had its way with them. “I am dreaming of what my hands once/were   Not the bulbous and scarred ones/I have now.” They are, she writes “my new guillotined hands,” and then she says “I cannot control hands that are not mine.” There is only the illusion of having once had control over a life that was once yours, but a traumatic event like a fierce infection upends that illusion completely, leaves you trying to find an anchor in the middle of a fierce storm.

The poet’s work is visceral and poignant as she begins to navigate a world that is blatantly ableist and which also erases a patient’s identity during a time when what they most need is to be seen, to be validated. In “The Amputee by the Magnolia Tree,” Estacion writes that “Amputations bloom/my name fades.” She feels infantilized, minimized, and nearly erased by the people who care for her, and by those who encounter her afterwards. The poems in the sequence “Report on Phantompains” compare the pain of amputation to crucifixion. She writes of a ride in an ambulance when an encounter with a pothole in the road feels like “a sharp blade jabbed into my/phantom ankle.” In another part of this sequence, Estacion writes “For 3 days my ankles felt like they were/being nailed to a cross, even though they/were already gone.” As someone who has cared for a person with a transmetatarsal foot amputation, these lines ring true to me. The phantom pain suffered by an amputee is deep and agonizing, especially when a part of their body is no longer physically there.

The most moving part of Phantompains is the section that deals with Estacion’s hysterectomy. In the midst of everything else, she wakes up to learn that the infection attacked her reproductive organs. In a section titled “Eunached Female,” the poet struggles with what it means to have had that choice to reproduce taken forcefully from her. Too, she documents her journey in seeing herself again as a woman who is still feminine and sexually desired by her partner. In “EF I,” she asks her lover to have sex with her: “Eunached Female is still paranoid her vagina is ruined     She/wants to do it one more time just to be sure.” In “EF II,” the poet writes: “Her holes are never aroused anymore since she has been/infantilized by    _everyone who sees her.” In “EF IV,” she tells her partner: “Lover leave me.      Pursue warmer sex.” The end of this series of poems, after an imagined conversation with her uterus on a frozen Northwest Territories lake, is poignant. The poem becomes a prayer when she writes:

For my feet, for my fingers, for my Uterus

All I can offer is a memory

they were full
they were ecstatic
& in flux

So much of the societal perception of what men desire sexually has to do with how a woman’s body looks physically. What size is it? How is it revealed or displayed? How is it hyper-sexualized and marketed in social media feeds—whether by women themselves, or by companies and influencers that sell products? To have to face that, without a massive physical transformation, is difficult, but to have to face that comparison alongside a series of radical life-saving physical amputations, would be difficult. Estacion gets at the core questions of identity, femininity, and desirability. These aren’t simple questions for most women. The poems that speak to these issues are perhaps some of the strongest in the collection because of how honest and true they are in voice and content.

This is a longer than usual review for me. That’s because this collection, Phantompains, is unique in its topic and content. I can’t think of anyone who has written poetry around a life-threatening infection, or around a hysterectomy that resulted from it. And I certainly can’t think of anyone who’s written so openly about the hell that is amputation. I’ve witnessed that myself, as a daughter whose mother had a transmetatarsal amputation, and it confounds me that it’s so often just ignored or hidden. Amputees often need to fight to be seen, and ableism is a real issue that needs to be openly discussed. Therese Estacion’s Phantompains gets to the heart of all of these issues with a poet’s deft touch and skill. It’s a brilliant debut book of poems, and I’m looking forward to seeing what comes next. 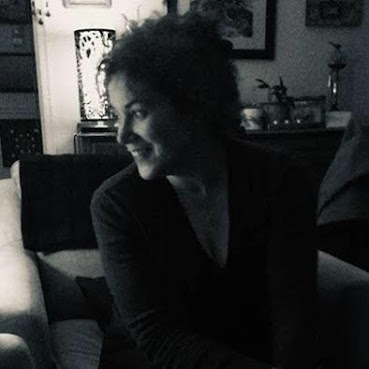