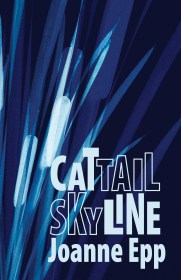 In Cattail Skyline, her second full-length collection with Turnstone Press, Winnipeg poet Joanne Epp really does make you feel as if you’ve “just walked through a doorway in the air” where life is stirring on many atmospheric layers at once. With its deceptively plain language, like a scraggly-haired rambutan from Cambodia“you have to take it in whole.” During National Poetry Month 2021, I talked with Epp about country roads, mythical trees, and why she hopes her readers can put her book down.—Angeline Schellenberg

AS: Hi Joanne. I loved your first book Eigenheim, which I understand means “one’s own home,” launched exactly six years ago. How would you say Cattail Skyline is different from your debut collection?

JE: Eigenheim was a search for home—as a place and a state of being. Cattail Skyline takes home as a given and explores new places…and familiar ones in new ways.

AS: Tell me about the title. Besides the fact that it was an excuse for a gorgeous sky-blue cover, why Cattail Skyline?

JE: What I notice, and hope my readers see, are the different levels in the Prairie landscape: of course, there’s the sky, and there’s what you see at ground level, when you crouch low. Then when you go down the creekbank, that’s another level altogether: the cattails become your skyline. I find those changes in perspective interesting. Small things down low catch my attention.

AS: How did Cattail Skyline come together?

JE: I tend to start with something particular, with an image—say a road to the cemetery or a flower by the creek—and the themes develop as I keep writing. I began thinking of these poems as the beginnings of a manuscript way back in 2008, while putting together my application for the Poetry Colloquium at Sage Hill. What I had thought of as several separate series of poems turned out to have themes that related to each other in interesting ways. There has been a lot of adding and revising, and some subtracting, since then, but that was the start.

AS: Most of the poems about a particular place, such as Star Lake Camp in Whiteshell Provincial Park, are grouped together, but the Cemetery Road prose poems are scattered between the other series. How do those pieces function within the collection?

JE: That arrangement was Jennifer Still’s suggestion. When my editor Alice Major asked, “Does this collection have a single arc? What is its shape?” I said, “It’s a path with several branches.” The Cemetery Road is the path that leads through the book, and the other sections are the trails leading off it.

AS: Speaking of the editing process, when I went through my first book, I found far too many socks. Is there a word you realized you use over and over in this book?

AS: I noticed that. I found at least 75 references to trees, including 13 different species. Why are you so drawn to trees?

JE: It’s possible there are theological underpinnings. Certain things have stuck in my mind, such as one of my professors at Canadian Mennonite Bible College talking about how the biblical story is bracketed by images of trees—the Garden of Eden’s Tree of Life (Genesis 2:9) reappears in the vision of a reborn Creation in Scripture’s final chapter: “and the leaves of the tree were for the healing of the nations” (Revelation 22:2).

AS: Do you have a favourite poem or section in Cattail Skyline? Why?

The first one that comes to mind is the Omand’s Creek series, about the park near my home, because it’s so cohesive, with a poem for each month as the landscape shifts. I like the way I take that small area of ground and see so much in it.

AS: “Blue hills,” the section set in Cambodia, is unique—how does it speak to the rest of this book about the Canadian Prairie?

JE: One of the main threads of the book is how we connect to a place. When I visited Cambodia for my work with Mennonite Central Committee in 1994, I was absorbed in an unfamiliar place. The poems are me reflecting on how it’s not quite possible to know a place, despite that immersive experience. I didn’t write the Cambodia poems right when I got home. There were so many sensory impressions I had to let settle. Years later, an uncle asked, “What happened to you there?” This series is my attempt at an answer.

AS: As I read, I had the sense of the Prairie buildings and bones disappearing under layers of silt. Is there a sense that you feel as foreign on the Prairies as in Cambodia because of how the land—or you—are constantly changing?

JE: That’s true. The British geographer Doreen Massey says our memories are tied as much to time as to place; they’re memories of places in a particular time. When we return in another season or decade, we’re visiting a different place.

AS: So can we ever feel at home in a place?

JE: I think so. What you gain after a long time of caring for a place is a sense of attachment. What you have to steer away from is a sense of possession: my creek, my lake. It’s better to speak, as Jenna Butler does in her book A Profession of Hope, of “landscapes we belong to.”

AS: Would you call this an environmental book?

I know there are books of poetry that talk in a more elegiac way or angry way about environmental damage. I couldn’t do that; it’s just too sad. But what I could do is be attentive and write as carefully as I could about the places I’ve become attached to. A book I read recently said that in talking about climate crisis, where you have to start is with love and gratitude. Because love and gratitude imply a relationship of interdependence, one that acknowledges we’re not separate from the rest of creation. There’s no such thing as “the environment”: there’s the world and we’re a part of it.

AS: What experience do you hope to leave with your readers?

JE: My first thought is I want them to go for a walk!

AS: So you’re not concerned that your book could convince readers to put it down and head outdoors instead?

JE: Not at all. I walk all the time: to get to places, get exercise, clear my head. It’s the way I explore. I’m happy to think others might find the same enjoyment in it.

AS: But you aren’t always moving: I counted 22 occurrences of the word still in Cattail Skyline, both in the imperative to “be still” and in the reflection on what is still here.

JE: I hadn’t picked up on that. But the two meanings are connected: in that quiet observation, you can pay attention to what’s still there and what has changed.

AS: Thank you for reminding us to keep our eyes open. 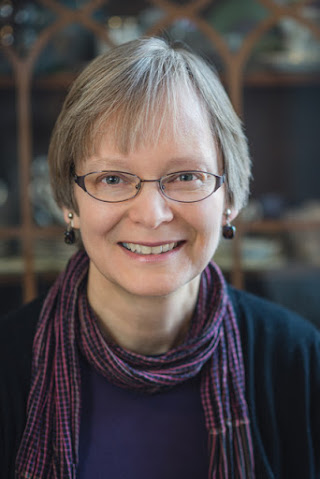 Joanne Epp is the author of Eigenheim (Turnstone Press, 2015) and the chapbooks Crossings (2012) and Nothing But Time (Seven Kitchens Press, 2020). Her poems have appeared in Prairie Fire, The New Quarterly, Canadian Literature, and other journals; her collaborative translations with Sally Ito and Sarah Klassen have appeared in The Polyglot. Her second full-length collection, Cattail Skyline, has just been published by Turnstone Press. She lives in Winnipeg. 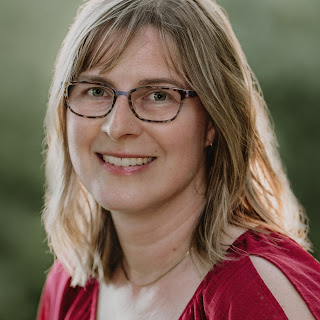 Angeline Schellenberg wrote Tell Them It Was Mozart (Brick Books, 2016), a collection about raising children on the autism spectrum, which won three Manitoba Book Awards. In 2019, she published three chapbooks and was nominated for The Pushcart Prize. The host of Speaking Crow—Winnipeg’s longest-running poetry open mic, Angeline recently launched Fields of Light and Stone (University of Alberta Press, 2020). She loves talking to dogs and eating other people’s baking.