how to write about what you carry but don’t know?
strange inheritance  one carries
everyday code  understandable if borne of Haitian soil 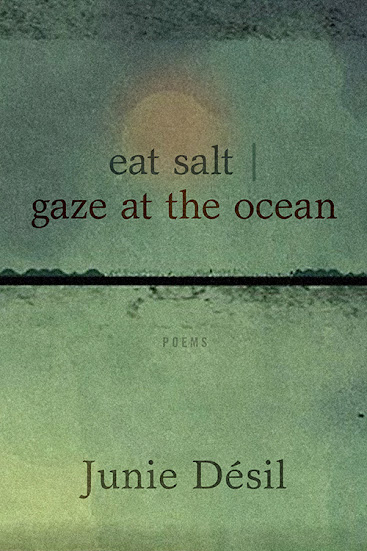 In Vancouver poet Junie Désil’s full-length poetry debut, eat salt | gaze at the ocean, she writes in fractals, fragments; composing three sections of poem sequences stitched together with phrases, research, lyric fragments, memoir and first-person accounts. Her poems stagger, pause, call out and reach for impossible distances. “i start with origins / i was not here   i am not there,” she writes, as part of the opening sequence, “ rather // the line from here   today tethers collective trauma  umbilical / centuries old // those bones a bridge over oceans / triangulated   passages [.]”

Of Haitian ancestry, Désil is “Born of immigrant parents on the Traditional Territories of the Kanien’kehá꞉ka on the island known as Tiohtià꞉ke (Montréal), raised in Treaty 1 Territory (Winnipeg).” “faces blue-glowed / unwavering    our pursuit toward   more numbness / feel   but not too much / don’t   look up / wear   human-cancelling headphones resolutely / earplugged / hearts too,” she writes, as part of the sequencec “zom-bie | / ‘zambi /.” Utilizing depictions of the zombie, an image centred in Haitian culture but referencing a variety of western adaptations as well, she works to write her way into, or back into, being and belonging; discovering the roots of her displacement and placing them. As she writes: “colonial words                                 crowd your mouth / still your tongue / and / sever the connections / between    land               language                 self [.]”

The back cover of the collection offers: “eat salt | gaze at the ocean explores the themes of Black sovereignty, Haitian sovereignty, and Black lives, using the original Haitian zombie as a metaphor for the condition and treatment of Black bodies. Interspersed with textual representations of zombies, Haitian society, and historical policies is the author’s personal narrative of growing up Black and Haitian of immigrant parents on stolen Indigenous Lands.” To zombie is to leave, be brutalized or broken; to zombie is to become changed, often by forces beyond one’s control. To animate, reanimate. To zombie is to become soulless, having had one’s soul removed through violence, or changed through the loss of culture, community or place. How does, through all of this, retain or even regain one’s own humanity? “Just bone on bone,” she writes, “weary grating questions [.]”

There is such incredible pacing through this collection, composing a deeply personal and ambitous book-length poem of great longing, hurt, heart, patience and precision. “this poem you are reading took me three years to write.” she offers, close to the end of the collection. “if we’re counting / and being accurate, it took me over twenty years to write. i took a snapshot / of 2016. i counted over two hundred deaths in one year. if we’re being / comprehensive, this right here does not include the dead from the / transatlantic slave voyage, those who leapt to their deaths, who died / beneath the cargo hold, once stolen from their ancestral lands, those who / died in violent capitalist servitude, who died in violent encounters with / white holders of enslaved Black people, this list does not include those / who died scattered about the various colonialist projects and expansions / on stolen lands.”

Désil utilizes archival accounts of insurrections, of the slave trade and colonialism. She writes of men working in the sugar fields, and contemporary violence upon black lives and communities. She writes of Alice Walker and Nora Zeale Hurston; she writes “I can’t breathe.” She writes of western depictions and references to the zombie, attempting to understand how the term has shifted, evolved, and remained intact. “(forgive) the repetitious,” she writes, “a long-winded account / we tell stories twice / sometimes more   different angles / so you feel the story” (“transatlantic | zombie | passages”). Or, as she writes as part of the third and final section, a sequence-section that shares the book’s title:

we still need to talk about the ocean

In Why must a black writer write about sex? (Toronto ON: Coach House Press, 1994), Haitian-born writer Dany Laferrière famously wrote that he composed his first novel, How to Make Love to a Negro (Without Getting Tired) (Coach House Press, 1987), in order to save his life. Through eat salt | gaze at the ocean, Désil appears to be driven by a similar impulse, working to regain what she has lost, as well as what a scattered community has lost, through the ongoing violence of colonialism. At the end of the collection, she asks: 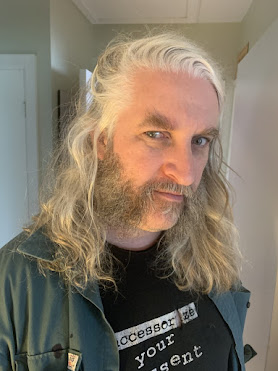 rob mclennan’s most recent poetry titles include A halt, which is empty (Mansfield Press, 2019) and Life sentence, (Spuyten Duyvil, 2019), with a further poetry title, the book of smaller, forthcoming from University of Calgary Press.