Writing at home is being in the brick of a body squeezed in among all the bricks of tasks. If a writing retreat were only time to write, it would be indistinguishable from writing at home. Sage Hill Writing has a schedule with lectures, discussions, one-on-one consultations with a teacher, social times, and Pilates sessions. The 10 days could be blocked off as a distinct higher-paced writing block.

Sage Hill was started 31 years ago, and until this year offered its retreat in person in Saskatchewan. (Most of the cost from Ontario and Quebec is travel.) Given Covid, Sage Hill experimented with offering their streams of classes via Zoom. I was in the Emerging Writer with Micheline Maylor and Tariq Hussain, stream since my target project was to find my feet in my novel. 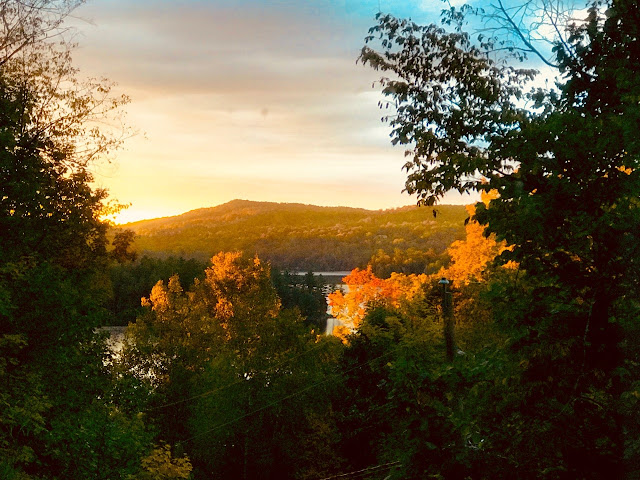 Virtual residency is astral projection. Your creative consciousness is on a rubber tether to snap you back to cooking, cleaning, errands, life maintenance, but you can get distance and higher perspectives on how the craft is best done.

Being able to go anywhere by Zoom is pretty amazing anytime, but especially during quarantine. Our class, spread across several time zones from Nova Scotia to the Yukon, was able to converse. People apologized for eating but, realistically, with programming morning, noon, mid-afternoon and evening, we all have to eat sometime. Online courses only lacks them feeding participants, and the vistas and isolation from online. I suppose if I were exceedingly clever I would have used all my good-energy days to make ahead frozen meals for a week or so. (Body and organization didn’t work out that way. Partway through I considered a meal subscription, but Covid.)

Being able to have eyes on my baby manuscript and getting orientation from Micheline Maylor, a mind and a writer I greatly admire, boosted my hope for finishing the draft of my contemporary fantasy novel.

Class cohorts were generous with resource sharing and I’ve devoured a couple recommended books. My sense of the overall picture of literature is bigger and deeper because I’ve never read fiction with the eye of a maker before.

My concussion caught me up short. (Every time I feel functional I go wheeeee! I’m freeeee! I’m cured.) I was going all blazes for five days straight. It was the most intensively I’ve written or lived in a couple years. Then my brain hit a brick wall with a soft splish, figuratively speaking. Body crashed into ache and sleep need. Headaches came. With this being a unique opportunity, I tamped myself down but continued as I could.

My internet being what it is— I’m lucky to get a text email in or out one day in three—  my experience was, for no fault of the program, hit and miss. I couldn’t indulge in evening chats as much as I’d like. I often couldn’t get enough signal to broadcast my video. Being fiercely shy around strangers, it was hard to join the evening circles when I was there in person, so that tension was relieved. I think being on online chat is easier because I can listen to fewer channels at once, and hide while listening without being observed. Being a name or fixed image lost the advantage of feeling more like real-time interaction, but cookies crumble as they do.

Rather than hide away in my home office as I had planned, I was waving a computer around in the porch like it was a lighter,  climbing around a hillside in deerflies, or up in our studio searching signal, even enough for a phone-in only option, or on our neighbour’s porch or in their basement. The neighbour brought me iced water and biscuits and butter tarts, which took the edge off frustrations.

Tara Dawn at Sage Hill sent out transcripts of readings, which made me feel immeasurably grateful and included.  Some used the chat function which helped. Text is easier than audio. Some readings were recorded so I could watch asynchronously when the internet was feeling less fevered with demand. We were encouraged that there was no punitive weight if we didn’t show because we got in a writing groove. I missed 2 Pilates from writing grooves, but I could catch up later on the recordings. That I could get into flow state was a breakthrough. I’ve been grinding my concussed brain against walls for a couple years, when it would move at all. (PSA: I can do high functioning, but not for sustained periods. Please don’t say I seem normal. Invisible illness is by nature invisible and the spoons used is enormous. No one but my hubby sees the energy crashes.)

Digital copies of the readings done in the class were much easier to absorb as text than to the ear (because hearing takes more neural load than text). Meeting someone else in the class with concussion was a great connection. We’re relatively rare as a sub-set of the writing community. We could compare symptoms and journeys. All-campus and public readings meant putting faces to writers whose names I’ve seen or whose faces I haven’t seen in too long.

It was well-worthwhile. My gratitude goes to the anonymous donor who gave me a bursary to halve the cost of my attending. I encountered a few writers I’m keeping in contact with who I would likely never have met otherwise. As an outcome, at least a couple groups formed and spun off to continue workshopping together after. As fellow Sager Hiller Kim Fahner said, virtual "keeps us connected during a disconnected time.”

I applied to the Sage Hill program with a 10, 000 word “manuscript” that was, on reflection, a gathering of scene summaries. Just over a month later, it is over 50,000 words, expanded out, with better and tighter sentences and more firmly hooked-forward chapter structure.

Like poetry, novel writing is also apparently about research and reaching deeper. Actress Michelle Yeoh is a hero of one of my novel’s main characters. Yeoh said, “When you face up to bad things in the past, the most important thing is not to allow them to happen in the future, and as storytellers, we must play our part in that.”

In a recent interview with Adrian Harewood at The Ottawa International Writers Festival, Thomas King admitted his greatest grief of writing his novels was that they did not change the world. (I would add “yet”. Everyone, go read his novels. Gift them for Christmas to your conservative relatives.) This larger action of storytellers to build a world we want, to model, and to do it not sufficiently, but effectively and sublimely, was a bugle call to the inner writing hounds. At Sage Hill, there was time to consider this longer view of what a piece of writing is trying to accomplish in the heart and in the world, as well as the nitty gritties of mechanics of alert sentences and hooks.

It took me a couple of weeks to recover from the overextending of my energies, but I had got stuff done. I wrote 20,000 words or so in a few days. I was able to get answers to writing-world questions that I’ve asked before and never got clear answers, around POV and “how agents work”.

I did Sage Hill in person about a decade ago as well and that allowed a deeper sinking into craft, as well as meeting a few friends. The foggy pre-dawns with raven croaks, the afternoon silence of the deep-walled cells, and the musical evening singalongs will stay with me. It made me feel more like a real poet to be accepted as one by strangers than to be accepted at home somehow. People who will meet me again have a vested interest to not piss in the pool, but those who will never see me again have less risk at being honest, if one can judge human nature by internet trolls. A nasty metric, admittedly.

I’d add that it’s rare to find a more talented cohort of peers. So many people who have never published anything write with jaw-dangling, foot-stomping quality.  So many in parallel writing lives for decades, yet we were invisible to each other. All the connection. It brings wetness to the eyes to witness. 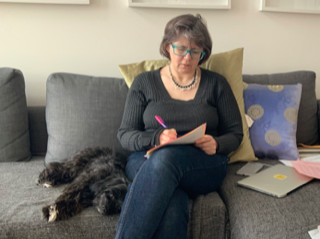 Pearl Pirie lives in rural Quebec within the calm of wildlife. She is perpetually building a studio in the woods. Her 2020 collection, footlights, from Radiant Press, is available in October.