Above all, I must say that being Poet Laureate has taught me a great deal about collaboration and the role that poetry can play in a community. Writing poetry is most often a solitary activity; you’re communing with language, experience, memory and tradition. But writing for a community, collaborating and promoting poetry within my hometown of Plymouth, Massachusetts has evolved my thinking about what poetry is and what it can do.

I love the poet Charles Olson’s writings about “polis” and the sense of community that he developed in Gloucester, Massachusetts—just up the coast from Plymouth. His book The Maximus Poems has been a touchstone. Olson’s insistence on the importance of community and the role of the poet as historian and spokesperson within the community is compelling.

I’ve also been thinking about the Commonwealth of Poetry. Taking off from the Commonwealth of Massachusetts and André Malraux’s concept of a museum without walls, I’ve been considering poetry as a mutual territory that’s open for all readers. Poetry is a shared wealth of tradition and history and language and literature that all humans can contribute to and from which all humans can draw inspiration, entertainment and guidance.

Writing poems that have an intended audience within Plymouth and writing poems for specific community events has helped me move into a civic voice rather than the vatic lyrical voice I had most often preferred before.

I love W. H. Auden’s ideas about civic and vatic poetry and his ideas about public poetry written from within the sensibility of an audience that’s also a community. Much of the contemporary poetry I read seems to have moved away from the concept of poet as public voice and entertainer. The subjective, individual identity of the poet seems more valued now.

In this way, my role as Poet Laureate has invigorated my own poetry as well as my understanding of how poetry operates in society and the role it can play. I am lucky and grateful to have this opportunity and I hope that I can enrich life in my hometown. Plymouth is a beautiful coastal town with a diverse and vibrant community, thriving businesses and a rich history. It’s the ideal place to be a poet. 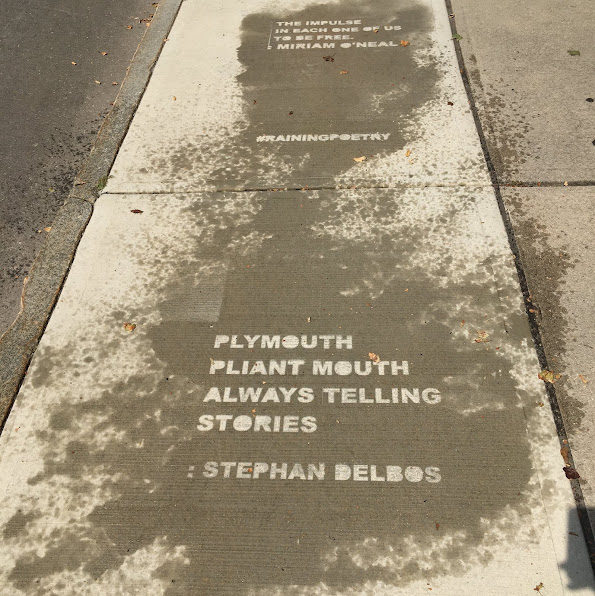 I was named Poet Laureate of Plymouth in March, 2020. I am the town’s first Poet Laureate. The position was created partially to help Plymouth celebrate the 400th anniversary of its founding in 1620. There were numerous events planned, both with representatives and organizations from the local community and with international guests. The plan was for the Poet Laureate to read at some of these.

There was a competitive application and selection process for the Poet Laureate and in February, 2020 I attended a reading at Plymouth Public Library with the three other finalists, all of whom are very talented poets. We had a great reading to a large crowd and ultimately I was selected to be the town’s first Poet Laureate.

Most of the events Plymouth planned for the 400th anniversary were canceled because of Covid, so the laureateship has evolved significantly. I originally planned to host readings, public events and workshops, but most of the events of the first year of my laureateship took place online. I set up the Plymouth Poetry Forum on Facebook to help promote poetry in Plymouth and to promote Plymouth internationally. I started an epistolary poetry project with the Poet Laureate of Plymouth, England which continued throughout 2020. I also hosted online readings for Thanksgiving and the Fourth of July with dozens of local poets. I read my work online for the Plymouth Public Library, recorded a series of short readings in locations throughout town, and appeared on local television.

One of my first projects was to work with Inky Hands Print Shop & Gallery in downtown Plymouth to create limited-edition broadside prints of the winning poems from a Plymouth poetry contest. In the socially distanced summer of 2020 we had the winning poets come into the shop individually to sign the prints, and then in the summer of 2021 we finally had a reading at the shop. It was a very fulfilling collaborative project.

As the restrictions began to lift in 2021 I was able to host more public events. We had an outdoor reading with several local poets in Brewster Gardens, a beautiful park on the waterfront in Plymouth. This was part of a local sidewalk art festival and I collaborated with the Plymouth Bay Cultural District, the Mass Cultural Council and the Town Promotions Fund, all of whom offered great support. After the reading we unveiled a project called Raining Poetry on sidewalks in downtown Plymouth.

For the Raining Poetry project I created stencils of poems and installed them on the sidewalk with a water-repellent spray, so the poems only appear when it rains or when the sidewalk is wet. They’re invisible otherwise and disappear after a few months. I’ve been able to do this in Plymouth as well as in Cotuit on Cape Cod with the Cape Cod Collaborative Arts Network and the Cotuit Center for the Arts. It’s a fun project that gets poetry into public spaces in an interesting way.

During National Poetry Month in April, 2021 I sent 60 poems in the mail to local businesses as well as local residents. These were poems on postcards, along with some information about the laureateship. The poems I sent to businesses were targeted, but I decided to also send poems to random people from the phonebook. I got very positive feedback from local businesses, though I learned that a man called the library furious that his wife had received a poem from me. It was a nice reminder of poetry’s power to disrupt and disturb!

Another major highlight of 2021 was teaming up with Community Art Collaborative, a local non-profit that has created crowd-sourced public art installations. I participated in two of these, one at a local hospital and one at Hedge House, which is part of the Plymouth Antiquarian Society. These installations involved words and images created by nurses and staff at the hospital and by local students. I wrote poems that were featured on both installations and I read during the unveiling ceremonies, which were really lovely events. At Hedge House I had the chance to read with musical accompaniment by Angelica Vendetti, a local violinist and teacher, and we later collaborated on two recorded performances at Plimoth Violins.

I’ve also had the opportunity to write a number of commissioned poems as Poet Laureate. These include a poem for Plymouth’s graduating high school class of 2020, who had a drive-up graduation at the height of the pandemic. I also wrote a poem for the Plymouth Area League of Women Voters encouraging people to vote in 2020 elections. I’ve written poems for local cultural groups on Juneteenth and after the installation and vandalism of a rainbow crosswalk during Pride Month. I’ve written several other occasional poems based on local events and dedicated to local businesses like Plimoth Violins. Some of these have been published in the Plymouth newspaper, the Old Colony Memorial, where I’ve also written editorials about poetry. I’ve had the chance to host online poetry classes and to speak to the local Rotary Club, and I’ve read and collaborated with other Poets Laureate from around Massachusetts.

What I Want to Do

One ongoing project I am excited about is the Plymouth poetry anthology I am currently compiling and editing. This anthology gathers more than 400 years of poetry written about Plymouth, its history and community. It includes writing from contemporary local poets as well as some of the classics of American poetry including Robert Frost, Longfellow, E. A. Robinson, Mercy Warren and many others.

I’m excited about this anthology because it’s both timeless and timely and will interest all readers, especially those who have a connection to Plymouth and its mythical history, and who want to reexamine those stories we all know from school in the way only poetry can. The anthology will also include art from local artists. I’m hoping it will be published in the next year or so, depending on funding.

I have a number of other projects in development that I hope will promote new ways of conceiving of poetry in our daily life and in our public spaces. I want to continue to expand the local consciousness of what poetry can be and where it can take place and how it can function in a community. I want to keep making poetry an active presence in Plymouth, bringing poetry out of the books and into the streets, into Plymouth’s everyday consciousness. Into the air itself. 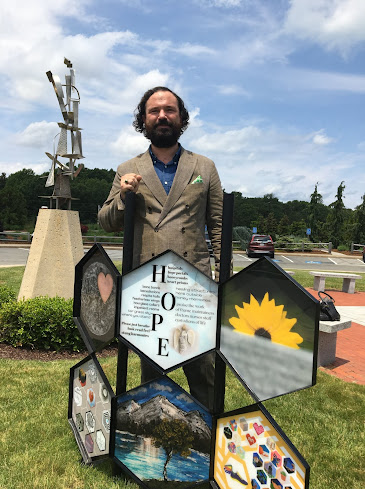 Stephan Delbos, the first Poet Laureate of Plymouth, Massachusetts, is the author of the poetry chapbook In Memory of Fire (Cape Cod Poetry Review, 2016); and the poetry collections Light Reading (BlazeVOX, 2019); Small Talk (Dos Madres, 2021); and Two Poems (The Literary Salon, 2021). Two of his plays have been staged: Chetty’s Lullaby, about trumpeter Chet Baker, in San Francisco in 2014, and Deaf Empire, about composer Bedřich Smetana, by Prague Shakespeare Company in 2017. His translations from Czech include Vítězslav Nezval’s The Absolute Gravedigger (Twisted Spoon, 2016: recipient of the PEN / Heim Translation Grant) and Woman in the Plural (Twisted Spoon, 2021); and Paris Notebook by poet Tereza Riedlbauchová (Verse Chorus Press, 2020). His scholarly study, The New American Poetry and Cold War Nationalism, was published by Palgrave in 2021. He is a founding editor of B O D Y (www.bodyliterature.com).