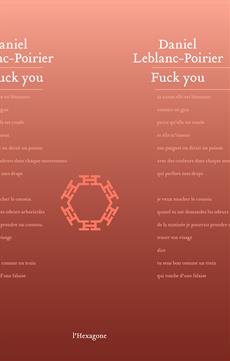 Daniel Leblanc-Poirier is onto something. A thrash surrealism, a hypertrophied Boris Vian without any graves to spit on, or any concern for anybody’s grave. He stands out from the thrash poetry movement in Québec (others do for other reasons), maybe because of just how charming the thrashiness of his poems is. This book is at times disarming by its honesty. At times endearing by its uplifting images. At times frustrating by what feels like an intent to shock for the sake of shocking.

I find the book difficult because I don’t know who says “fuck you” to whom. The author to the woman described in the book? The male speaker/character to the female character? Her to him, in her almost complete silence and lack of coherent response? Or given the lack of a clear orientation of this “fuck you,” the writer to the reader?

Maybe this “fuck you” is an answer to absurdity. There’s a lot of absurdity in this collection. The focus is so clearly on providing images that the poems seem inwardly fragmented. They are not ambiguous; instead, they escape interpretation, so much so that their meaning could be entirely open. There is absurdity, and not ambiguity, in passages like “when you arrive / I’d swear I see / a sad tornado / of clementines” (“quand tu arrives / je jurerais voir / une tornade triste / de clémentines,” 31). Why add the clementines, if not to say that she is and is not a tornado, that there is something sad about her but that she is not sad, and that these perceptions are entirely his?

There is no point in pushing the interpretation very far; the act of reading forces us as readers to give them a meaning of our own. Or to sit back and look at the poems strictly aesthetically, as a mix of images that are clearly there in front of us and emotions we know we are creating in response to them. The absurdity is owned in the poems themselves:

The book, and the poems, do have features: sex, bodies, food, music, drugs. Genitalia, which accounts for at least three of these. These features are combined, recombined, to offer images that in spite of their implausibility or impossibility can very easily be imagined. The combinations do offer moments of joy and crass beauty, like in this poem:

Here the somewhat infantile incantation of genitalia is acknowledged and immediately replaced with even more absurdity. In spite of their repetition the poems are not about sex, bodies, food, or music, or drugs. They are quite openly about a relationship. Even taken together, they offer no arc, and little retrospective meaning. Perhaps there is blinking, alternating between emotional states, joy and worry, but no emotion exists alone here.

The relationship is not simple or uncomplicated. The speaker recognizes that he is dominated, but also that he desires this domination. This desire doesn’t go without hesitation: “you call me / my toundra is in orbit / the telephone sucks my confessions / and I compose a ladder up to doubt” (“tu m’appelles / j’ai la toundra en orbite / le téléphone suce mes aveux / et je compose une échelle jusqu’au doute,” 35).

Violence flows through the relationship, but rarely openly, only as a possibility, as part of an exchange where the speaker gives, the woman he (tells he) loves receives, and the speaker receives some kind of gratification or reassurance as a result of this gift. Violence is at times one possible meaning, depending on our desire as readers to see it in the poem or not:

Is the train falling a bad thing? Is it her face he traces with a knife, or is he tracing her face onto another surface? Is there an equivalence between saying these words and tracing with a knife? The reader is already forced to decide early on in this stanza: does the request lead to a desire to touch a cushion (and find some kind of comfort) or to the possible desire to pick up a knife? This poem, like most, features how images can exist in pure juxtaposition, without clues to bind them into a greater whole. They are close to a stream of consciousness writing, a stream of hallucinations.

So this isn’t a collection about the search for meaning in the aesthetic, in food and drug and sex, or about how they stand in the way of a genuine relationship. I can’t help but feel that Leblanc-Poirier knows what he’s doing even though there’s no indication for us to guess what that is. He points at propriety and at the monstruous, hides heroin, morphine, and pills in metaphors that either mean absolutely nothing and illustrate the meaninglessness of what we do, or that force us to figure out what our own drugs are. He creates images out of ethics and pedophiles, out of unceded territories, out of feminism and transphobia; he leaves no room for the well-meaning and the righteous. He’s not nihilistic, he does things to us with words, forces us to choose between putting the book down to look down on it, or putting ourselves in the poems in spite of the fact that his writing makes it nearly impossible to identify with anything in the poems.

Maybe this “fuck you” is addressed to the reader after all. 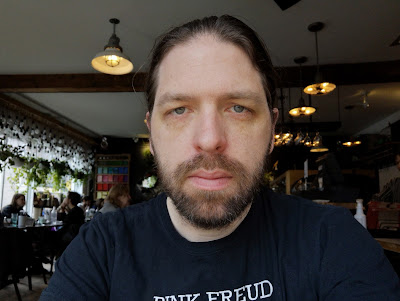 Jérôme Melançon writes and teaches and writes and lives in oskana kâ-asastêki / Regina, SK. He is the author of two books of poetry, De perdre tes pas (2011) and Quelques pas quelque part (2016) with Éditions des Plaines, one book of philosophy, La politique dans l’adversité (Metispresses, 2018), and has a bilingual chapbook newly out with above/ground press, Coup.