Jed Munson : Mouse on the keys

at with this boomwhacker. The exercise

exploded into a chest’s
desire               for five rivers’ names as Ol’
Guiltree crabwalked through the outdoor mall again, ninefaces
Aflame in this area
Of
maximum surface to be desired back by.

Targets on benches revolve into a winterscape.

On e
silent Chinaman, Uncle You-Again, floats through the postgame
arena where movement was proven

I point to proven points on a map
and surprise them with the authority of my pinky.

The tenderness of the takeover.

MouseMutt was out there too those days,
in a rented RomeWig too big for him,
tonguing the mantra
—Look.

(he’s my barber’s barber,
he admits the RomeWig is scratchy)

I keep going: beyond tempered adoration for a freckle
once pecked out of the screensaved
temple!

Some know this tune without my explanation. Still,

of that cave of sequence we stopped at
to look like we understood
what we were there for.

Remember how I imported him
the memory

How
right about then the rain would pour

in the middle of a dormant fountain?

A
National Wonder
drenched in the distance
I couldn’t for days see through my love for?

The infinite need for a hairspace, one
short?

Covered in the fading
tarp of the sky?

It’s been gone since the livestreamed flames.

Competing for our fancy
funding was the war, tightening its new brass bolo tie,
the wedding,
the second wedding for the white half, which had to be bigger

and better, with fries.

A book of falls with captions, that book flapping
as it falls,
unlike my phone that just clapped against the mixed
woods,
into the canyon between the shelf and the wall
one morning
without the chainsaw outside my window,
the pages performing a community
force in the flock of redeyed
purplenecks
taking flight to the conference
at the fountainside, the lifted-off sidewalk
lifting after them, feeling
felt, left, winged, like picking up
a hammer today and circling a schoolyard.

I stand back with a pen that exploded on the flight
over and think but don’t write
thoughts that unincorporate
afterthought.

We wait for orange
to go flipflopping along the river, our mustaches
forgivenesses’
tails,
saying brother, brother,
after the war꼭
한잔 하자고
Post-it:
we’ll watch, saltbreathed, as Uncle You-Again
throws a stingray back
into the ocean, the promotional
fountain the others feed from, needing something more
tubular to hack.

The surface takes it

under the darkle
of its wing.

I see where we go when we blink.

I blink in the dark and think that was pointless. I have
empty
eyedropsules,
a floating fishbowl in my hands 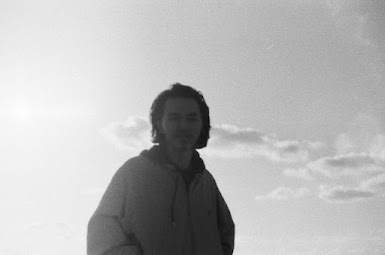 Jed Munson’s [Photo by Keum-ji Son] first chapbook, Newsflash Under Fire, Over the Shoulder, was published with Ugly Duckling Presse in 2021. Silts appeared with above/ground press in 2022. His work has appeared in Conjunctions, P-QUEUE, Full Stop, and others.