II. Everything Everywhere All at Once

In a pace-altering, petrifying, “silent film” scene in Daniels’ 2022 Everything Everywhere All at Once, we are introduced to one node in the multiverse where, we are told, no life was able to form. Most verses go something like this, in fact.

The scene is wide and dry. That is, it’s set on a cliff overlooking a canyon (okay, so it can’t be that dry. Or, it can’t have been dry forever, since water is the “origin” of canyons). The scene is suffused with oranges, tans, rusty reds. And two rocks, both round, are next to each other. They don’t yet have faces (They’re rocks! And they haven’t yet turned around to reveal their googly eyes) but you get the sense – at least I did – that they are looking out over the landscape, not across at each other.[1]

In the scene, Daughter Rock explains the tranquility of the moment to Mother Rock[2]: there’s no chaos, no pain, because there is no life here. But, isn’t the scene teeming with life? This is the emotional apex of the film. There’s text on screen. Yes, text. Dialogue. Linguistic data making and sharing. There’s an affective projection weaving between the two rocks, and we are made to understand that these round (I repeat: round, like planets, googly eyes, bagels, mirrors, cookies, breasts, anuses, and many bellies) stones have a relationship to each other. In this case, mother and daughter. Should I say parent and child?

By what mechanism are the character-rocks siphoned off from the swath of stone that cuts across the landscape of reds, oranges, tans? By what mechanisms is Daughter Rock cut from Mother Rock? Mother from Daughter? A world of apparently unliving stone as object of perception to these two stony centers of emotion, intellect, and communication. Centers of generationality. By what processes were these little spheres broken off, eroded down to smoothness, and bestowed with or grew “liveness”? Or what if we can instead recognize that the whole rocky landscape, the whole canyon, is buzzingly alive?

Generationality of rocks: eruption, sedimentation, erosion, collision, siphoning, shaving, grinding, moving, sliding, breaking, dropping off. How does rock life challenge us to re-think the distribution of generationality as too-simply parent to child to grandchild. In rock life, what gets passed down? Passed up? Passed over? Picked up? Redistributed? Re-melted? Sedimented in or sifted out?

If, as Lorine Niedecker has it, “In every part of every living thing / is stuff that was once rock” then rock runs through me like blood. Rock runs as blood. Then rock has also a human generationality. Then humans sediment. Melt. Ooze. Shave. Not only are rocks not ahistorical, but (human) life necessarily contains ahistoricity as part of its very living matrix. The hardness of rock is better understood as slowness: a historical flow.

See Part 1 of this essay here 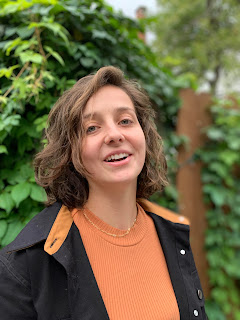 Fay Mtn is the author of the chapbook Body of Water (New Note Poetry) and the artist's book Poem Composed for a Long Book, created in residency at the Western New York Book Art Center. They are a PhD candidate in poetry & poetics in Buffalo, NY.

[1] This is worth more exploration; why was I so sure, as a viewer, that these rocks were “looking” at all? Visuality has a stranglehold on a certain cultural-animal sensorium.

Likewise, why is the scene silent? What interruption would auditory interjection have posed to the claim of deadness? Or, not exactly deadness, but non-livingness, ahistoricity? And why might it be easier to accept textual ahistoricity? Of course, the realm of death is loud. But does it also write?