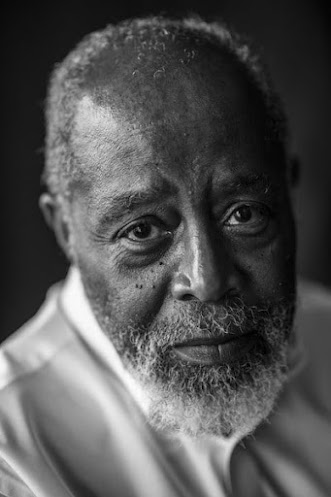 Ed Roberson, born and raised in Pittsburgh, Pennsylvania, is a contemporary poet interested in the environment, visuality, and spirituality. He is the author of numerous collections of poetry, including MPH + Other Road Poems (2021), the chapbook Closest Pronunciation (2013), To See the Earth Before the End of the World (2010), which was a runner up for the Los Angeles Times Poetry Award, The New Wing of the Labyrinth (2009), City Eclogue (2006), and Atmosphere Conditions (1999), which was chosen for the National Poetry Series, and was a finalist for the Lenore Marshall Poetry Prize. He lives in Chicago, where he has taught at the University of Chicago, Columbia College, and Northwestern University.

I’m curious about the way you structure poems, each of which seem to expand out of a single, opening point, usually articulated through your use of titles. What brought you to where you are now, of composing poems as such forms of inquiry, opening and engagement?

I see form as information, structure as information about what it encompasses, an argument; then I see balance as a form of answer.

I first thought of poems as a different way of seeing that enlarged our seeing in ways simpler language couldn’t. Now I’ve begun to see the forms and structures of poetry not just as a way of seeing, or as a discourse in/on a different level, but as a way of discovery, of inquiry, as a way of solving questions or problems. So the ABA form; or the strophe, antistrophe, epode; or the octet, volta, and sestet all come to be methodologies of music, of imageries, of poetry right now.

The way this collection is structured suggests poems that sit together less through an array of narrative propulsion or through-line than as a suite of poems that flow across a broader canvas, allowing for the ebb and flow of subject and lyric. How do your poetry manuscripts, then, form themselves? Have you a particular series of subjects or structures you wish to engage, or do books form more organically?

There is no typical way in which my manuscripts are formed other than the pile in which the poems collect on my desk. My writing style is similarly unorganized—or, rather to say, organic. I write on anything: newspaper or magazine blank spaces, the tear-off section of bills and renewal forms, packaging—anything. I write with anything—ink, pencil—and only later put the writing into the computer. I continue refining the compositions for rhythmical timing (by line and by spacing, open and vertical), for graphic image and form (by line count, repetition, and stanzaic structure), and for music (by reading aloud). Then a final typed copy is made, saving all the revisions. This can take a day or several weeks. I work on several ideas/poems simultaneously.

Are there particular pieces composed through this system that might not fit into the manuscript you are currently working on, but might land in something else down the line? I suppose this question leans into wondering if you compose multiple manuscript-threads simultaneously.

I learned to draw from my dad, who would draw what he was going to build as a way of understanding what he was about to do as much as envisioning his finished box, cabinet, or room extension on the house. I take seeing as a way of explaining or understanding from him. My understanding, and love, of poetry took off like a slingshot when I discovered images and what different figurations could do. My work is visual, yes, but not simply descriptive.

I’m curious to read that you studied painting in your youth. I’m wondering how your engagement in visual art might have informed the structure of how you approach or construct poems?

I seem interested in the language of vision, the rhythms and conceptualizations that go on when seeing and the transformations that occur. So images that talk back and forth, take stands (masks) and work it out or not, is what impels my poems. Hence, the serial poem and its choral, community format. Any image or visual statement can set off a poem, so I’m always open to a poem, but what pile, what discussion, i.e., what manuscript it will join is up to the mind of the group. Yes, multiple threads because I’m always watching, looking at multiple things in a changing world from fluctuating engaged viewpoints.

Have you been writing much in the way of poetry since asked what has changed was completed? What have you been working on since?

I’m writing a lot of art reviews, criticism, which seems in line with the poems’ review and criticism of seeing, of perception and knowledge. I like the way a figure or an image in a poem can line out the knowledge within something while also drawing out the emotional encompass of its mystery.