Peter Ganick is one of the three most important figures in my poetic career, which spans many decades since the '70's. I never met Peter Ganick. If for nothing nothing else, he should be remembered for editing one of the most important, seminal and experimental poetry series of the last century, Potes & Poets. When he accepted a long poem of mine, City of Angels, to be published in the Potes & Poets New Chapbook Series, I felt really honored. But my gratitude exploded when he agreed to publish my highly experimental epic length poem, Madonna Septet (2000). This is a work of 864 pages, divided into 2 physical volumes. Ganick was taken by this work, its staccato delivery automatic writing and its multiple avenues of perspective from the religious to the profane. We worked closely together editing this, and he chose the color schemes for the covers, with their tantric illustration. We soon developed an intense email relationship, covering numerous topics, but mostly about Indian philosophy and to a lesser extent music (George Harrison was our favorite pop musician with his album All things Must Pass). As a result we did a collaborative long poem together, Cosmic Karmic Raga. We published this work under two pseudonyms (his idea), namely Vyasa and Bahina Bai.
Over the years of the new century, he invited me to submit work for online publications, and for various other presses. Most notable was the invitation to publish my new epic work: Comedy , Divine , The (2009). Ostensibly based on Dante's poem, it is structurally the most demanding of my works, and Peter again worked hard editing it and getting all the stanzas correct in their formal appearance. This was published by his new press, Blue Lion Books, in collaboration with a partner in Finland. Like Madonna Septet, the Dante-esque poem was one I thought I would never get published. I credit Ganick for his generosity of spirit and breadth of vision in getting these works into print. I sensed in our email correspondence as well in his own works which he shared with me, and for which I wrote an occasional blurb, that above all Ganick's intuition and genius was based in music. And indeed I once compared one of his works to the music of Archie Shepp. As I said, I never met Peter Ganick, but in a very spiritual way, we had met over and over again in our exchange of words and ideas. Without his guiding genius, a lot of the experimental poetry of the last century might never have seen the light. He was in my opinion a towering and enigmatic figure. He once wrote to me: Life is the same as death. 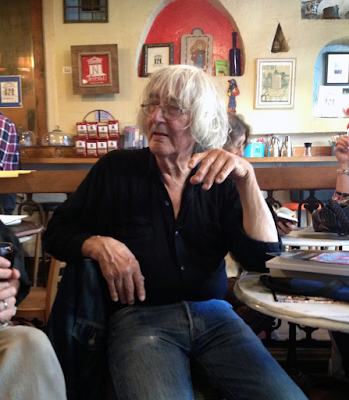 Iván Argüelles is a Mexican-American innovative poet, author of many books of poetry, among them "That" Goddess; Madonna Septet; Comedy , Divine , The; FIAT LUX; Orphic Cantos; Fragments from a Gone World; and, The Rudiments of Poetry. Raised variously in Mexico City DF, Los Angeles, and Rochester MN, he received a degree (BA) in Classics from the University of Chicago; and a degree in Library Science (MLS) from Vanderbilt University. A professional librarian he worked at the New York Public Library and at the Library of the University of California Berkeley. He is co-founder and editor of the now defunct Pantograph Press. Retired now, he resides in Berkeley CA.