in april-july 2020, my friends and i whispered about how things feel. our whispers are here. our transcriptions are here. these are the transcriptions of my own whispers (and ridiculous noodle-singing). the idea was to see how improvisational descriptions of nowbodies might teeter. how they might wobble if we used “you” and asked someone else to catch them. in the end, as with most things, CATCH became a love story. audio rom com, i emailed the protagonists. ghosts at a party.

note: every episode begins with the sound of a basketball bouncing and emilie calling, “catch.”

EPISODE 4: BRAIN FOG
this is how brain fog feels. everything is / the afternoon. dense pastel. rough brightness. the air condenses / into sand at the bottom of your forehead. the sand gets wet. your eyes / collapse. things try to run up / the sand, but everything // everything down

EPISODE 9: YOUR MOM AND YOUR BROTHER
this is how it feels to listen to your mom and your little brother talking on the phone. you’re lying on your bedroom floor. your fingers are in the carpet. you spent a lot of time outside today, so your arms are heavy, and your face is warm. there are two voices talking and laughing, but not with you, and not with each other. they’re talking to other people who are somewhere else, who are maybe also being listened to. by someone who spent a lot of time outside today. whose arms are warm, whose face is heavy.

the dishwasher just started. so maybe now we are underwater.

put your feet on the floor.

can you feel how she listens with her mouth?

EPISODE 12: GRIEVE A MOVIE
this is how it feels for a movie to let your grieve. your eyes are still clenching / onto someone else’s sadness. you curl up / into your own sadness. your own knees and thighs. you stroke / your own head. it’s hard / underneath your hair. it’s soft / underneath your chest. soft / like new things can be.

EPISODE 23: HOW IT FEELS TO BE WITH YOU
in this episode, all of the recordings (except for the singing bath episode, because it is very loud and ridiculous) play at once, giving the ambient feeling of being in a group of people. it’s sometimes sweet, sometimes claustrophobic. at the end, after so much pulling, intertwining, wandering throughout the season, vi-an and trynne’s voices find each other again. every other sound stops abruptly, and episode 15 vi-an, cycling v-ian, says, “and then the edge and then the sky” — as episode 3 vi-an wakes up with trynne and says, “it still feels so special.” vi-an goes on, “and the sun is still rising and it’s beautiful—” as episode 7 trynne, trynne in pain says, “that’s okay.” vi-an: “and it’s sunny and it feels like you’re really starting your day.” she pauses. trynne: “it teaches you to move more slowly.” vi-an: “and you get to work, and you’re ready to start your day.” 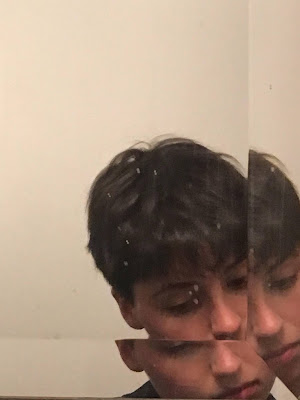