blue stone and pink shale, spikes of yucca reliably green
winter & summer         she thought she knew the place
but didn’t      and waited for the return of her husband

William Carlos Williams’ stiff twigs on the way to the hospital
are a sort of particular spring-brown          universal           speaking to
the many who wonder, what next?         besides growth

it’s probably not even close, the hospital     the woman
who heard the ambulance go by was a fiction       but it scared her
since she hadn’t seen her husband for quite a while

LOOKING SOMETHING UP IN THE DICTIONARY

heavy in the hand, but happy to fall open at any page—

to look up the word laconic which I thought
described some recent poems,  but then I wondered
what laconic actually means.

It turns out it means what I thought it did,
“terseness, sparing of words.”  What a strange thing
it is to open a dictionary inherited via one’s ex-husband
in the long-ago divorce—

& to wonder how he might feel now so far away
to see his grandmother’s handwriting on the flyleaf
in blue fountain-pen ink
some words she’d wanted to look up:

a sales representative for Gilbey’s Gin
doing the rounds of the bars and restaurants
of post-war Vancouver and environs,
coming home late all the time

for dinner, everyone angry, eating
what had gone cold in the waiting period
that seemed, now, an inevitability

nevertheless, he was good at the barbecue grill
and kept at hand a recipe book of cocktails
and was well-spoken with a bit of a posh accent
when he was around

which was seldom.  His scarf still folds neatly
owing to the excellent quality of its fabric.
He’d unwind it as he unbuttoned his coat
and took of his hat & met the furious demeanour
of his wife with some sort of mean posh
comeback, & everyone was miserable. 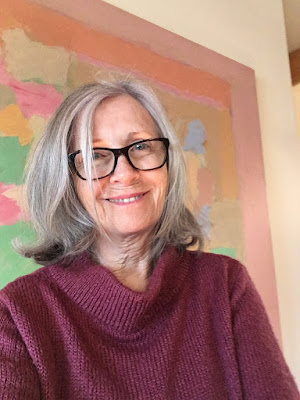