When you come to Lisa Richter’s collection, Nautilus and Bone, you will want to take the time to carefully read the piece that opens the book, “Like a Copper Bell: A Preface, Prologue, or Overture of Sorts.” It gives you the background information that will help you to situate yourself within the context of what the poet calls “an auto/biography in poems.” Here is a gathering of poems that revolves around the life of the Yiddish poet, Anna Margolin. This was her pen name, but her ‘first name’ was Rosa Lebensboym (1887-1952), and she was regarded as one of America’s finest early 20th century Yiddish poets. What Richter does in Nautilus and Bone is imagine a life—in poems—for a woman who was truly fascinating.

Margolin was, as Richter writes: “…a firecracker. A rebel. A rabble-rouser…a flawed, complex character from all accounts. A woman with many lovers, thrice married (or at least, twice-married, once common-law-partnered). A voracious reader and nomad who hobnobbed with the who’s who of her day in Yiddish literary and anarchist circles.” Margolin was an amazingly complex woman, but would never really get the recognition she should have received. She was, really, a woman before her time. In this introduction, Lisa Richter writes that her poems are a “hybrid of fact and fiction,” as she has created a ‘persona’ whose voice speaks clearly and dynamically to the reader from cover to cover. Richter has brought Margolin to life in a way that makes her spirit spring from the page, ushering her out from a number of lost and forgotten years, introducing the reader to Anna in such a way that you sort of fall in love with her gumption and brilliance as you read through the book.

In “Jewess,” a three poem sequence, the poet channels Margolin’s imagined voice in such an artful way, creating images that spill over and over into one another in evocative layers:

Don’t call me Jewess. Call me hellfire and fish-hooks,
the moon as it violets the earth in mollusk-silver shadow,

Later, in the third piece of the sequence, Margolin’s voice speaks of unhooking her tongue, saying “I was born on a jutting arm over the mouth of a volcano,/and raised in the succulent cumulus of heaven.” You cannot sit and read these poems to yourself, silently. No, they deserve to be read out loud, in a rhythmic sort of wave that carries you both into and out of the book itself. You must be willing to time travel a bit here, entering into the life that Anna Margolin lived, moving from place to place, and from love to love.

In “Mother of Exiles: Ellis Island, 5 December 1906,” the poet imagines what it would feel like to emigrate from Europe to America, seeing the Statue of Liberty off to the side of a ship, with a passenger feeling continually seasick, their “insides tipped in a glass bottle” after a rough two week journey across the ocean. In “So Uncommonly Bright for a Girl,” made up of seven small prose paragraphs, the poet writes of a girl who will thankfully “hide nothing” of her intellect: “I slough off residual caring…If I show nothing off, what will/happen to my power.” Then, there is the loveliest and most poignant reflection on heartbreak: “This is what it means to have a body. The idea of the heart breaking./When I think of the word heart I think of a frozen lake cracking, gunshots at point-/blank range. I write it down and little green buds appear on dull branches.” The sequence continues, shifting to how Anna feels when she comes upon her mother purposefully and heartlessly burning her poems in the kitchen so that “the stove fire/is already eating everything I’ve written.” The end of the piece is triumphant, in how Anna says, “My tongue stays vaulted…sensing the faintest flicker of what will/someday become so familiar as to pass unnoticed: a little fire in me,/growing stronger stronger stronger.” This girl will become a woman who is fierce, passionate, and creative.

Margolin was not prudish or Victorian in her sensibilities when it came to sex. She had many lovers, possibly even of both genders, and had two marriages. In “Last Night You Called My Name: For Pavel Kaplan,” Margolin writes of one of her lovers: “Look for me among the stars that salt//the night’s ocean, among the onyx pearls I rip from my throat.” After her second marriage ended, she lived with a fellow poet named Reuben Ayzland, after whom the beautiful crown of sonnets, “Beshert,” is titled.

In the Jewish tradition, as Richter writes in her notes, “the Yiddish word bashert is commonly understood to mean ‘soulmate’ or ‘destiny,’ but does not negate the existence of free will.” There are fifteen sonnets in the “Beshert” suite, and we see Anna’s depth of feeling for her love when she says: “In your absence, I’m shipwrecked, flung into monsters’ mouths, disgorged onto sandbanks…” Then, as a counterpoint of heart, she says: “In your presence, I’m the cypress trees of Palestine,/the date palms fringing Jaffa’s backwater streets.” The imagery is vivid and alive.

There is a photo of Anna Margolin that finds its place right at the very end of Nautilus and Bone. She isn’t a footnote, though. Not by any means. Don’t make that mistake. Rather, Margolin is a strong presence whom you come to know as you read through the poems, and her eyes gaze out at you, unflinching in their intelligence. She comes to life because of Richter’s adept skill at weaving historical fact and research with imagined scenarios and conversations. Nautilus and Bone is a book of poems you will want to read more than once, to trace one woman’s life through Richter’s deftly crafted images and lines. 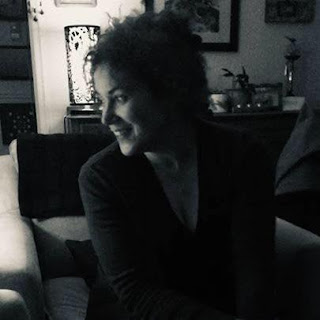