Carl Watts : Deportment: The Poetry of Alice Burdick, selected with an introduction by Alessandro Porco 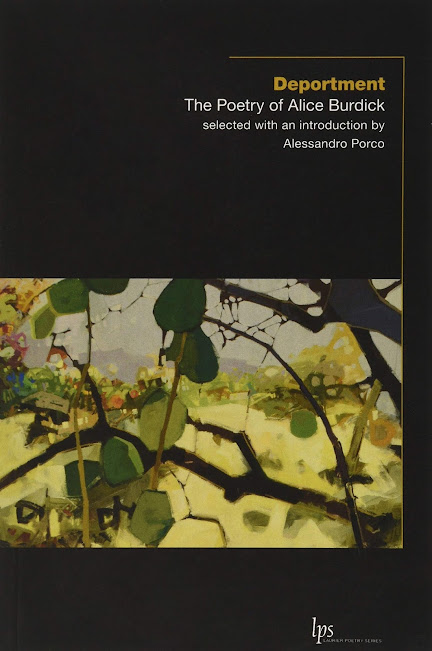 Despite (because of?) its being sharp and stylized yet without many of the alienating or non-referential qualities that often characterize writing that is designated as experimental, Alice Burdick’s poetry hasn’t gotten quite the critical attention one might expect. Accordingly, her range of small-press publications seems like a logical candidate for a selected or some other kind of reintroduction. And, given the brevity of many of her poems as well as the many limited-run pamphlets and chapbooks she’s put out, the Laurier Poetry Series—the titles of which usually run well under a hundred pages—seems like a good fit.

Deportment: The Poetry of Alice Burdick, selected and introduced by Alessandro Porco, succeeds in providing the kind of showcase that might remedy this situation. But, in proposing a logically organized outline of her work, it also sustains the sense that Burdick’s output is somehow too unshapely to be made sense of. The poems pulse in shifting permutations of a few recognizable styles even as they’re couched in a series of releases out of which Porco, in his rigorous and informative introduction, constructs a neat two-part periodization. Burdick’s early small-press period, according to Porco, gives way to her run of perfect-bound books, with this progression roughly analogous to Burdick’s early life in Toronto and subsequent relocation to Nova Scotia.

Porco’s cataloguing of Burdick’s early micropress poetry—that written between 1989 and 2001—masterfully adds illumination (if not outright interpretation) to this descriptive function. Describing this run as showcasing the work of “an irritable satirist and an eccentric elegist” (xii), Porco selects examples from small pamphlet and chapbook editions as well as an unpublished manuscript that shares a title with the present volume. Voice of Interpreter (1991) stands out among these early offerings, its swaths of prose seeming like they’re arguing with themselves even as they exude a cool self-assuredness:

Burdick’s run of small-press books, described in the introduction as more accessible in terms of both content and tone, is represented by sets of between four and six poems from Simple Master (2002), Flutter (2008), Holler (2012), and Book of Short Sentences (2016). And it’s true that, by the time of the latter volume’s “Travelling poem—Pittsburgh,” one finds the sly, combative notes smoothed out into the sonically resonant formalism of lines like

Flight or flight.
Slow rise over the cloudbank,
orange sink of sun which place
places the location
in reference to distance. (46)

But it’s also a blurry evolution that can be glimpsed only in an approximate sense. Any conception of a shift toward longer, more descriptive, or less syntactically fragmented forms has to account for poems like “Remembrance Day, 2011,” the final selection from Holler, which ends with the quippy, Steinian lines “We want there to be a reason / we can like. We want the dead we know / to count, as we don’t count the dead we don’t” (43).

Another blurred set of distinctions becomes evident if one regularly flips back to the table of contents to determine from which publication a poem is drawn. If one doesn’t do so, it’s often difficult to tell where a new publication starts. For instance, Porco takes three poems from Signs Like This (1994), each one similarly short and mockingly aphoristic. (“Space Program” reads, in its entirety, “With the right crutch / at the right time, / you too can insert / your fingers into science / and come up with Answers!” [6].) The first of three poems from the next publication, Fun Venue (1994), looks pretty much the same (and is found on the same page as “Space Program”), but the next two are noticeably longer, with “Tempo Rapture” in particular (“Or a dream which turned into / a real thing. As the birds / on the roof eat challah crumbs / and yell to gather on a thin/thick / telephone wire” [8]) having almost as much in common with the selections from Book of Short Sentences as with the earlier poems. Checking up on these details makes the act of dividing Burdick’s work into clusters of poems from the same source seem almost arbitrary; the poems themselves reveal several styles repeating and augmenting rather than a progression from one thing to another.

It’s a funny, but also productive, way of quantifying Burdick’s output. The order it tries to impose at once obscures and somehow makes comprehensible other odds and ends that don’t appear in the table of contents. 2016’s Chore Choir, with Kingston’s Puddles of Sky Press, for instance, is a pocket-sized, two-page poetic-prose offering that seems like a more clipped and yet more irreverent iteration of the poetics of Holler’s “Mahone Bay rhapsody.” Pleasure Bristles, a chapbook coauthored with Gary Barwin and published by above/ground in the same year as Deportment, disperses Burdick’s tactics further, raising questions about Porco’s conception of a gradual move toward accessibility while also justifying the editor’s selections by further permuting Burdick’s recognizable forms and splicing them Barwin’s.

Burdick’s afterword concludes Deportment with a similar sense of defamiliarized familiarity. It’s disorienting in that she begins abruptly with a vivid description of her earliest memories in a downtown Toronto home that “was filled with language”: “It was audible, in the voices of adults speaking, organizing, laughing, and fighting in our communal home” (55). The backstory at once fills in the blanks among the coolly murmurous mass of the poems and yet somehow exists on a continuum with them. It also, in a fittingly logical and yet paradoxical way, does justice to Porco’s framing of her work as much as it challenges his two-part distinction. Burdick’s here describes her different writing habits after giving birth—her “writing in a very disciplined way after having kids, differently from before kids, because my windows of time became very small” (59). This transition to a “strangely irregular but focused” way of writing seems, at least here, in Burdick’s gently disorienting explanation, like it’s at least as important a turning point in her work as her moves from Toronto and from the micropresses. Is it visible in the poetry? Yes and no; but, after all, we want to count the poems we like, as we don’t count the poems we don’t. 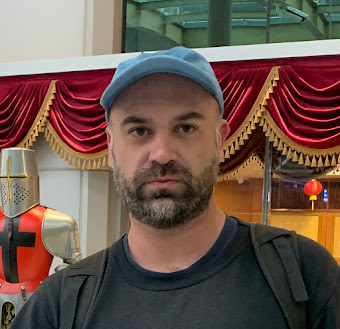 Carl Watts holds a PhD in English from Queen’s University and currently teaches at Huazhong University of Science and Technology. His articles, book reviews, and poems have appeared in various Canadian and American journals. He has published two poetry chapbooks, Reissue (Frog Hollow, 2016) and Originals (Anstruther, 2020), as well as a short monograph, Oblique Identity: Form and Whiteness in Recent Canadian Poetry (Frog Hollow, 2019).