Producing poems on the theme of climate change across a 3-year residency is an exciting, challenging and somewhat daunting task. For almost 12 months now, I have been Poet in Residence at the Monash Climate Change Communication Research Hub (MCCCRH) at Monash University in Melbourne. The focus of the MCCCRH is to communicate climate science in a way that is clear, easy to understand and advocacy-free, with the aim of increasing its accessibility and to cut through misinformation. At the Hub, it is understood that by forming innovative, multidisciplinary connections with writers, musicians, communication specialists, weather forecasters and other professionals and organisations, that climate science can be conveyed in new and creative ways that everyday people can relate to.

Shortly before my residency, I began working on a series of poems set in the year 2042, an envisioned future landscape based on current trajectories. It was the first time, aside from writing ekphrasis poetry, that I had challenged myself to write poems that were purposefully (albeit loosely) thematic. In both this work and my climate change writing, the approach has been to focus on the domestic, everyday and human-centred, presenting a kind of flip side to anthropogenic life. I knew that the primary challenge in writing about climate change would be to explore a very bleak subject in a way that wouldn’t be utterly devoid of hope. So far, my focus has been to confront the reader with the reality of the situation through strong, vivid imagery regarding human and surrounding animal and landscape impacts. I felt that the poems needed to – whatever the specific subjects chosen – look the uncomfortable truth in the eye.

There has always been something greatly poetic and emotionally engaging to me about the clash between humans and nature. So too, the displacement of humans from their customary comfort and routine. As far back as 2011, I depicted the aftermath of cyclone Yasi in Queensland. I had felt moved to write about the Deepwater Horizon oil spill in the US in 2010, and a community on northern Victoria’s border coming together to save a one-thousand-year old tree. Of course, I have written poems unrelated to environmental issues, spanning love, grief, family, suburbia and the city loop train. I soon realised that I would be writing about all of these things still, as the impacts of climate change increasingly enter the domain of our day-to-day lives. We will still be navigating our families and friends, going to work and school and falling in love.

But where to start? In the latter part of 2019, I was invited to attend lectures in climate science communication at Monash. I quietly sat at the back of a lecture theatre with a class of undergraduates, as we were shown scientific and historical graphs, data and images, delivered by scientists, communications experts and knowledge brokers. To say it was confronting would be an understatement. I realised that the climate crisis was, in fact, a worse situation than I had originally thought or imagined. It was a truly heavy realisation. I began looking for the human stories within the scientific data, and finding the relatable images and events that would touch people and create emotional connection and response to the issue.

In one of the lectures, an image of a tired and emaciated polar bear balancing himself on a thin piece of ice was presented. I found myself extremely moved by this direct, inarguable image and knew I would be writing about the plight of this creature. I began researching reports about polar bears being sighted in Russian villages, having travelled from the Arctic to the panic of local people. One such event in Belushya Guba on Novaya Zemlya in Russia was depicted in my poem ‘The Invasion’. ‘Bat Piles’, is a poem told from the point of view of a wildlife officer walking through the piles of dead bats wiped out by heat waves, based on several events in South East Queensland and New South Wales. One likely future scenario that compelled me was that of extreme weather keeping children and families indoors and unable to venture out or play outside. I wrote the poem ‘Into the Heat’ about children craving outside play, including incidences of people ignoring warnings and risking their lives by going out.

Now, in the time of COVID-19, this poem feels more current than futuristic. In Australia, almost immediately before COVID-19 occurred, we had endured the worst bushfire crisis our country had seen. It spanned 12.6 million hectares. For the first time in my life, the air quality was declared hazardous in my Melbourne suburb due to bushfire smoke from country Victoria, and we were encouraged to stay inside and wear masks when leaving the house. Melbourne, a place that had been declared the world’s most liveable city for 7 consecutive years prior, was now suddenly feeling the frightening impacts of extreme weather. Sadly, we knew that we were the lucky Australians whose houses remained intact and with better air quality than Sydney and Canberra to the north of us. During this crisis, which occurred across December 2019 and January 2020, we felt that the future was indeed here.

A large part of my writing on climate has been working on numerous one-line or monostich poems. As the Hub has a strategic preference for short, accessible messaging, and knowing that Instagram poetry has been gaining popularity, I explored the idea of pairing one-line poems with pictorial images in a shareable meme format. So far, I have written 22 one-line poems about climate change and there are more in the works. These have been of great interest beyond those who usually read poetry, including being featured in the Bulletin of the Australian Meteorological and Oceanographic Society (BAMOS). I am also currently working with a fellow member of the Hub on a school lesson plan to communicate climate change in Australian classrooms, where my one-line poems will be studied in Year 7 English classes.

In October 2019, I had the opportunity to be a part of the panel ‘Feeling the Heat: Exploring Compassion in Climate Change’, joining the MCCRH contingent at the History of Emotions Conference at the University of New England in New South Wales. In my first conference paper, I wrote and presented ‘The Emotional Impact of Climate Storytelling Through Poetry’ in the dry and drought-affected New South Wales Highlands, a region very close to where fires were then burning. I vividly recall travelling from Sydney to Armidale in a small plane and looking down at a landscape covered by a vast shadow of smoke.

This month, my new poems have been posted on the MCCCRH site including a poem about the wonder of a child being exposed to grass for the first time (‘Charlotte in her Natural Habitat’), a poem about loggers returning to bushfire-affected areas in Victoria and New South Wales (‘Loggers, Post Fire’) and a poem about the common sight of a displaced koala ‘(Koala Holds Up Traffic’). Next on my agenda is to write a creative response to Assembly for the Future’s project ‘The Things We Did Next’ – a collaborative practice generating a series of artworks and provocations via Zoom that collectively imagine multiple futures.

By poetically responding to current events and imagining and reimagining futures, I hope to hone my writing craft while finding and telling the climate change stories that need to be heard and shared. Hopefully, it will cause one or two or more people to think more deeply about climate change and how a single species’ extinction or a burning tree affects us all.

The climate change poems I have written to date can be read here, with more poems to be added in May and November every year until July 2022. 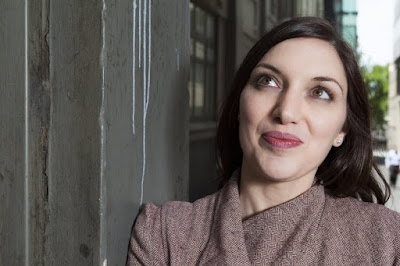 Amanda Anastasi is an Australian poet whose work has appeared on the walls of Prahran’s Artists Lane in Melbourne to The Massachusetts Review. Her debut poetry collection was 2012 and other poems. Amanda has been the recipient of a Wheeler Centre Hot Desk Fellowship and is currently Poet in Residence at the Monash Climate Change Communication Research Hub.